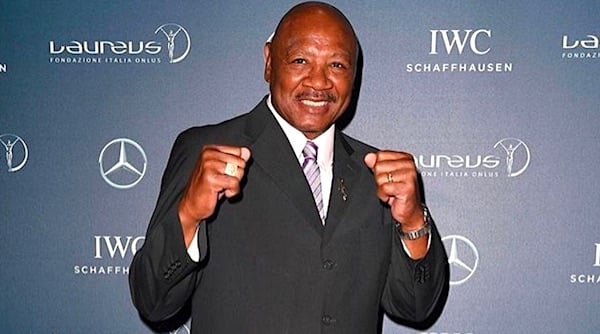 Boxing legend Marvelous Marvin Hagler died at the age of 66 Saturday night, and an online battle has erupted over reports his death was a direct result of getting "the vaccine."

Hearns' full message on Instagram stated: "A real true warrior Pray for the king and his family.. he's in ICU fighting the after effects of the vaccine! He'll be just fine but we could use the positive energy and Prayer for his Full Recovery !" 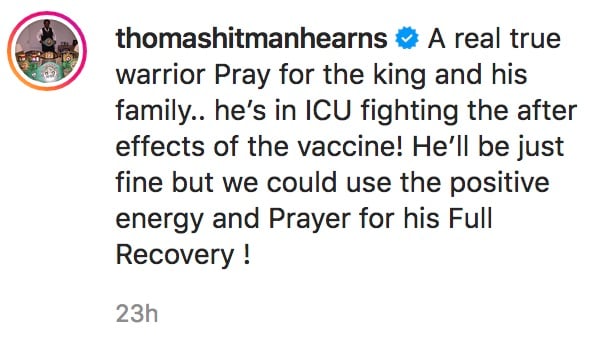 A few hours after that prayer request, Hagler's wife Kay announced her husband's demise on Facebook, without mentioning the cause of death.

"I am sorry to make a very sad announcement. Today unfortunately my beloved husband Marvelous Marvin passed away unexpectedly at his home here in New Hampshire. Our family requests that you respect our privacy during this difficult time," she wrote.

A post on Hagler's website stated: "We are very sad to report that Marvelous Marvin Hagler died on March 13 of natural causes near his home in New Hampshire. He was a champion until the end. His family asks for privacy at this time of sorrow."

Social media erupted, with one commenter stating: "Im proper gutted!! the Great Marvin Hagler dies after taking the vaccine! Please do your own research before making a decision on putting something in your body that has not been tested properly & we r being used as the guinea pigs & not told the #Truth about #vaccine."

Im proper gutted!! the Great Marvin Hagler dies after taking the vaccine!
Please do your own research before making a decision on putting something in your body that has not been tested properly & we r being used as the guinea pigs & not told the #Truth about #vaccine pic.twitter.com/5PQdJGU9sI

In a later posting on his Instagram Stories, Hearns stressed he wasn't voicing an anti-vaccine message.

"Allow us to have our peace. Our love and respect to Marvin and his family, this is not an anti vaccine campaign … It's outrageous to have that in mind during the passing of a King, Legend, Father, Husband and so much more," Hearns wrote.

From 1980 to 1987, Hagler dominated his sport as the undisputed middleweight champion, racking up 52 knockouts in his career. Some of his high-profile matchups were with Hearns, Sugar Ray Leonard, and Roberto Duran.