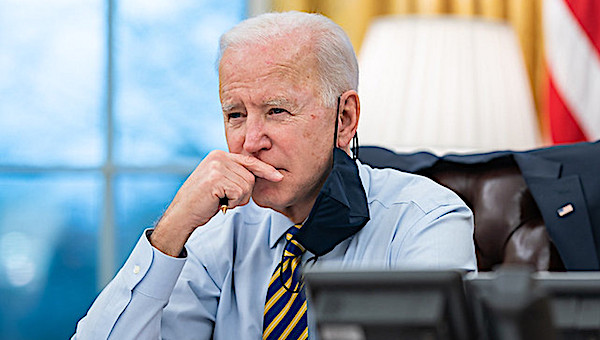 President Joe Biden gets briefed by Liz Sherwood Randall, Julie Rodriguez and participates in a conference phone call with governors affected by the snowstorm in the middle of the country in the Oval Office, Feb. 16, 2021, in Washington. (Official White House photo by Lawrence Jackson)

First of all, I must ask what Joe Biden has against Neanderthals.

Even worse, what does Biden have against "Neanderthal thinking"?

In case you missed it, his disparaging reference to Texas Gov. Greg Abbott and Mississippi Gov. Tate Reeves last week came because of their decision to open up their states and disobey Biden's illegal mandatory face-mask edict.

"We are on the cusp of being able to fundamentally change the nature of this disease because of the way in which we're able to get vaccines in people's arms," Biden said. "We've been able to move that all the way up to the end of May to have enough for every American to get – every adult American to get a shot. And the last thing – the last thing we need is Neanderthal thinking that, in the meantime, ‘Everything is fine, take off your mask.'"

You may be surprised by my sensitivity not just to this faux pas by Biden, but to this blatant "racism." That's right, I said "racism."

Perhaps you think Neanderthals are extinct, or that they bred their way into the line of humans to the tune of 2-3% – or maybe, like me, you don't even believe Neanderthals ever existed.

But Biden clearly does.

He believes human beings existed 40,000 years ago, 300,000 years ago, maybe 1 million years ago. In other words, he believes in evolution – not because he is educated, but because he trusts scientists to know things they cannot possibly know. He also does not trust God when he clearly tells us all life – human and animal – began less than 6,000 years ago when He created Adam and Eve. I've never heard anything that could cause me to doubt that fact.

So why does the fact that Joe Biden believes in evolution and Neanderthals cause me to charge him with "racism" now?

He's a racist for the following reasons and more:

That's right. What caused Biden to reflexively call his political opponents "Neanderthals" was his nature. He will assuredly do it again, if he speaks more often. He hasn't held a formal press conference since he was sworn in as president, a longer silence than any of his predecessors in the last 100 years.

How was "Neanderthals" used to describe Abbott and Tate? You were supposed to think of the "cave men" illustrations you saw in schoolbooks. The drawings evinced "brutish"-looking people, sluggardly, not human. That's how Biden described two U.S. governors. Imagine that.

And to top it off, Neanderthals were supposed to be an inferior race which developed in Africa before moving into the Middle East and Europe! Once a racist, always a racist.

Does that not make Joe Biden a "white supremacist?"

Joseph Farah
Joseph Farah is founder, editor and chief executive officer of WND. He is the author or co-author of 13 books that have sold more than 5 million copies, including his latest, "The Gospel in Every Book of the Old Testament." Before launching WND as the first independent online news outlet in 1997, he served as editor in chief of major market dailies including the legendary Sacramento Union.
@JosephFarah
What if Mar-a-Lago raid is about banning Trump in 2024 – or worse?
Why WND has been DEMONETIZED by Big Tech
SCOTUS should revisit the ban on daily school prayer
Biden planning to 'protect' us from cash – beginning Dec. 13!
The FBI and Deep State are at war with America
See more...