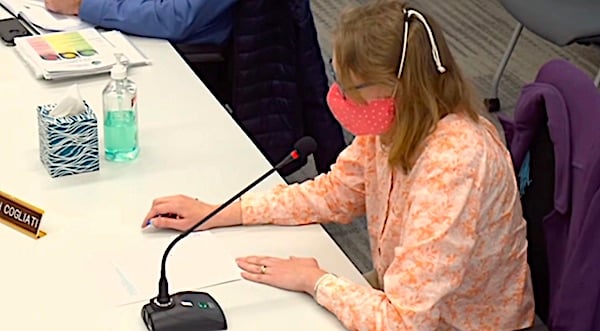 A video shows a masked school board member at a meeting of the trustees for Idaho Falls District 91 gasping for air while arguing that the school district should continue to mandate mask-wearing.

The Red State Nation blog said it was Trustee Elizabeth Cogliati who was forced to take long pauses between words as she argued for the masks.

The report noted there's no official evidence that a mask reduces oxygen levels, but "when you wear a mask, particularly if you have an N95 mask, it can make you feel like it is more difficult to catch your breath."

"A mask offers some resistance to the usual way of breathing, making it seem more difficult to catch your breath. The feeling is more a psychological one than a physical problem with breathing, according to medical personnel," the report said.

The report said the woman "almost passed out, whether it was all in her head or the lack of oxygen we gonna let you to decide."

See an excerpt of the video:

The National File described her as "becoming short of breath and taking long pauses between words."

The situation developed as the board discussed continuing a mask mandate.

"Member Elizabeth Cogliati became short of breath and struggled to speak while wearing a mask and also arguing for mandatory masks, prompting media to declare that she 'almost passed out while wearing the face mask,'" the report said.

Chairman Lara Hill noted the CDC has insisted that schools continue mask mandates, but Trustee Paul Haacke asked many times the CDC had visited the schools and why nearby districts without mandates had results similar to those in Idaho Falls.

At that point, Cogliati interrupted to admit that the CDC does not visit schools.

Haacke responded: "Exactly. That’s my point. They are creating regulations."

She then was loudly interrupted by an upset Cogliati.

The National File reported that at that point Cogliati "appeared to have difficulty breathing through her pink face mask, and began taking deep breaths and taking long pauses between words."

"They don’t need to visit our school district," she said, "to make recommendations … for everyone … and … they … currently have … recommendations out that with the current level … of transmission … in Bonneville County … that we should be in hy … brid … for the elementary schools … and virtual … for … middle schools and high schools."

The trustees eventually voted to keep the mask mandate.