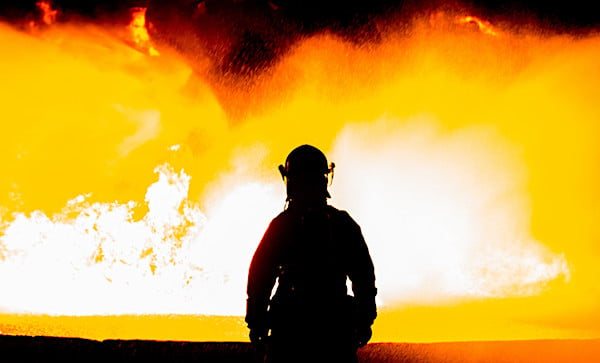 Thousands of “panhandlers” in oversized suspenders camp outside of town squares and churches and major intersections every Labor Day. Instead of fast food cups, they plead with passersby to donate what they can into large rubber galoshes, exhorting them to "Fill the boot!" Perhaps that is why they are so well-received by busy motorists. It also helps that these men are standing in front of fire engines.

The International Association of Fire Fighters (IAFF) has turned this spectacle into a wildly successful charity benefit, generating about $20 million each year for the Muscular Dystrophy Association. But a series of multi-million dollar payments from the charity to the scandal-plagued labor union have led some fire fighters and union officials to question the arrangement.

Since 2005 the charity and its affiliates have forked over more than $10 million to IAFF headquarters, which represents approximately 300,000 fire fighters nationwide, according to federal LM2 labor filings. In some cases, the union has been the top recipient of MDA cash; the $1.15 million it received in 2018 was about four times higher than the most lucrative grants the charity awarded to top hospitals, university labs, and other medical researchers.

Such large payments are unusual in the philanthropic world.

MDA, however, has not listed any payments to IAFF in 990 disclosure filings to the IRS, though it lists the dozens of smaller grants that it pays out each year.

The union said the payments are used to cover fundraising costs and other expenses related to Fill the Boot. Although the IAFF has been supporting MDA since 1954—raising $671 million for the charity—the money flowed one-way until 1988. Since then the union has received dozens of payments from the charity becoming not just a funder but an active participant in the cause, according to a spokesman.

"The IAFF is proud to be MDA’s largest fundraising partner," a union spokesman said. "IAFF also provides MDA with assistance in messaging, marketing and other administration of the program to that help it to be a continued success."

Some fire fighters are uncomfortable with arrangement, which has become a divisive issue within the union. Sean Mitchell, a captain in the Nantucket Fire Department and secretary treasurer of IAFF Local 2509, found the payments alarming. He participated in the program several times since joining the department in 2006, though the local union has not conducted Fill the Boot in the past several years. Local unions, rather than national, shouldered the burden for the fundraisers, providing Fill the Boot with equipment, man-hours, and other resources. Donations were sent directly to the charity, rather than handled through IAFF.

"We still haven't heard a valid reason as to why these payments were made from the MDA," Mitchell said. "Local unions make donations all year long and don’t expect anything in return."

It is not clear why the union first began receiving what it classified as reimbursements in 1988. Individual payments began showing up publicly only in 2005 when the Department of Labor instituted new disclosure requirements. Records for that year indicate an $18,000 payment from MDA-Canada in "non-itemized expenses," as well as 13 payments totaling $868,500 that were classified as special reimbursements. The size and classification of MDA payments varied over the next decade, reaching its peak in 2016 when the union received $1.4 million in four payments—classified as "Contributions" – from the association and another $18,000 in non-itemized expenses from the Canadian affiliate.

The payments stabilized beginning in March of 2017 when the charity began sending quarterly installments of $287,500. The size of the check may have stabilized, but the union continued to shift the explanation for the expenses. The payments were reported to the Department of Labor as "contributions" in 2017 and "donations" in 2018. Its 2019 report classifies them as "A/R MDA " before it settled on "service reimbursement" in 2020 to describe a December 2019 payment. The union waived all fees for 2020 because of the coronavirus.

The IAFF, which declined to provide details of the payments, maintains that every payment from both the charity and its affiliates can be accounted for in the services it renders to MDA, including office space in its $2 million Washington, D.C. headquarters located just two blocks from the White House. The charity maintains its own office in the D.C. suburbs right across the street from the Reston National Golf Course.

MDA raised more than $103 million in 2018, according to its most recently available IRS records. It spent more than $77 million on program services, including $26 million in grants and $16 million in fundraising expenses. IAFF's $1.15 million payouts on the year would account for roughly 7 percent of all of the charity's expenses, which would have made it a top individual vendor or charitable recipient in 2018. The union's relationship with MDA, however, is not acknowledged in the 990. MDA declined to comment on the nature of the payments, nor did it offer an explanation for why it did not list IAFF on 990 forms.

"The Fill the Boot program is in-line with industry standards for partnerships of this size regarding the costs associated with raising critical funds," an MDA spokesperson said. "Our relationship with IAFF spans the national union and locals across the country and we are indebted to all those fire fighters who devote their time and energies on behalf of MDA."

The union's financial activities have been under the microscope since March when national treasurer Ed Kelly released a report which found $6 million in missing funds and alleged that union president Harold Schaitberger inappropriately took nearly $1 million from an IAFF pension fund. An internal audit released in September cleared Schaitberger of any wrongdoing, but the longtime labor leader bowed out of his re-election bid after the federal government announced its own probe.

The open president's seat—for which Kelly is now a top contender—has set the stage for one of the most divisive election seasons in union history. The MDA payments have emerged as a major issue for many campaigning for leadership positions. Jake Lemonda, a candidate for treasurer from the New York City Fire Department, publicly announced in a widely read fire fighter's blog that he would review the arrangement.

"The numbers reported seem excessive and unreasonable. It appears that almost all of the work is performed by the membership in reaching out within the communities where they serve," he said in December. "I cannot imagine what could possibly be the associated expense to the IAFF."

Greg Markley, a Washington D.C. fire fighter running for treasurer, called the payments "ridiculous" in an interview with the blog. He has objected to any reimbursements at past conventions, only for the payments to continue. Markley said the issue is best looked at from the ground up, rather than comparing the seven-figure payments to the hundreds of millions of dollars raised by IAFF members over the years.

"Could you imagine that we told the first 50 locals that raised $20,000 each … that the monies they worked hard to raise were actually going to the IAFF for overhead and nothing to MDA? I think we would have a major uprising in our union," he said. "Our members raised those dollars directly for MDA only for it to be given back to the IAFF."

Mitchell, the Nantucket union official, said the service reimbursement explanation is not adequate for the amount of money at stake. Local unions, not national, are directly responsible for shipping donations to the charity. Fire fighters are operating under the impression that every dime raised goes to MDA "to help kids." The payments undermine the message, according to Mitchell.

"I think if there was valid reason for it, they would be more upfront and would have provided members with that explanation," he said. "I don’t think [fundraising reimbursements] is a valid reason."

Union critics say that the public and fire fighters deserve to know the nature of payments. Frank Ricci, a retired New Haven, Connecticut, fire fighter and former president of IAFF Local 825, said he was alarmed by the shifting classifications of MDA payments in labor filings.

"I was unable to find any public mention of these 'donations or contributions' made either by the IAFF or the MDA," Ricci said. "If this all was above board wouldn’t this be celebrated or is there something darker at play here, is this a legal or possibly illegal shakedown or scheme to bilk millions of dollars from sick and dying kids stricken with a horrible disease? These questions beg to be investigated."

Ricci has been one of the most politically active fire fighters in the country, having served as the lead plaintiff in one of the Supreme Court's most contentious affirmative action cases in the 21st century. He successfully sued the New Haven Fire Department in 2009 when the high court ruled that the city illegally discriminated against Ricci and 19 white and Hispanic fire fighters who were denied promotions because no black fire fighters had passed a qualification test. Ricci was back in court when he led the local union to cut ties with IAFF's state affiliate in 2016. A state court ruled in his favor in 2018.  Ricci, who now works as a strategist for the Connecticut-based Yankee Institute for Public Policy, has set his sights on union transparency laws. He has publicly called on the Department of Labor to mandate further scrutiny in financial filings, in order to force union officials to better explain their expenses to members, regulators, and the general public.

"It is important to realize the MDA issue only came to light because of required reporting by the Department of Labor LM2s," Ricci said. "These limited regulations are grossly inadequate based on the need for transparency."

Mitchell, who will be a delegate when IAFF announces its new president in March, said that even without additional disclosure laws, fire fighters deserve to hear the details behind the payments.

"Part of the issue is the lack of transparency at the IAFF and the leadership," he said. "The fire fighters out collecting money for the MDA, they should be made aware that some of the money is coming back to national."