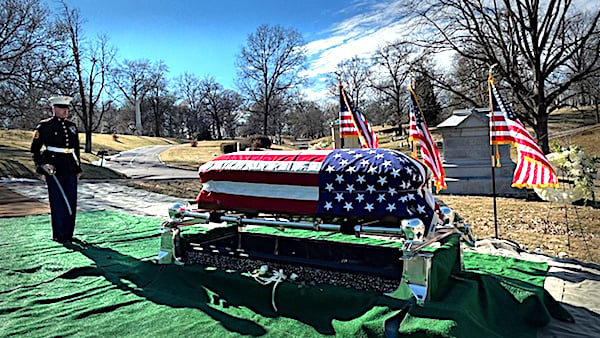 Kathryn Limbaugh says she and her late husband, Rush Limbaugh, the most celebrated talk-radio host in generations, planned his funeral together in the months that followed his diagnosis of lung cancer, and he thought it would be "so cool."

He hoped he would be invited, and she promised him a "front-row seat."

Kathryn Limbaugh's comments about the funeral and her husband's final resting place in a historic cemetery in St. Louis came on Tuesday's program, which was guest-hosted by Todd Herman.

An audio recording of a conversation between the two was posted online.

KATHRYN: So I am walking with Rush and explaining to him his event, and I told him all he has to do is show up, which I’ve also arranged. (laughing)

RUSH: (chuckles) Yeah, and it is an event, and it’s awesome! I mean, I hope you get invited to it.

RUSH: I mean, what she just described to me is incredible. Sorry I’m gonna miss it. But —

RUSH: I can’t believe I’m sitting here talking to her about my funeral.

On the program Tuesday, she explained they decided to be "open and direct" about the plans.

"I told Rush that he is just shy of a president, and presidents get this kind of treatment; so he deserves that," she said.

"It's gonna be beautiful. Be there or be square. Rush, don’t be late."

"It's a very difficult time. But I really, truly feel we are all going through this process together, and it’s very much a process. And I think it helps us to all be together and grieve in a sense and keep our Rush with us in that way."

She said the couple called the funeral they were planning the "event."

"Obviously it came a lot sooner than we would have hoped and liked, but we did have a plan in place," she said.

The only thing that fell short was the number of friends they could invite.

She recounted the burial at the Bellefontaine cemetery in St. Louis. 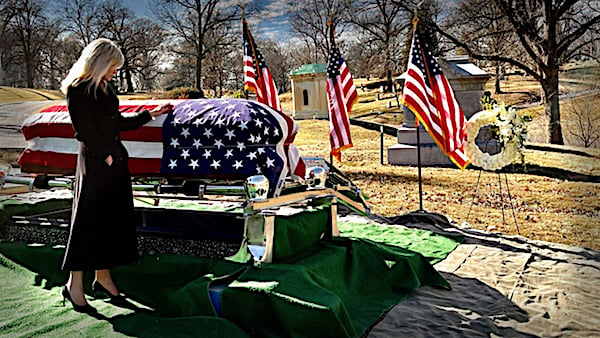 "It was an absolutely gorgeous day, slightly chilly, but nothing like the snow that Missouri had had a few days prior. The sun was shining brightly and the really crisp air, and this cemetery is very historic. It has a lot of historic figures such as William Clark of Lewis and Clark expedition and others," she said. "And just to picture it, it might remind you a bit of Arlington or other historic cemeteries around the world, with winding hills and pathways and big trees that are bare right now but in the upcoming months they will be full and green and very lovely to walk around."

His body was escorted from the Palm Beach funeral to a transport plane. On landing in St. Louis, a procession followed.

"So he was never left alone in any aspect of this, and then once we got to the cemetery there was a horse-drawn carriage waiting for him, and it was simply stunning," she said.

"And it was just stunning, if you can imagine, looking forward through a winding road to see this beautiful carriage with Rush in it and then flags around his gravesite. So as we approached the gravesite you could see these powerful American flags waving in the wind and the sun was shining directly on that spot."

She said Rush didn't know his Feb. 2 broadcast would be his last.

"He just got a little bit sicker and sicker by the day, and we had to take a bit of an emergency action for him. But the blessing in this is that he knew he was going to heaven. But he didn’t know that that was his final show, and didn’t know that he would not be speaking with all of you directly again. So that does provide some comfort that it was peaceful and unknown," she said.

She said Rush knew he was going to heaven.

"We talked about it all the time, and you may recall he always said practically every show that he thanked God for being able to wake up that day," she said. "And that’s really how he took it, one day at a time, and knew that it was God’s plan and we would go forward as we needed to. But he knew ultimately that he would return to heaven and be greeted by everyone who’d gone before him."

She recalled the presentation of the Presidential Medal of Freedom from President Trump last winter.

"He was truly and utterly touched by that. … And what you saw on TV was exactly how he was feeling. He was stunned, thinking, 'I’m just a young man from Cape Girardeau starting out, and here I am now.' It was tremendous. And we are deeply, deeply appreciative to President Trump for that honor."