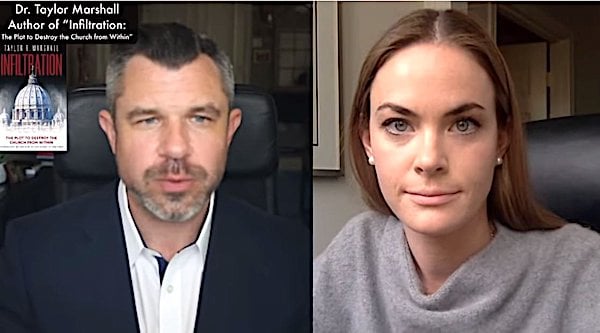 A pregnant mother says she was hauled out of her Catholic church in Dallas by police officers during Mass after the priest called to complain she was not wearing a mask.

Deirdre Hairston, who was holding a 1-year-old baby, said the officer told her the church was a "business" that has authority over the people in its building, and the business didn't want her there, she said in a podcast interview with Taylor Marshall, a Catholic commentator.

She said the priest, Father Ryan, approached her during the service and threatened to call police if she didn't put on a mask.

Outside the church, an usher ran to her car and took photographs of her license plate. The officers issued her a ticket for trespassing.

Hairston described the incident to Taylor Marshall on his podcast:

The Diocese of Dallas released a statement alleging she was "issued a trespass warning."

"The pastor of the parish has required masks at mass out of concern for the health and welfare of his entire congregation," the statement said. "Canon law grants pastors jurisdiction over their parishes, and while the bishop has not mandated masks for every parish, he has left these specific details to the pastors of the diocese, adding that he expects the faithful to wear masks out of charity and concern for others. We recognize that not everyone can wear masks, but that those who can, should."

The statement said the diocese is looking into the incident.

Hairston said three police officers were waiting for her at her seat when she returned from receiving the eucharist, which still was on her tongue.

"Am I getting arrested?" she asked.

"Not right now. But if you don't listen you will be," the officer said.

"They write me up a ticket for trespassing and he's [an usher] yelling in the background 'write her up! write her up!'" she said.

Unreal: Pregnant Catholic Woman Removed by Police DURING HOLY MASS for not wearing a mask – Was Ratted out by her own PASTOR! (VIDEO)https://t.co/oin92OjBvs

"I was socially distanced and it really just proves all the more that this is a political statement,” Hairston said. “It’s about complying and agreeing. It’s not about health and that makes me really mad.

"I told her (the officer) this isn’t McDonalds,” said Hairston. “This is a sanctuary. This is a place of worship. This isn’t a business.”