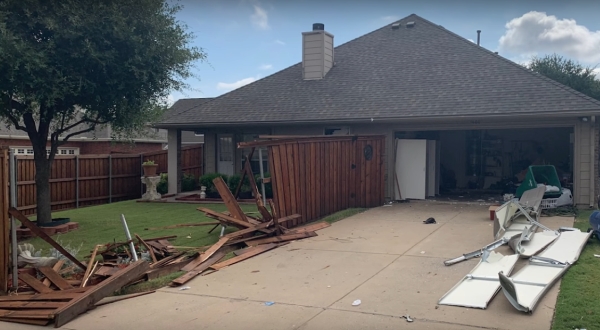 A Texas city whose SWAT team destroyed a home in its effort to capture a fugitive is being sued for damages.

McKinney, Texas, authorities have refused to pay for the damage homeowner Vicki Baker was forced to repair, according to the Institute for Justice.

She had to spend more than $50,000 and months of time repairing the structure after the SWAT team "used tear gas grenades, explosives and an armored vehicle to utterly destroy the home."

They called it "shock and awe," IJ said.

But the shock was for Baker, who was told by her insurance company that the city authorities had "immunity" and were leaving her to pay for the damage they had done.

A fugitive had taken refuge in a second home Baker owned, and authorities after the smoke cleared left the building uninhabitable.

The house had been under contract, but the buyer walked away.

Although her home later did sell, it was for much less than the original contract had set.

So she's working with IJ.

"In America, ‘if you break it, you buy it,’” said IJ Attorney Jeff Redfern. “The McKinney SWAT team didn’t just break Vicki’s home—they destroyed it. Now it is time for them to pay for the damage they caused.”

The case in the Eastern District of Texas federal court argues McKinney’s refusal to pay for the damage violates that tTakings causes of both the U.S. and Texas Constitutions.

“The United States and Texas Constitutions make it clear that when the government takes property, whether it’s for a road or in capturing a suspect on behalf of the public, the government must compensate the owner,” said Suranjan Sen, a fellow at the Institute for Justice. “Taking a fugitive off the streets benefits everyone, so the cost of the damages caused by the SWAT team should be borne by everyone, not Vicki alone.”

“I appreciate that the police did what they thought was necessary to protect the community,” Vicki said. “But it’s unfair to place the costs—replacing or redoing all of my flooring, the burst pipes, the damaged roof, the blown-out garage door, the broken doors, the toppled fence—on me, just because the guy happened to pick my house and not someone else’s.”

IJ previously fought a similar battle over a home destroyed in Greenwood Village, Colorado, when a fugitive broke in and staged a standoff with police.

The homeowner, Leo Lech, sued, but his claim was rejected by the 10th U.S. Circuit Court of Appeals. Lech appealed to the Supreme Court, but the justices refused to step into the dispute.

IJ said the outcome of the case is "dangerous, and it is un-American," and the organization pledged to continuing the fight to overturn the precedent.