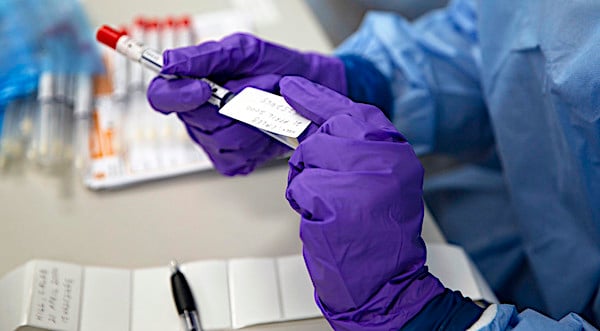 A technician labels COVID-19 tests that were administered to Marines assigned to Marine Rotational Force–Darwin at Royal Australian Air Force Base Darwin in the Northern Territory, Australia, June 16, 2020. The test was administered to Marines after they arrived from California. They will be quarantined for 14 days and undergo an additional test before quarantine release. No Marines tested positive for COVID-19. (U.S. Marine Corps photo by Lance Cpl. Natalie Greenwood)

The World Health Organization is defending its appointment of a U.S. doctor with prior financial ties to the Wuhan Institute of Virology (WIV) to be a part of its investigative team that probed the origins of COVID-19 in China in early 2021.

Peter Daszak’s involvement in the WHO’s investigative panel has been described as a conflict of interest by U.S.-based epidemiologists and medical groups. Prior to the pandemic, Daszak, as president of the nonprofit group EcoHealth Alliance, routed $600,000 in taxpayer funds to the WIV in the form of National Institutes of Health subgrants to fund studies into bat-based coronaviruses.

And during the early stages of the pandemic, Daszak orchestrated a statement published in The Lancet medical journal that condemned “conspiracy theories” suggesting COVID-19 does not have a natural origin. A spokesperson for Daszak later told The Wall Street Journal that the statement was meant to protect Chinese scientists from “online harassment.”

Despite his prior connections to the WIV, which is at the center of growing speculation that it could have unintentionally leaked COVID-19 into the human population, the WHO appointed Daszak to be the sole-U.S. representative in its 10-person panel that investigated the pandemic’s origins in China in January and February.

The WHO did not return multiple requests for comment asking about Daszak’s alleged conflicts of interest, however, it did provide a statement defending his inclusion in its COVID-19 origins investigative panel.

“While selecting international experts, we wanted to ensure a well-represented international team with geographic and topic area expertise balance, as we would do for any other team leading on international scientific studies,” WHO spokesperson Tarik Jasarevic told the Daily Caller News Foundation.

The WHO panel announced on Feb. 9 at the conclusion of its investigation in China that it was “highly unlikely” that COVID-19 could have leaked from the WIV, which was conducting risky gain-of-function research on bat-based coronaviruses prior to the initial outbreak of the virus. Instead, the panel announced it will focus future research efforts into other origin theories, including the China-favored theory that the virus could have arrived in Wuhan via frozen food imported from Italy.

The WHO panel has yet to release a report or even an official summary of its investigation in China. Daszak tweeted less than a day after the panel announced its conclusions that the White House ought to blindly trust the WHO’s determination that the virus likely did not leak from the WIV before having the opportunity to review the underlying data.

Well now this????. @JoeBiden has to look tough on China. Please don’t rely too much on US intel: increasingly disengaged under Trump & frankly wrong on many aspects. Happy to help WH w/ their quest to verify, but don’t forget it’s “TRUST” then “VERIFY”! https://t.co/ukaNAkDfEG

Daszak told Washington Post columnist Josh Rogin in April that he has “no conflicts of interest” in working to defend the WIV and its lead bat-based coronavirus researcher Shi Zhengli against scrutiny.

“I realize that many of the scientists I collaborate with work directly for the Chinese Govt including Zhengli … My only interest in not having Zhengli implicated in this is that I am extremely confident she has done nothing wrong,” Daszak said.

Rutgers University professor of chemical biology Richard H. Ebright said in April it “would be hard to imagine a more brazen lie” that Daszak has no conflict of interest with the WIV.

Ebright told the DCNF in February that the WHO’s COVID-19 origins investigation “was a charade. It has no credibility. Its members were willing-and, in at least one case, eager-participants in disinformation.”

The AIDS Healthcare Foundation called on the WHO to disband its COVID-19 origins investigative team in February, claiming Daszak’s conflicts of interest tainted its investigation.

“For the WHO investigation in Wuhan to stand up to scientific scrutiny, neutrality is a must,” AIDS Healthcare Foundation President Michael Weinstein said in a statement. “Dr. Daszak has a clear-cut conflict of interest that should’ve disqualified him from participation on the WHO team. The fact the WHO sanctioned it in the first place is completely out of line.”

“Now, any conclusions of the investigation will be tainted by one more fragment of uncertainty,” Weinstein said.