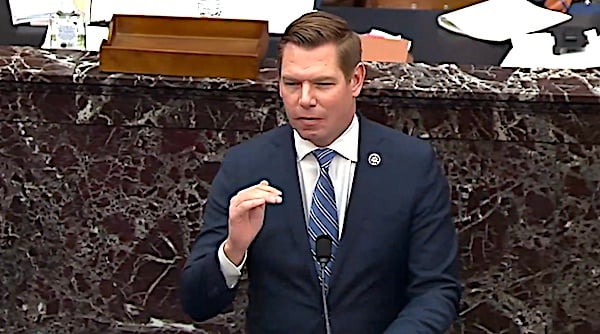 A new effort has been launched to remove Rep. Eric Swalwell, D-Calif., from the House Intelligence Committee because of his relationship with a known Chinese spy.

The American Center for Law and Justice is suing the federal government to obtain information about the relationship. And House Minority Leader Kevin McCarthy says he will file a resolution to remove Swalwell from the panel.

Swalwell, who was a House manager in both of Speaker Nancy Pelosi's impeachment trials against President Trump, was found to have had a direct connection with a Chinese communist spy at about the time he was named a member of the House Intelligence Committee.

This week, House Minority Leader Kevin McCarthy promised a resolution to remove Swalwell from the committee, which would restrict his access to classified information.

Pelosi just reappointed Eric Swalwell to the Intelligence Committee. Based on the briefing she and I received together, Swalwell should not be on the panel in charge of guarding our nation's secrets.

Next week, I will offer a resolution to remove him from the Intel Committee.

The success of the resolution would depend on the GOP convincing only a handful of Democrats, who have a slim majority in the House, to join them.

The Washington Examiner reported McCarthy said Swalwell "should not be on the panel in charge of guarding our nation's secrets."

Fang was working with China's Ministry of State Security before she left the U.S. several years ago.

But Swalwell has declined to provide details of his relationship with her.

The FBI delivered to McCarthy and Pelosi last December a briefing on their information about Swalwell but the information remain secret.

After hearing the information, however, McCarthy said there's not reason why another Democrat can't take Swalwell's place

A number of military and intelligence experts have expressed concern.

Retired Navy Brig Gen. Rob Spalding told the Washington Examiner: "These are types of relationships that if I, a military member, had would be fired or possibly prosecuted. Reporting it to authorities would just mean the end of my career. If you’re gonna sit on the intel committee and you have these kinds of relationships, you should be off these committees. This is just common practice. You know what the Chinese do? You won’t even be part of the government if you have these relationships."

The Communist Party-sponsored state media in China has defended Swalwell.