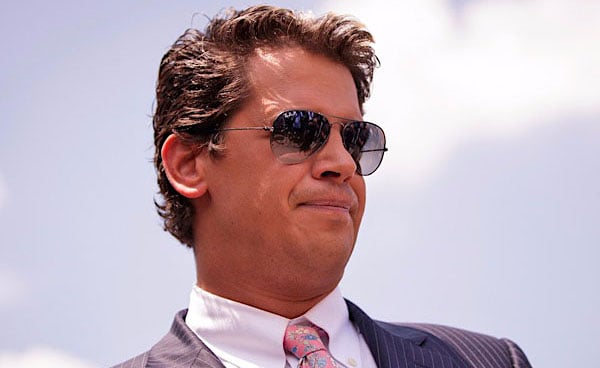 After declaring he is "ex-gay," Milo Yiannopoulos announced he plans to open a "reparative therapy" center aimed at helping "other people go through the same journey that I'm on myself."

In a recent interview with LifeSiteNews, the man described by his critics as a "right-wing provocateur" told of a dramatic change in his life through his faith in Jesus Christ.

Now, the New York Post reports, the bestselling author and former Breitbart editor plans to open a center that will conduct research and offer a residential program and possibly an outpatient clinic

"I see this as a sort of blend of research, center and treatment," he said. "That’s not really hugely unlike a Planned Parenthood in that respect."

He said he calls himself "ex-gay" to goad critics.

"'Ex-gay' is a silly expression but it has the virtues of slotting into a print headline neatly and absolutely enraging the opposition. Celibacy is a modest and achievable middle-term goal; naturally, in the end, my aspiration would be to take it all the way," he told the Post.

Yiannopoulos said a "Christian renaissance" was taking place in the U.S. and raising funds for the proposed clinic is proceeding amid resistance to LBGTQ activism.

"This has been the easiest thing to raise money for that I’ve ever done. There is an enormous demand for this among people who believe they’ve been led astray by — it sounds silly to call it this — but you know, the gay establishment," Yiannopoulos said.

He dismissed claims that such counseling could be harmful.

"For those people to suggest that reparative therapy is somehow damaging to people’s self-esteem, is so laughably preposterous, I don’t take it seriously," he said.

"My aspiration is to rebrand, revitalize, rehabilitate what they call ‘conversion therapy’ for two new generations in the same way that I obliterated feminism for two generations, because it’s dying, and horribly maligned, ridiculed and prosecuted industry. It’s an industry in crisis, but it’s an industry whose addressable market has never been larger,” he said.

Yiannopoulos said he "was never wholly at home in the gay lifestyle — Who is? Who could be? — and only leaned heavily into it in public because it drove liberals crazy to see a handsome, charismatic, intelligent gay man riotously celebrating conservative principles."