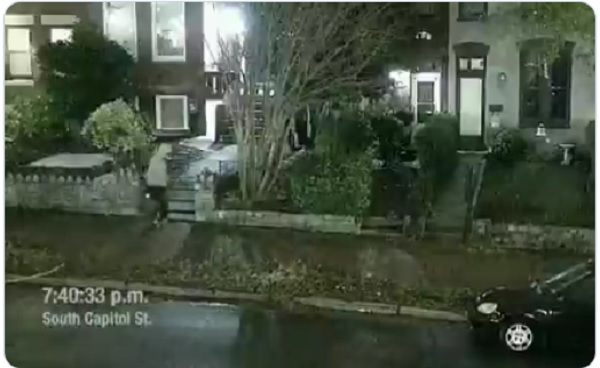 The FBI released new footage Tuesday of a suspect connected to two pipe bombs left at the headquarters for the Republican and Democratic parties before the Capitol riot on Jan. 6.

The video appears to show the suspect walking on a sidewalk with a backpack to the areas where the bombs were later discovered. The footage occurred between 7:30 to 8:30 p.m. on Jan. 5, which FBI officials have said is when they believe the bombs were planted.

The suspect wore a gray hoodie and black and gray Nike Air Max Speed Turf shoes with a yellow logo, and had on a face mask, the FBI said. It added that it was hoping the new footage would lead someone to recognize the person’s “gait, body language, or mannerisms” to identify them.

The suspect is first shown walking on South Capitol Street, where he sets down a bag and stands as somebody passes by while walking their dog.

Two pipe bombs were placed near the DNC and RNC between 7:30 and 8:30 on the evening of Jan. 5th. The devices found were viable devices. pic.twitter.com/mimYfgymGb

Approximately 12 minutes later, the suspect is shown sitting down on a bench outside the Democratic National Committee headquarters, placing a bag down in front of it. The person in the video hunches over the bag before getting up and walking away.

Two additional clips show the suspect in an alley near the Republican National Committee headquarters and walking North past the Capitol Hill Club at 8:14 p.m.

We are asking the public to come forward with any information that could assist us, you may know someone who was making plans to travel to the Capitol Hill area of DC or researching these locations. pic.twitter.com/xJVaMlLR1U

The #FBI is asking for the public’s help to identify the individual responsible for placing these pipe bombs to ensure they will not harm themselves or anyone else. pic.twitter.com/PRGD8TpLai

“The American people have provided invaluable assistance in this investigation, and the FBI and our law enforcement partners are very grateful for that cooperation,” said Steven D’Antuono, the assistant director in charge of the FBI’s Washington field office. “We still believe that there is someone out there who has information they may not have realized was significant until now.”

“We know it can be a difficult decision to report information about family or friends — but this is about protecting human life,” D’Antuono said.

Authorities discovered the pipe bombs on Jan. 6, approximately 90 minutes before a mob broke away from a rally in support of President Donald Trump to storm the Capitol building as lawmakers were certifying President Joe Biden’s election victory.