In a recent article, I noted that my boomer generation was the last to experience normalcy in our childhood years – in the sense that normalcy equates to things operating according to their nature as opposed to being artificially manipulated. At the start of our generation, in 1946, we had intact natural families, protected by the institution of marriage, bolstered by the active culture-wide discouragement of promiscuity and adultery. Boys were boys and girls were girls, and we celebrated that existential delight with the French exclamation "viva la difference!" We cherished babies as a gift from God and respected Him as a matter of cultural consensus. Our churches were full, and our jails were empty.

Science was grounded in provable facts and reproducible processes consistent with God's natural order. At the community level we had vibrant natural economies integrating family farms, diverse small businesses and local industries. We primarily ate natural foods, saw health and healing as a natural process, and enjoyed the natural society of mutual cooperation for the common good.

We saw competition in sports and business as beneficial because we also had a code of ethics that demanded fairness and rewarded merit. Journalism was an honorable profession that we trusted to be our eyes and ears for monitoring current events. To a far greater extent than today we the people had control over our lives and our government.

By the final year of the boomer babies, 1964, all that had changed, and for reasons most don't realize and won't discuss today for fear of "Woke" backlash.

The chief culprits were German communist immigrants who had fled Hitler's rising "fascist" National Socialism by the tens of thousands in the 1920s and '30s. Through the war years (in cooperation with homegrown Marxists), they gained ideological control of Hollywood, much of the news media, the Democratic Party and many other culture-shaping institutions because they served America's anti-Nazi interests. Post-war, they shifted their focus to overthrowing our Judeo-Christian culture. The "Red Scare" of the 1950s was an authentic and serious crisis now revised/erased from the history books by the Marxist winners.

Germany had been the chief exporter of Marxism since its native son Karl Marx launched it in the mid-1800s. Germany was the birthplace of "higher criticism" in Christian theology, which created the modern "religious left," and exported its Bible-diluting heresies to America, corrupting nearly every mainstream seminary. Germany was the homeland of the highly manipulable and manipulative "soft sciences" like Freud's psychology.

Germany (along with London and New York) was a world capital of eugenics long before Hitler. And it was the birthplace of "Cultural Marxism" at the Frankfurt School, whose founder Herbert Marcuse was the evil genius behind the rise in America of the left's ultimate weapon, the "sexual revolution," and its LGBT activist armies. Marcuse began his American take-down campaign as an employee of the OSS (forerunner to the CIA), and then a high luminary of academia who sowed the seeds of the 1960s cultural revolution in one after another of the elite universities.

As I document in my book "The Pink Swastika," Germany was also the birthplace of the LGBT movement under Karl Henrich Ulrichs in the 1860s, which in turn gave birth in the early 1900s to what would later be called Nazism. The homosexual subculture in Germany was so pervasive and so powerful by the Weimar era of the 1920s that sodomy was known worldwide as "the German vice," and extreme and varied sexual perversions virtually defined German culture in the major cities. Opposing camps of LGBTs literally dominated both the Nazi Party and the Communist Party as they vied viciously for total power.

America's first LGBT organization (in 1924) was a Chicago chapter of the German "Society for Human Rights" (whose most famous member was Ernst Roehm, founder of the Nazi "storm troopers"). That Chicago offshoot was launched by German American soldier Henry Gerber upon returning from post-WWI service in Germany. And the so-called "father" of the American "gay rights" movement, Marxist Harry Hay, was seduced into homosexuality as a pubescent teen by a grown-up former boy-toy of one of Gerber's co-founders. Hay's network of "gay" Marxist cell groups, and "in the closet" allies such as Alfred Kinsey, literally spearheaded the "sexual revolution" as a weapon against the cultural primacy of marriage-based heterosexual normalcy in America – the literal fulfillment of Marcuse's plan.

How did Germany become such a center of evil in the world? I contend in my book "Dynasty of Darkness" that it was related to the excavation and acquisition by Germany of the Pergamum Altar, identified in Revelation 2 as the "Seat of Satan … where Satan dwells." I have chronicled how Kaiser (Caesar) Wilhelm II, the final emperor of Second Reich, considered his reconstruction of the Pergamum Altar in Berlin as his highest achievement, and how the process precisely tracks Germany's descent into great evil, including Fredrich Nietzsche's infamous declaration that "God is dead," escalating through the German instigation of both World Wars, and the rise of the demonic European Union (the model for the one-world government of the Antichrist) upon the reunification of Berlin (after the collapse of the Soviet "Evil Empire," which possessed the altar as a property in East Berlin from 1961 to 1990). 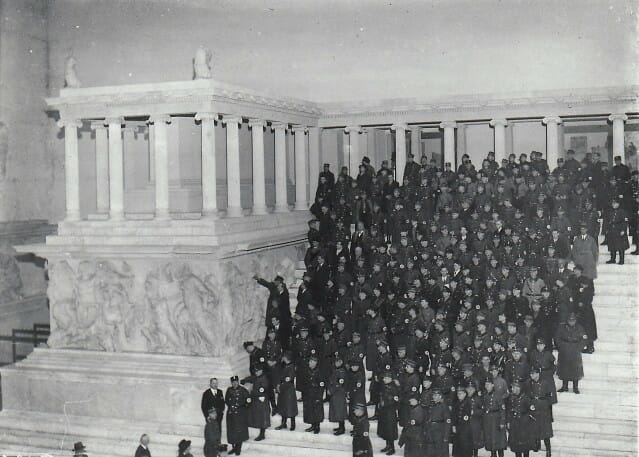 Nazis on the Pergamum Altar.

I also show how the United States' possession of it from 1945 to 1961 (as the dominant Allied power occupying Germany) tracks precisely with the two landmark SCOTUS rulings that officially shifted America off its biblical foundation onto the quicksand of Secular Humanism, and empowered militant atheists to purge Christianity from public life. During that same short window we also established the United Nations' global headquarters in Manhattan on land donated by the Rockefellers.

I wrote this column to convey three truths. First, that our national collapse into depravity and delusion is entirely orchestrated by wicked men whose actions can be tracked historically if one dares to do so. Second, that what we are experiencing today is literally the rise of the last-days Antichrist Kingdom, meaning our duty of evangelism has never been more urgent. And third, that America's "normalcy" before the 1960s was a reflection of our collective conformity to "the Laws of Nature and Nature's God." That witness of the natural world is our bridge to evangelize the lost post-boomer generations (and many of our own peers) who have been thoroughly conditioned to reject and even mock traditional evangelistic methods.

Free access to "The Pink Swastika," "Dynasty of Darkness" and/or Dr. Lively's "natural life" evangelism tool is available upon request to [email protected]

Scott Lively
Scott Lively is an attorney, pastor, human rights consultant and missionary with service in more than 50 countries. He is the author of eight books including "Redeeming the Rainbow," a textbook on pro-family advocacy and opposition the the LGBT agenda, and his most recent work "The Prodigal Son Prophecy: God's Amazing Plan for the Restoration of the Two Hebrew Houses and the Salvation of the Gentiles." All of Scott's books are offered freely in PDF and/or video form at his website https://www.scottlively.net/subscribe/. He can also be reach by email at [email protected]
Porn for priests
Pope Benedict and his recently revealed Antichrist letter
Christian Zionism? No, Christian Shilohism
The myth of the 'gay conservative'
Satan's Rainbow Synagogue
See more...