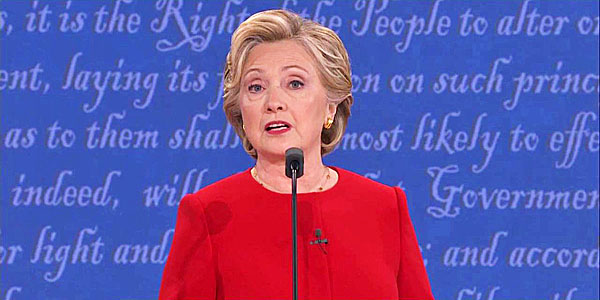 The lawyer who represented Hillary Clinton's failed 2016 presidential campaign and was responsible for hiring the firm that produced the infamous "Steele dossier" has been sanctioned by a federal appeals court in an election dispute.

Marc Elias was named in the order, noted Hans von Spakovsky, a senior fellow at the Heritage Foundation and an expert on election integrity.

The court found the lawyers' motion was "redundant and misleading," von Spakovsky said.

"Critically, appellees likewise failed to notify the court that their previous and nearly identical motion was denied. This inexplicable failure to disclose the earlier denial of their motion violated their duty of candor to the court. Moreover, to the extent that their motion, without directly saying so, sought reconsideration of their already denied motion, the motion was filed beyond the fourteen-day window for filing motions for reconsideration set forth in [federal rules]."

The lawyers' explained "they construed the original denial of their motion to supplement the record as an order that applied only to the emergency stay proceedings."

In fact, when a request for sanctions was submitted based on the duplicative filing, they didn't even withdraw the motion. Instead, they stood by it so that the proceedings were "multiplied … unreasonably and vexatiously," the court said.

The lawyers are being required to pay reasonable attorney's fees and court costs incurred by the appellant and "double costs."

Von Spakovsky cited a Washington Post report in 2017 that noted Elias' "involvement in the financing and internal dissemination of the Trump research underscores the influence he wields behind the scenes in Democratic politics."

"Last year, he was the driving force behind the huge, unprecedented number of lawsuits filed prior to the election attempting to change state laws to implement widespread absentee balloting, allow vote trafficking (harvesting), and void or weaken state voter-ID and voter- and witness-signature requirements," he explained.

"In 2020, Elias and his colleagues at Perkins Coie— Bruce Van Spiva, Skyler Howton, Stephanie Command, Daniel Osher, and Lalitha Madduri (all of whom were included in the sanctions order)—filed a lawsuit against Texas," von Spakovsky wrote. "They represented the Texas Alliance for Retired Americans, along with the Democratic Senatorial Campaign Committee, the Democratic Congressional Campaign Committee, and Sylvia Bruni, the chairwoman of the Webb County Democratic Party."

The lawsuit was over a decision by the Texas legislature to eliminate straight-ticket voting, a change Democratic lawyers claimed was unconstitutional.

Von Spakovsky contended the claims are "absurd" but are "reminiscent of similar claims that Elias and his team at Perkins Coie made on behalf of their clients in many other lawsuits that were filed in 2020 challenging state election laws."

The campaign to change Texas' voting laws failed when the 5th Circuit got involved and said such changes, only days before an election, weren't allowed.

"The March 11 order directs the individual lawyers (not Perkins Coie as a firm) to pay the attorneys’ fees and costs incurred by Texas in having to respond to their 'vexatious' motion, as well as 'double costs,'" von Spakovsky said.

The court also "encouraged" the lawyers to review rules for "professional conduct."