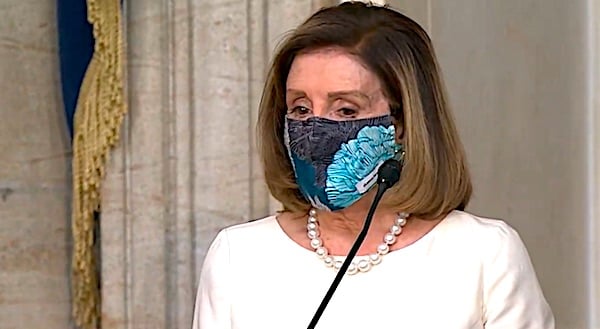 House Speaker Nancy Pelosi at the inauguration of President Joe Biden at the U.S. Capitol on Jan. 20, 2021. (Video screenshot)

The House voted 220-210 along party lines to adopt HR 1, described by the Daily Signal as "a bill to nationalize election procedures that states now control."

The issued erupted during the 2020 election when President Trump contested the outcome in six states, charging state officials did not follow their laws. In Pennsylvania, for example, the secretary of state ignored a state law setting Election Day as the deadline for receiving ballots by mail.

HR 1 would give felons the right to vote and expand Election Day registration. It also would force taxpayers to fork over $6 to political candidates for every $1 the candidate raises.

Mail-in voting, which is highly susceptible to fraud, would be expanded. And the bill allows third parties, including political activists, to collect and deliver ballots.

It also would ban witness signature requirements for mail-in ballots and force states to expand the voting period. And it would insert partisan politics into the bipartisan Federal Election Commission.

House Speaker Nancy Pelosi, D-Calif., said the passage of the bill "reminds me of what it might have felt like at Valley Forge."

"Throughout its nearly 800 pages of complex and convoluted text, H.R. 1 imposes unworkable and invasive regulations on the ability of individual Americans and groups of citizens to discuss vital policy issues with elected officials or the public and to exercise constitutionally protected freedoms," he said.

"The bill intrudes upon the private financial decisions made by everyday citizens, subjecting them to harassment and intimidation simply for giving to causes they care about," said Pruitt. "Despite being called the ‘For the People Act,’ it is anything but that, as the U.S. Supreme Court has made clear that ‘the people lose when the government is the one deciding which ideas should prevail.’ We hope the Senate will see through this façade and reject this misleading and deeply flawed bill."

Democrats have campaigned on the claim that Republicans want to suppress the vote, particularly among minorities.  Republicans argue voting requirements ensure illegal votes are not counted.

The bill faces long odds in the Senate because at least 10 Republicans would be required to join with the Democrats to achieve the required supermajority of 60 votes.

Some Democratic leaders want to eliminate the filibuster rule and hold a simple-majority vote. But several moderate Democrats from Republican-leaning states say that's not an option.

Bob Unruh
Bob Unruh joined WND in 2006 after nearly three decades with the Associated Press, as well as several Upper Midwest newspapers, where he covered everything from legislative battles and sports to tornadoes and homicidal survivalists. He is also a photographer whose scenic work has been used commercially.
ZERO Republican professors across 33 departments at 7 universities
'Big Bang' by Elon Musk said to be under way
Biden sending tax cash to activists supporting prostitution
Poll: Majority of Americans no longer trust elections to be 'fair'
U.S. plunges into 'intolerance' for those not promoting LGBT ideology
See more...