One day last week, my wife, the rare college professor who is also a Tucker Carlson fan, turned to me and said, "You know who I think should run for Roy Blunt's Senate seat?"

"No, who?" said I, not expecting any surprises. 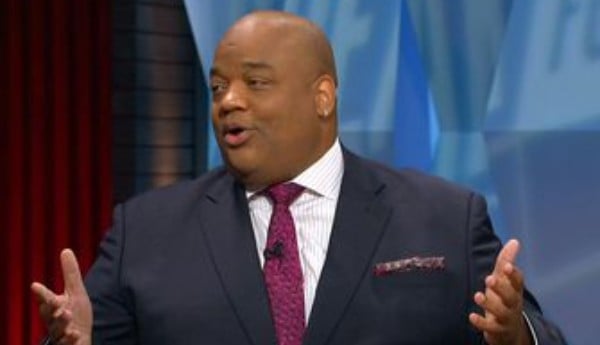 My wife knew of Whitlock from watching Carlson on whose show the veteran sportswriter has been a frequent guest. But she also used to see him working out – or at least hanging out – at the University of Missouri-Kansas City gym.

For a dozen or so years, back when people used to read the Kansas City Star, Whitlock, now 53, was the newspaper's premier sports writer. In 2006, he left for the greener pastures of ESPN.

I had met Jason in the mid-1990s when I was co-hosting a left-right political talk show on Rush Limbaugh's old station in Kansas City.

Whitlock was a regular on a sports show at one of our sister stations. If I caught him chowing down in our shared break room – a former offensive lineman at Ball State, Jason was still eating to keep weight – I would try to lure him into our studio.

Back then, Whitlock was a pure contrarian. If he was on the show, no feathers went unruffled. Over time, like many adults, Jason has moved slowly but smartly to the right.

What has made his move noteworthy is the hostile broadcast environment in which he has made it. As an African American, Whitlock has a little more room to maneuver than, say, a Curt Schilling, but not much.

When you write articles, as Whitlock did in January, comparing the BLM to the KKK you quickly use up whatever leeway woke white executives might have ceded you.

"BLM is a cleverly marketed slogan that provides cover for extremists to undermine racial progress and bully American citizens to support Democrat politicians," wrote Whitlock in the way of explanation.

"It's not a coincidence that BLM riots pick up during an election cycle and disappear after the votes have been counted." Exactly.

The day after my wife's epiphany, I just happened to have lunch with one of the state's most influential Republican lobbyists. I ran the idea past him. He loved it.

My friend also assured me that a candidate does not have to be a current resident of the state – Hillary Clinton in New York, for instance. When last heard from, Whitlock was living in Nashville.

A week later, I spoke to a group of Republican activists. When I ran the idea of a Whitlock candidacy past them, they loved it. One compared Whitlock to Trump – outspoken and fearless.

Whatever his virtues, Blunt was neither. When he announced he would not run again in 2022, just about every able-bodied Republican in the state eyed his seat.

The best-known of the candidates is the only Republican who could conceivably lose in 2022, former Gov. Eric Greitens. As the Missouri Times fairly noted, Greitens "stepped down in 2008 amid multiple investigations into sexual misconduct and campaign finance allegations." But otherwise …

All of them are worthy, but none of them stands out. Given this field, the nominee is much more likely to adopt the style of Blunt than of Missouri's fiery junior senator, Josh Hawley.

Whitlock would stand out in any field. In the way of firsts, Jason would probably be the first 300-pounder in the recent history of the Senate. If he enters the race, smart money has him winning in a walk.

Like Trump, Jason is a little rough around the edges. He will have that seriously incorrect (but very funny) Jeremy Lin tweet to deal with and some other sundry baggage as well, but Republicans are hungry for a fighter. And that Whitlock most surely is.

Having gone head-to-head with LeBron James and the Chinese Communist Party, Whitlock would have no fear of Chuck Schumer, let alone the editorial writers at the New York Times.