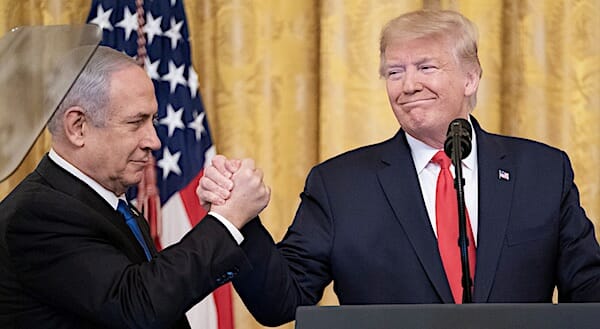 A federal judge has dismissed a lawsuit by Palestinian activists against President Trump and Israel, describing the complaint as "virtually unintelligible," with plaintiffs failing to specify who hurt them, when and where.

"The truly bizarre complaint alleged a massive conspiracy between the Israeli government and the named defendants to commit war crimes against Palestinians, without offering – or even identifying – any evidence to back up the baseless claim," said the American Center for Law and Justice, the ACLJ.

The ACLJ said some of the Palestinian activists were tied to terrorism. Other targets were Israeli Prime Minister Benjamin Netanyahu and prominent pro-Israel politicians.

The ACLJ defended former Democratic New York state Assemblyman Dov Hikind in the case, who appeared to have been targeted because he opposes the anti-Israel Boycott, Divestment, and Sanctions Movement, which has been condemned by both Republicans and Democrats.

The complaint, the legal group said, was "bereft of any relevant facts or coherent legal theories. For examples, the plaintiffs’ claims against former Assemblyman Hikind were in essence that he is an 'Israeli spokesperson' and an unregistered 'Israeli agent.'"

"Dozens of other pages of factual recitation appear entirely unrelated to any alleged harm at all. ... Critically, despite this lengthy exposition, the plaintiffs fail to specify who injured them, how the defendants are connected to those individuals, when the harm occurred, or where it occurred."

The ACLJ said it's not the first time that such claims have been made in federal court "by people desperate to somehow find fault with the State of Israel and her supporters."

"For years, the ACLJ has also represented clients in two similar cases that were also both filed in the U.S. District Court for D.C. All three lawsuits are nothing more than an attempt to implement BDS-via-lawsuit: to scare pro-Israel individuals and entities (or even just neutral businesses desiring to conduct business in Israel) from supporting Israel in any way by imposing the threat of litigation, along with its risks and expenses. To say that they are frivolous is being too kind. We call it lawfare."