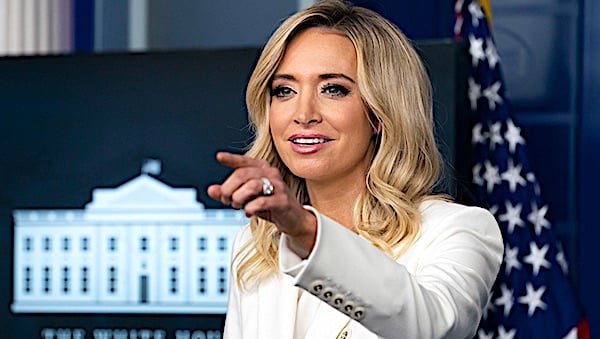 “As you’ll recall Stuart, the basement strategy is what he employed on the campaign trail. He went something like 50 days and he only took questions twice and when he did they were hand-picked questions,” McEnany said.

The former White House press secretary said she thinks the president’s “staff does not have faith that he could stand at the podium and have a press conference the way President [Donald] Trump did many times.”

McEnany referred to a virtual retreat for House Democrats Thursday where Biden asked if anyone had any questions just before a live video feed cut off, according to The Washington Post.

The event was for House members and not a press conference and Biden did answer two questions after the video ended, The Post reported. But many conservatives, including the Republican National Committee, criticized the White House for cutting the feed right after Biden said he would take questions.

“As you saw President Biden say right there, he said ‘I’m happy to take questions if that’s what I’m supposed to do.’ I’ve seen him joust back and forth in one interaction with Peter Doocy and he seemed to kind of relish the moment a little,” McEnany said.

“So I don’t think this is President Biden saying I don’t want to do this, I think it’s those around him recognizing when he does speak it doesn’t always turn out so well, like calling Republicans Neanderthals as he did recently in the Oval Office,” McEnany said.

Biden hasn’t held a solo press conference since taking office 45 days ago, which is a longer gap than at least the four previous presidents. White House Press Secretary Jen Psaki said Friday that Biden will have a press conference by the end of March.

“The pressure is mounting when you have even left-wing outlets calling him out for this, but I would say it’s extraordinary that he hasn’t taken questions, certainly 100 year record for not taking questions in a solo press conference from a sitting precedent, president,” McEnany said.