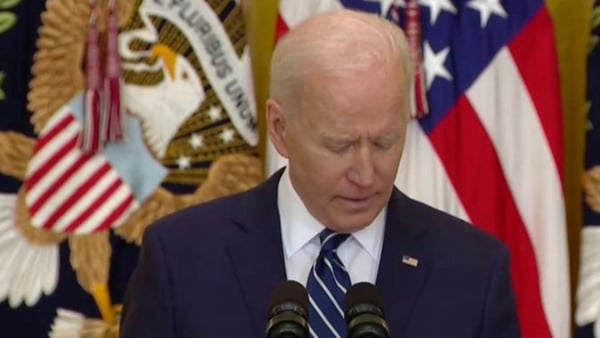 Political pundits were paying attention to 78-year-old Joe Biden's performance during his first solo news conference Thursday as much as anything he said.

NBC News senior analyst Jonathan Allen weighed in via Twitter, remarking that Biden was "sounding and looking tired partway through."

At one point, responding to a question about the filibuster, Biden launched into a train of thought that ran into a dead end.

"I'm going to say something outrageous. I have never been particularly poor at calculating how to get things done in the U.S. Senate," he said. "So, the best way to get something done if you, if you hold near and dear to you that you, uh, um, like to be able to, anyway. ... "

In a follow-up regarding his intention to run for reelection, Biden suggested the Republican Party might not exist in four years.

"Do you believe you will be running against former President Trump?" he was asked.

"Oh come on," Biden replied. "I don't even think about, I have no idea.

"I have no idea whether there will be a Republican Party. Do you?"

Another line that had some pundits scratching their heads came when he criticized Republican proposals across the nation to ensure election integrity as racist.

And he trailed off when asked to name an important policy issue.

Biden even took the opportunity to poke fun at this age, recalling that he arrived in the U.S. Senate 120 years ago.

Veteran pollster Frank Luntz told the Washington Examiner that each side will have a different takeaway from Thursday's news conference.

"So there was something for everyone in today’s press conference."