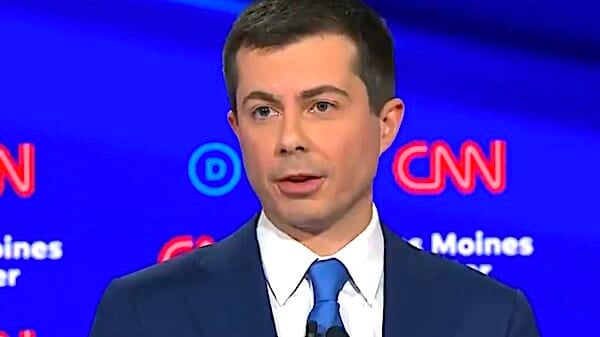 During the same meeting, the former president also joked about Buttigieg, citing his age, sexuality, and height, as reasons why he could not win the 2020 presidential election.

At the time, former candidates Joe Biden, Bernie Sanders, Buttigieg, and Warren had emerged as the presidential front runners.

“He’s thirty- eight,” Obama said of Buttigieg, according to the Hill, “but he looks thirty.”

Obama also said that Buttigieg was “mayor of a small town,” adding that “he’s gay” and “he’s short.”

The Hill’s excerpt is below.

Two days later, and eight and a half miles away from Sanders’s Queensbridge Park rally, Barack Obama glided across the wood- planked floor of Yves, a trendy brasserie with low ceilings and French midcentury décor in the Tribeca section of New York. When the former president entered the candlelit eatery, known for its veal schnitzel, king salmon, and Burrata cremosa, he was at ease, tieless in a white dress shirt and black suit. He held a glass of vodka in hand as he greeted old friends.

Normally, Obama hated the glad- handing work of meeting donors, even on behalf of his foundation. But this Monday night con-fab with Black corporate power brokers huddled in the boutique eatery across from the Greenwich Hotel was a little bit different. Obama had a covert political mission to accomplish, a reminder that he could still play the old game he couldn’t engage in publicly.

Flashing his familiar 135- million vote smile, he saw what amounted to a Black all- star team of the corporate world: Ken Chenault, the former chairman of American Express, tech executive Charles Phillips, Merck CEO Kenneth Frazier, and Citigroup’s Ray McGuire, among others. By the time Obama circulated through the cozy confines of Yves, from which the tables and chairs had been removed to make more space, an Irishman of sorts had snuck in to join the group of Black luminaries. The actor Robert De Niro, who owned the Greenwich Hotel, where Obama had spent the day, wandered in late, after the prospective donors, and sat on one of the long permanent benches in the middle of the eatery.

Usually, Obama eschewed making substantive remarks at informal shindigs like this. A touch on the shoulder here, his classic “How are you?” there, a pat on the back, and out the door. But these were guys who liked him and guys he genuinely liked— a group with whom he intended to leave an important if subtle message about the election. Obama made his way back toward the door and delivered an announcement to the crowd of forty or so people.
“I’m gonna take a few questions,” he said.

The session began with a fastball, a pitch down the middle for the issue Obama wanted to address. “If Joe Biden, Elizabeth War-ren, Pete Buttigieg, and Kamala Harris asked for advice, what would you tell them?” a prominent executive queried.

“They all did!” he popped back, eliciting laughter from the crowd.

Obama paused for a moment, collecting himself before shocking the audience with the singular message that he had wanted to deliver. He embraced the prospect of a Warren presidency. After nearly eleven months of campaigning, the race looked like it had stabilized with four truly competitive candidates: Joe, Bernie, Elizabeth, and Pete. Each had a claim to the advantage; no one was a prohibitive favorite. Until the past week or two, though, Warren had been rising steadily. The biggest obstacle to her success, it seemed, was convincing the establishment that she was truly different from Bernie, enough of a mainstream politician to be trusted with the reins of government. Now Obama was making that case for her.

Ignoring the other candidates, he launched a lawyerly argument, methodically ticking off the objections to Warren he knew existed in the minds of his corporate and financial friends. He knew Elizabeth, he said, very well. They had intersected during his time at Harvard, and then again during his time in the Senate where she often testified as an expert witness. He’d also “hired” her to stand up the Consumer Financial Protection Bureau. And while he didn’t appreciate the smattering of attacks she’d made during his presidency, he said he was sure that she was a tough- as nails campaigner who could get things done in Washington, should she succeed him as the next
Democratic president.

After establishing himself as an authority on Warren, Obama underscored that she had cleared his threshold for viability not only as a candidate but as president. Standing before the crowd, he said he had encouraged all the candidates to ask themselves a three- question litmus test. “Why you?” Obama said. “Why now?” and “Is your family behind you?” He expressed confidence in Warren, saying she had considered each question and had a satisfactory answer to all three. “Many candidates like the idea of being president,” he told the crowd. “But few really have a ‘why,’ ” or a rationale for running.

Obama paused again, before making his final appeal, squarely addressing the elephant in the room, in a tone that was half- ribbing and half- reprimanding. “So what if she raises your taxes a little bit? Compare that to what we have now.” This was definitely not a time to sit on the sidelines, Obama said with some urgency. If Warren won
the nomination, he said he would support her and stressed that he wanted Wall Street and corporate types to do the same. “Everyone in this room needs to pull their weight,” he said. Republicans, he continued, are winning cycle after cycle, up and down the ballot, because their donors care more than the Demo-crats’ donors.

Like so many other Democrats, he saw Warren, who had taken the lead in Iowa from Biden in late September, barreling toward the nomination. It was time to start swinging folks in his coalition be- hind her. The persuasion effort among Black men would be as difficult as it was crucial. Hillary’s loss could be attributed in part to insufficient support among Black men in major cities, and she had never had the support of elite Black men that she had among Black women. Things would have to be different for Warren. She would need the votes of Black men on the ground and the money of Black men in boardrooms— especially because she had forsworn buck-raking with wealthy donors. “Now, this is not an endorsement!” he said with a grin. His audience got the joke and laughed with him. He’d just given his seal of approval to Warren without using the “e” word.

“It was a ninety percent Warren sermon,” said one donor in the room. When he was asked to return to the original question on his advice, Obama said he liked Buttigieg, a rising talent who’d worked on his own campaign. But despite his affinity for the South Bend mayor, he rattled off a list of reasons why Buttigieg couldn’t win.

“He’s thirty- eight,” Obama said, pausing for dramatic effect, “but he looks thirty.” The audience laughed. Obama was on a roll, using the tone of light ridicule he some-times pointed at himself— “ big ears” and “a funny name,” he’d said so many times before. Now, it was directed at Buttigieg. “He’s the mayor of a small town,” the former president continued. “He’s gay,” Obama said, “and he’s short.” More laughter.

Only months earlier, Buttigieg had sat in Obama’s postpresidential office in Washington seeking counsel on how to maintain equanimity in the face of homophobia on the campaign trail. Now, behind his back, Obama was riffing on him to some of the wealthiest Black men in America at a time when Buttigieg had been dubbed “Mayo Pete” by critics who believed he couldn’t connect with African American voters.

Obama kept going, acknowledging that he knew Kamala Harris but offering no further commentary. But when he wrapped up, he had left someone out. “You forgot Biden,” one executive said, reminding him of his two- term vice president.

Obama seemed apprehensive, according to a source in the room. “His support for Biden was tepid at best,” the person said. At that point, it didn’t matter what he said about Biden. His silence spoke for him.

The former president’s press office did not immediately respond to a request for comment from the Daily Caller News Foundation.