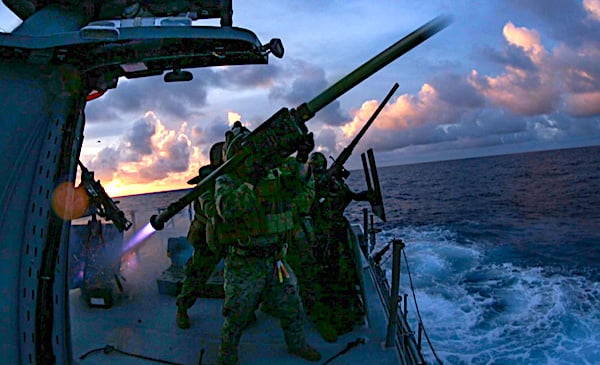 Warning of a sudden new threat of "extremism" from the right, the Pentagon is indoctrinating military service members in a program "packed with progressive ideology and misstatements about the Constitution," according to former Department of Justice lawyer J. Christian Adams.

In a column published by PJ Media, he said the Navy, for example, in a talk titled "Extremism Stand Down," presents "misstatements of the law and warped characterizations of fellow citizens who believe in constitutional principles" as fact.

Adams said he obtained copies of all the materials.

"Throughout the services, service members have been shocked at the Biden blitz to root out ideas and people who stand in the way of the administration's transformative agenda," he wrote.

Adams said one individual in the training told him, "The military is one of the last institutions left that hasn't been radicalized by the progressives. That's why it is being targeted now."

Adams said his review of the materials "makes it clear the armed forces are to be integrated into the Biden administration's racialist agenda."

The Navy contends, he said, that if "extremist behavior" is not eliminated from the ranks,  "then racism, injustice, indignity and disrespect will grow and keep us from reaching our potential."

But the materials "do not cite a single instance of racism, injustice, indignity, or disrespect."

He explained the "scripted training" tells officers what to say to the ranks.

"The 'Dos and Don'ts of Facilitation' ensure that dissent will not be welcomed," he noted. "'Do be alert to statements about Prohibited Behavior (Extremism in the Ranks) which [sic] rely on inaccurate or misleading assumptions, misperception or myth. ... Do Not allow only a few participants to domination the conversation.'"

Adams cited demands that no one be allowed to "stray off topics."

"What might that myth or prohibited behavior be? The Pentagon provides helpful talking points for officers forced to do the training. 'Anti-government extremists' are the focus, as proven by 'recent events,'" he said.

"In other words, Trump supporters. Political foes of the administration."

Service members have a "duty to reject" such ideas, according to the documents.

"And if you don’t, 'the full range of administrative and disciplinary actions' await, including being discharged," he said.

The material states: "Speech that incites violence or criminal activity that threatens to undermine our government and Constitution is not protected by the First Amendment."

"Actually, it is," Adams insisted. "Secretary of Defense Austin is flat wrong. Speech cannot incite criminal activity. The closest one can get to this idea is a criminal conspiracy. But even a conspiracy requires an act and speech standing alone cannot be criminal."

He said the Pentagon's characterization of the law is borrowed from "the criminal codes of dictatorships."

"In fact, the First Amendment would allow a person to stand in the town square and over and over again give a speech undermining the government."

Interestingly, he pointed out, neither Chinese communists nor Antifa rioters are mentioned, "despite ongoing acts of violence."

Adams said the Pentagon is clear that it does not want people to exercise their rights.

"A whole section is devoted to banning behavior such as 'liking any material that promotes discrimination based on … gender identity.' In other words, if you believe in biological sex, you might be involuntarily separated or court-martialed. Never mind that Congress has never passed any such law," he said.