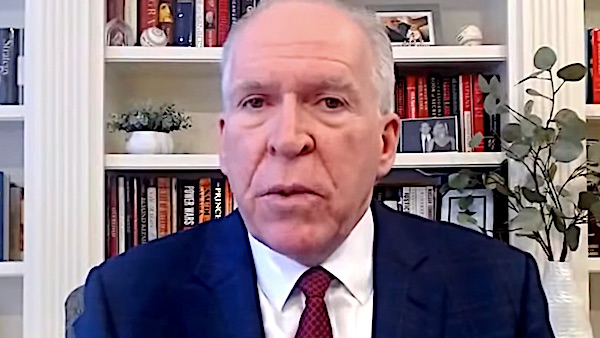 “Well I must say, to Claire’s point, I’m increasingly embarrassed to be a white male these days … in light of what I see of my other white males saying,” Brennan said in the segment.

“But it just shows that with very few exceptions, like [Sen.] Mitt Romney, [Sen.] Liz Cheney, [and Rep.] Adam Kinzinger, there are so few Republicans in Congress who value truth, honesty and integrity,” Brennan said.

“And so they’ll continue to gaslight the country the way that Donald Trump did,” Brennan said.

“And the fact that this has such security and safety implications for the American public and for the members of Congress, again, as Claire said, it is just a disgusting display of craven politics that really should have no place in the United States in 2021,” Brennan said.

Former President Donald Trump repeated false claims in his Sunday address to the Conservative Political Action Conference (CPAC), his first major public appearance since his presidency, that the election was “rigged” and he was the winner.

The House voted 232-197 on Jan. 13 to impeach the former president again, charging him with a single article of “incitement of insurrection” after a mob of Trump’s supporters broke into the Capitol building on Jan. 6. The Senate voted 57-43 in February to convict the former president, but failed to reach the necessary 67 votes to convict him.

The mob had broken into the Capitol building during a protest which turned into a deadly riot against the Electoral College’s certification of the presidential election results.

WND News Services
These reports are produced by another news agency, and the editors of WND believe you'll find it of interest.
Psaki warns Biden not done attacking gun rights: 'This is only the beginning'
BLM co-founder buys $1.4 million home in virtually all-white area
Caribbean volcano erupts, but 'only those vaccinated against COVID' allowed to evacuate
Northern Ireland violence worst in decades
Mark Meadows: 'Biden is either lying, never bought a gun at a gun show, or both'
See more...