Let's look closely at this chart: 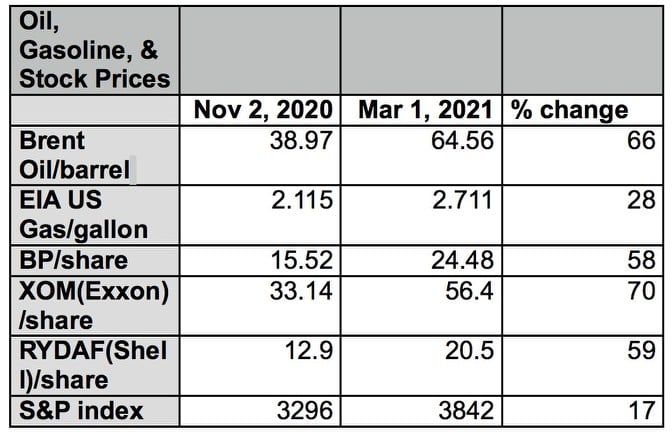 It is interesting that the price for gasoline increased only half as much as did oil. Gasoline prices lag oil prices until current inventories of gasoline are sold off. So we should expect gas prices to eventually increase about the same as oil prices, to be about two-thirds higher than the $2 per gallon when Trump was president. For average Americans, that would be about $3.40 per regular gallon of gas, depending on location, up from the $2.11 under Trump. If oil increases to $100 a barrel as some pundits predict, then gasoline could reach $5 – and oil oligarch net worths will increase 250%. That is a lot of incentive for oil oligarchs to try to influence U.S. elections.

1. The price of gasoline is inelastic. As the price changes, consumption changes far less. Therefore, total revenues from gas sales change about the same as the price changes without any changes to costs for production. Price increases are pure profit.

2. The values of oil reserves change as the price of oil changes. If TNK of Russia (partially owned by its president, Vladmir Putin) has 100 billion barrels of oil in reserve, then it just increased in value from $4 trillion to about $6.8 trillion, just because the price of oil increased. Putin's net worth increased 60% in four months.

How did oil prices increase so much? Because of what Democrats and especially Joe Biden did in the last couple of months. Biden oil policies are really pro-oil oligarchs and anti-average working Americans, those who consume oil products. While Democrats claim that their policies are meant to "save the planet" by discouraging oil consumption, they lie. Oil prices are inelastic. Therefore, increases to oil prices just act, in effect, as increased taxes on oil consumers and additional payments to oil oligarchs. And oil is used in much more than just gasoline.

How much are oil consumers taxed? According to Value Penguin (Average Household Budget – ValuePenguin) the average household spent about $3,000 for gasoline in 2020. If true, then that will increase to $5,000 by the end of 2021 at a 60% oil price increase. That will absorb any stimulus checks plus some more from the economy that could have been spent on other products. Is that why Democrats needed to give $1,400 even to working Americans?

Think about all the products that have oil imbedded in them. From plastic bags at the supermarket to wrapping paper to furniture to airplane fuel to automobile parts and more, they will all suffer from increased oil costs. Plastic = oil. How much plastic is consumed in the United States?

Joe Biden and the Democrats understand all of this. Their economists are smart. So why are Biden and Democrats helping oil oligarchs, which harms average working Americans, especially poorer Americans and black Americans and Hispanic Americans who spend a larger portion of their paychecks on oil products? Because Democrats probably owe a lot to those oligarchs. Oil companies. Russians. Saudis. Iran. Ukraine. Venezuela. PACs. Silent money. Even Putin – despite what Putin and Democrats claim.

While Democrats and Biden claim to help working Americans, their actions say something different. Two-bucks-a-gallon Donald Trump actually helped average working Americans by achieving oil independence for the first time since Eisenhower, which must have really ticked off all those oil oligarchs, like Rex Tillerson. Is there any doubt why oil oligarchs ganged up against Trump to help Democrats? Because of low oil prices, just as China helped Democrats because of the Trump tariffs.

What is the long-range outlook? The rich get richer, and working Americans get fleeced – fleeced from the actual gasoline price increases and from inflation where oil affects the end product. Just as when Obama was president, the wealth gap between rich and poor will increase as wages for average working Americans fail to keep up with inflation – just the opposite as the economy under Trump.

So what do we do? What do we do without a Trump-like protector to stop the fleecing of average working Americans by oligarchs (whether oil, pharma, media, big tech or Wall Street) and complicit politicians like Joe Biden?

Michael Master
Michael Master's latest book is "Trump the Disrupter." His previous books are "Save America Now!" and "Rules for Conservatives."
What a REAL J6 committee would investigate
Cassidy Hutchinson's 15 minutes … of fraud
Who leaked the document?
The Dems' despicable strategy to minimize midterm losses
Who is really putting democracy at risk?
See more...