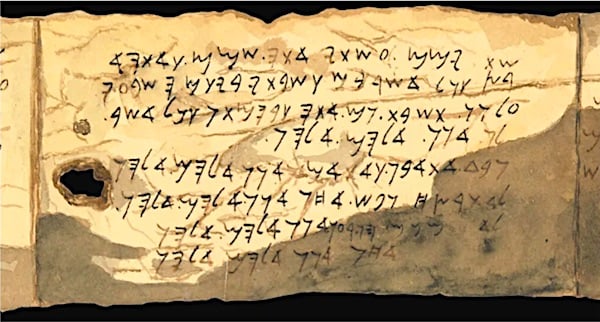 A copy of what some claim to be the oldest Bible in the world. (courtesy The British Library)

It's being called "the most controversial cold case mystery in the history of biblical scholarship" involving possibly "the most significant archaeological discovery of all time."

New research is shining fresh light on what may have been the oldest portion of the Bible ever found, perhaps Moses' own copy of Deuteronomy, a version that was initially dismissed as a forgery.

The case centers on 15 or 16 leather strips acquired in 1878 by Moses Wilhelm Shapira, a Jerusalem antiquities dealer and agent of the British Museum.

"The manuscript, written in ancient, Paleo-Hebrew contained what appeared to be a form of the Bible's Book of Deuteronomy but with significant variations," writes Ross K. Nichols, author of the new book "The Moses Scroll." 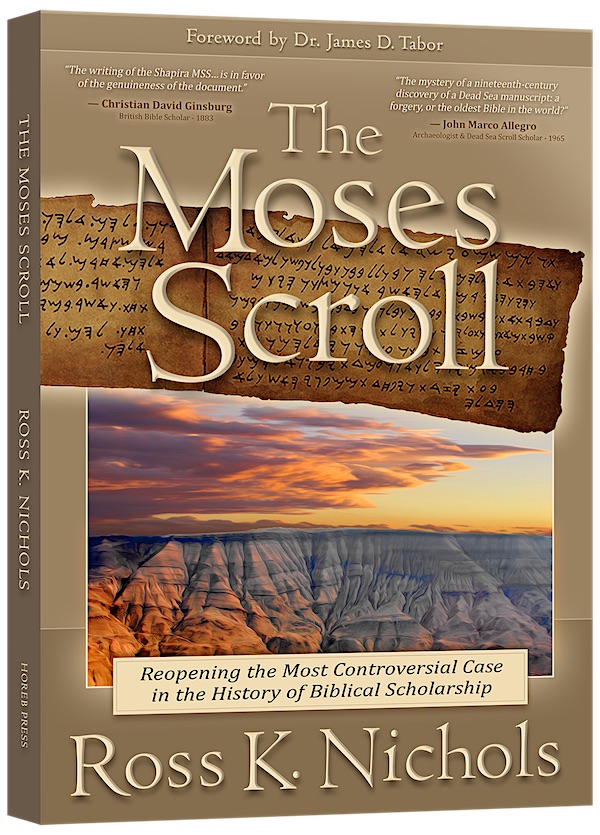 "It was allegedly discovered by bedouin tribesmen around 1865, east of the Dead Sea, in a remote cave, high above the Wadi Mujib (biblical Arnon). Shapira believed that his manuscript was both ancient and authentic. In 1883, he presented his scroll to the leading scholars of Europe. Newspapers around the world covered the unfolding story as scholars debated the genuineness of the leather strips. Ultimately the scroll was deemed a forgery and Shapira the forger."

Nichols, an ordained minister and teacher of the Hebrew faith in St. Francisville, Louisiana, says the case might have remained closed were it not for an astonishing find eight decades after the reported discovery of Shapira's scroll. 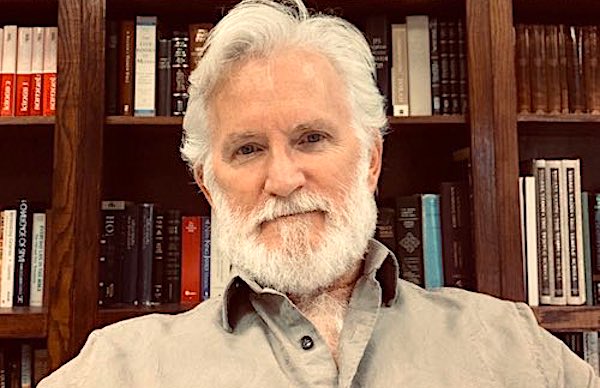 "That discovery was also made by bedouin, but in a cave west of the Dead Sea. Those scrolls proved to be unquestionably authentic and were more than 2,000 years old. The world now knows them as the Dead Sea Scrolls. We must now ask, 'Could the nineteenth-century scholars have been wrong about Shapira's scroll?'"

Dr. James Tabor, the former chair of Religious Studies at the University of North Carolina, calls Nichols' book "a sea change in Shapira studies. Not only does it reveal much that was previously unknown about the Shapira saga itself, but for the first time we have a critical edition, with translation and notes, so much as it can be recovered, of the 'Deuteronomy' fragments themselves."

Interestingly, another book on the exact same subject was published just two weeks apart from Nichols' work. In "The Valediction of Moses: A Proto-Biblical Book," Idan Dershowitz, the chair of Hebrew Bible and its exegesis at the University of Potsdam, Germany, makes the case that the fragments are indeed authentic and is a predecessor to Deuteronomy. 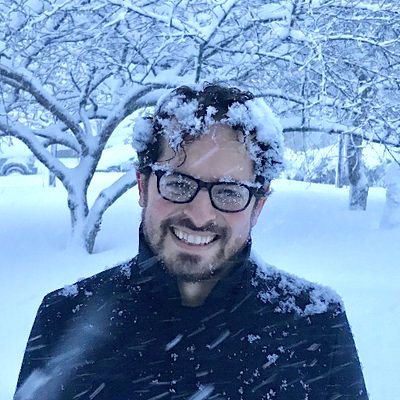 In a recent post on Twitter, Dershowitz, an Israeli-American scholar, noted differences between the Shapira fragments he refers to as "V" and the biblical text in Deuteronomy.

"There is something very strange about the structure of Deuteronomy," Dershowitz says.

"Deut 11:26 begins: 'Behold, I set before you today a blessing and a curse.' This continues for several verses, stipulating that the blessing and curse are to occur on Mt. Gerizim and Mt. Ebal. But then the narrative breaks off abruptly. What about the blessing and the curse that were going to be presented 'today'? We don't find out and instead have chapter after chapter of laws.

"From chap. 12 all the way through 26. Then, all of a sudden in chap. 27, we're back at Gerizim+Ebal, and we hear the rest of that narrative. To put it mildly, this is an odd literary structure, and it suggests that the laws might have been added secondarily. Amazingly, V's version of the Gerizim+Ebal episode is uninterrupted, and the Deuteronomic laws are nowhere to be found!"

A 2016 book titled "The Lost Book of Moses: The Hunt for the World's Oldest Bible" by Chanan Tigay, an award-winning journalist and professor of creative writing at San Francisco State University, may have kicked off the recent craze for the ancient fragments.

The Harvard Gazette reported Tigay's obsession with Shapira grew until he "ended up falling in love with the guy ... it was like I was dating this long-dead man, which was awkward, for my wife especially."

"I was writing a book that I wanted people to feel like they couldn't put down. I wanted it to feel like a mystery ... in the end to me, it seemed like a great caper."

The case has attracted the attention of the New York Times which featured a drawing of the ancient text on its front page on the day of the spring equinox this year, with the headline, "What if they were real?" 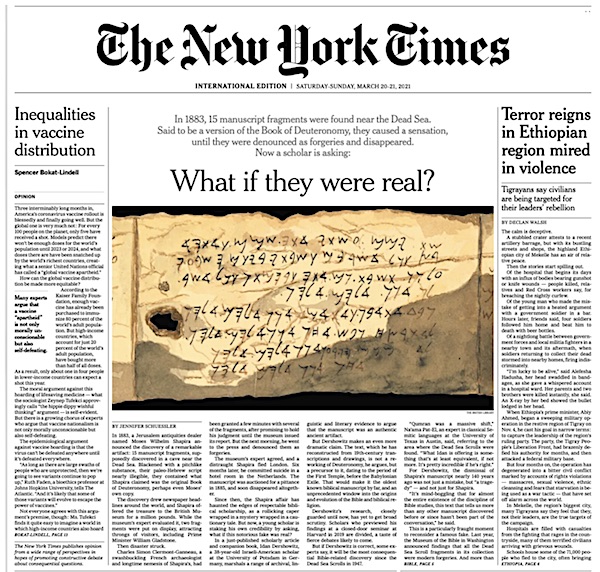 Britain's Daily Mail, Live Science and Fox News have also covered the issue in recent days, as other research papers on the intriguing subject have been published.

It was in 1861 that Shapira, a Russian-born Jewish convert to Christianity, opened his souvenir shop on Christian Street in the Old City of Jerusalem, selling everything from prayer books and postcards to palm fronds and Holy Land souvenirs, some of which were real and some not. 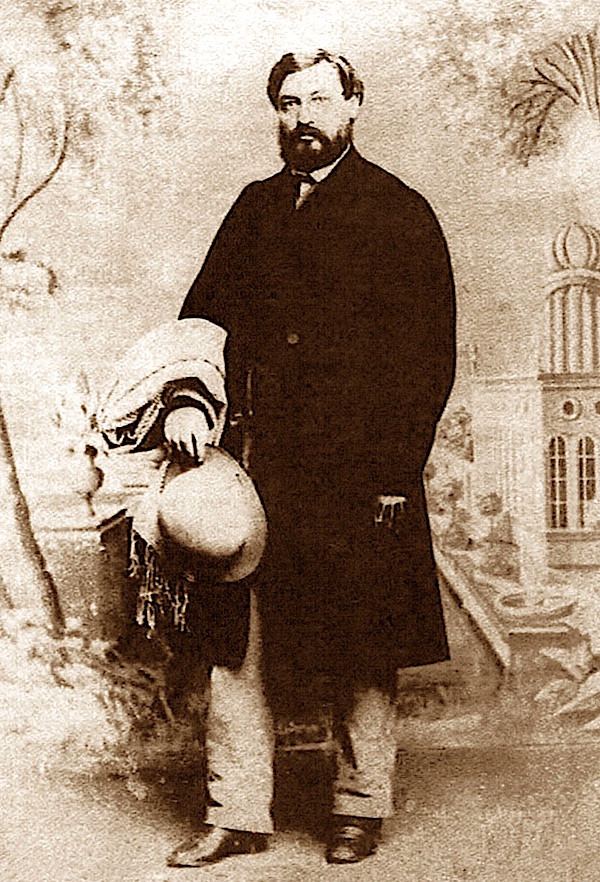 After acquiring the manuscript from Arab visitors, he brought it to Europe, where scholars in Germany dismissed the text as fraudulent. He then offered to sell the strips in 1883 to the British Museum for 1 million pounds. The museum considered the purchase and appointed Christian David Ginsburg to determine its authenticity. Ginsburg examined the fragments for nearly three weeks, but on Aug. 21, 1883, the famous French scholar Charles Clermont-Ganneau, the "nemesis" of Shapira, announced publicly the scroll was a forgery.

The very next day, Ginsburg wrote to the British Museum's director that the fragments were phony. The media picked up on the declaration, with the British satirical magazine Punch publishing a cartoon showing Ginsburg arresting Shapira, who was depicted stereotypically with an anti-Semitic hook nose and his name rendered as "Mr. Sharp-Eye-Ra," as forger's ink dripped from his finger. 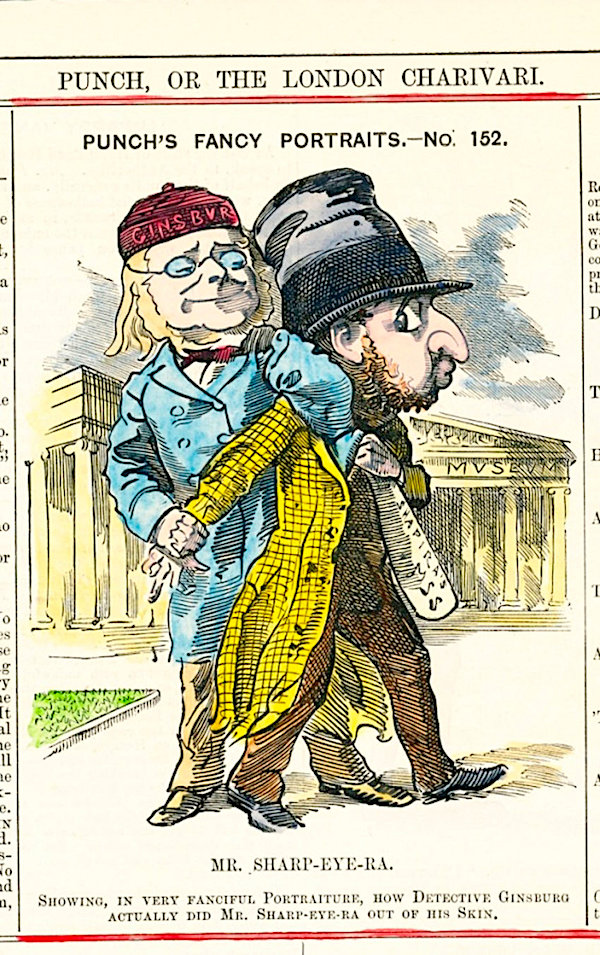 Maintaining his innocence, Shapira wrote to Ginsburg, saying he was made to look like "a fool" by the forgery declaration, suggesting his French nemesis Ganneau was to blame.

"I do not think that I will be able to survive this shame," he wrote. "Although I am not yet convinced that the M.s. is a forgery unless Monsieur Ganneau did it!" 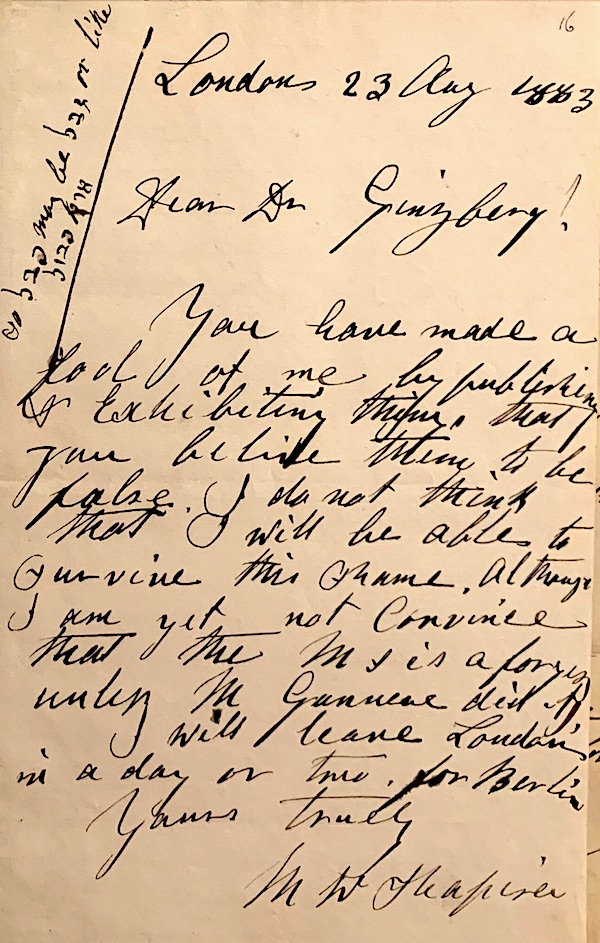 Six months later, Shapira committed suicide in Rotterdam, the Netherlands at the age of 54. His widow subsequently sold the scroll to a bookseller named Bernard Quaritch, but its whereabouts vanished around 1900, though some handwritten copies still survive.

Among today's researchers who believe Shapira's claim is Shlomo Guil, who wrote a paper in the Palestine Exploration Quarterly titled "The Shapira Scroll was an Authentic Dead Sea Scroll."

"The rejection of the Shapira scroll by the 19th century scholars was based upon several observations which may have been valid and logical at the time," said Guil. "However, the discovery of the Dead Sea Scrolls, particularly the paleo Hebrew scrolls, and current paleographic research have created a need to reconsider these observations and the conclusions which were drawn from them."

"The great majority of the documents of Qumran were written on leather and so was the Shapira scroll. Had the Shapira scroll been a forgery it would not have been written on leather for the simple reason that scholars at that time were not aware of ancient Hebrew leather manuscripts, dating over two thousand years. A forger, in order to avoid drawing attention, would have forged text on stone ... ." 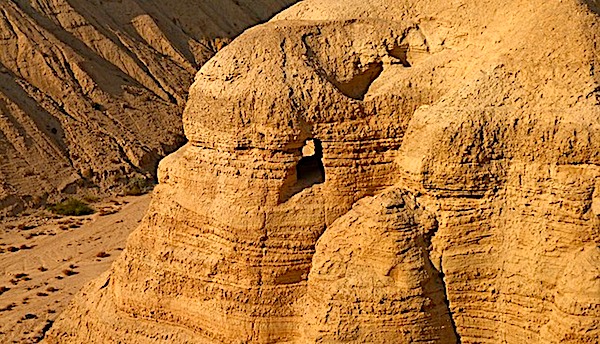 The Dead Sea Scrolls were found in caves in Qumran in the Judean Desert. (Image by max_gloin from Pixabay)

Michael Langlois, an epigrapher at the University of Strasbourg who attended a recent seminar on the controversy, noted similar doubts about forgeries were expressed by top scholars in 1947 when the Dead Sea Scrolls were unearthed.

"Can you imagine what would have happened if no one had had the guts to consider them authentic?” Langlois told the New York Times. "We would not even have the Dead Sea Scrolls today."

Live Science says it spoke with more than a half-dozen scholars not tied to the research, with most expressing skepticism, saying the text is likely a forgery.

One problem the scholars noted is that the text has been lost for more than a century, making it impossible to carry out scientific tests on it. In addition, Shapira had a track record of selling forgeries, they noted. In the 1870s, Shapira sold several inscribed objects supposedly created by the ancient Moabites that turned out to be fake. The writing on the text, the scholars said, contains a number of unusual features that suggest a 19th-century forger created them, such as letters written in stances that an ancient writer would not normally write in."

"Dramatic claims require dramatic, compelling evidence, and we just don't have it with regard to the Shapira strips. Rather, we have hypotheticals and circumstantial evidence, at best. And that's just not going to make the cut," said Christopher Rollston, a professor of Northwest Semitic languages and literatures at George Washington University, who gave a long list of reasons why the text is likely a forgery. "The script of the Shapira strips is flawed, and these flaws are similar to the sorts of flaws often found in modern forgeries through the decades," Rollston said.

Meanwhile, another major archaeological discovery was announced this month in Israel, as WND reported. 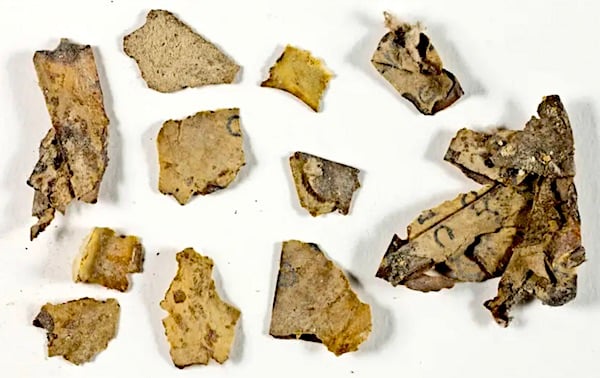 Hailed as the first such discovery in 60 years, a new set of Dead Sea Scrolls matching the Old Testament was unearthed in the Judean desert of Israel.

The Israel Antiquities Authority announced March 16 its four-year archaeological project located fragments of ancient Scriptures from the Book of the Twelve Minor Prophets, including the books of Zechariah and Nahum. 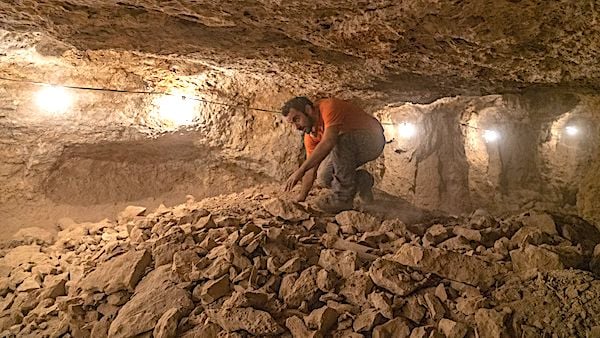 One fragment, written in Greek with God's name appearing in paleo-Hebrew, quotes Zechariah 8:16-17: "These are the things you are to do: Speak the truth to one another, render true and perfect justice in your gates. And do not contrive evil against one another, and do not love perjury, because all those are things that I hate – declares the LORD."

Another features Nahum 1:5–6, which indicates: "The mountains quake because of Him, And the hills melt. The earth heaves before Him, The world and all that dwell therein. Who can stand before His wrath? Who can resist His fury? His anger pours out like fire, and rocks are shattered because of Him." 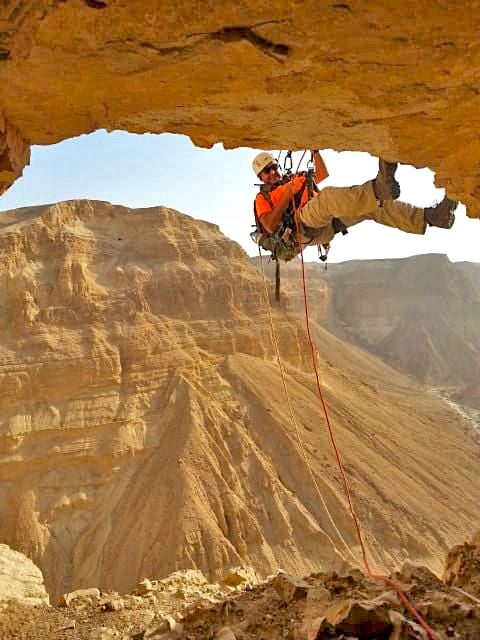 A researcher rappelling to the 'Cave of Horror.' (Photo by Eitan Klein, Israel Antiquities Authority)

The ancient treasures were located in what's known as the "Cave of Horror," which was discovered four years ago. Researchers actually had to rappel down a dangerous cliff to reach the opening of the cave, some 262 feet below the top, with gorges on each side. Archaeologists also used drones to survey portions of caves that were difficult to reach, adding about half of the area remains unexplored.