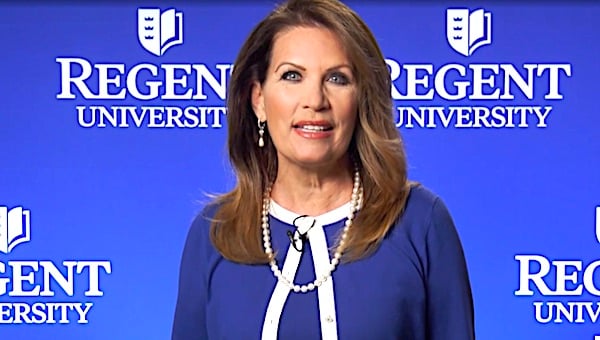 A former Republican member of Congress who ran for president, Michele Bachmann is now the dean of the graduate school of government at Regent University in Virginia Beach, Virginia.

The university, she told WND in an interview Wednesday, simply was a "forum for letting speakers put evidence out – it's their opinion, not ours – and then let people decide for themselves."

Some presenters, such as election experts John Fund and Hans von Spakovsky, addressed the general issue of fraud and the Democrats' controversial For the People Act while making no judgment about the  outcome of the 2020 vote.

Others, such as former White House trade adviser Peter Navarro, presented evidence to back their insistence that President Trump was the true winner.

Bachmann said her aim was to pull together the evidence "and let people decide for themselves: Was this a true and legitimate outcome or not?"

"And I'll tell you the evidence was overwhelming that it was not," she said. "People want truth and they want justice."

Bachmann said the reaction to the conference so far has been "profound" and people are "overwhelmingly grateful."

The former congresswoman noted that according to her IT team at Regent, the people who watched the conference online saw nearly three-fourths of the seven hours of presentations.

"My phone blew up afterwards," she told WND, "and people were saying I only intended to watch a little bit – I watched the entire seven hours."

Bachmann said she hopes the presentations will get an even bigger audience now that they are posted in separate videos on a page on Regent University's website.

"You can go on offense when you have the truth," she said. "We have information, and this is us just the down payment on telling the truth."

The conference, she said, is "the opening salvo."

Anyone who has questioned the election results, she said, has felt like they "were being beaten by a rubber hose by the media and told to get into a cage and shut up."

"What we did yesterday is we didn't shut up," Bachmann said. "And we started to talk."

Carson said that even speaking about having honest elections "causes all kinds of uproar today."

Americans must have confidence in our institutions, he said, but the 2020 election "was a national disgrace and the media still refuses to tell the truth about it."

He said the opposition to voter ID laws, insisting they amount to a racist "suppression" of minority voters, is racist in itself.

"What is racist is saying certain people don't have the common sense or the ability to get the ID," he said.

"What a bunch of garbage."

Carson said that whether America "remains a free and prosperous nation or it turns into something else," will depend on how its citzens address the issue of election integrity.

He said there was "plenty of fraud" in the 2020 election, but the courts "really haven't looked at the evidence."

"It's almost as if they are afraid," he said.  "We must insist on looking at the evidence."

Panel: HR1 "An Effort to Correct the Irregularities, or Institutionalize Them?"

Fund called HR1, the For the People Act, "rancid" and "the most dangerous bill ever when it comes to elections."

It's a complete federal takeover of the election process, he said, that hurts minorities more than anyone else.

He argued that all industrialized countries require ID at polls, including Mexico and Canada.

Fund, noting Senate hearings begin this week on the bill, said it doesn't appear to have enough votes to overcome the 60-vote filibuster. But it will "hang out there for quite some time," and when the Democrats think they can pass it, they will try. And they may try to get rid of the filibuster.

Von Spakovsky countered the claim by Democrats that there is no significant voter fraud.

"We have enough fraud in this country that we need to worry about it," he said, noting the Supreme Court has said it's concerned that there is enough fraud to impact a close election

"We have close elections all the time," he said.

HR1, he said, would "cement the worst aspects of the 2020 election into federal law and make them worse than that."

It would "gut' state voter ID laws and require every state to implement same-day voter registration. Election officials, therefore, would have no time to verify information and they couldn't ask for an ID when the person votes.

"If you have enough people [exploiting those loopholes],  you can change the outcome of the election," he said.

Von Spakovsky warned that Senate Democrats might try to get rid of the filibuster for "civil rights legislation" and argue that the For the People Act fits that description.

Ashcroft, the Missouri AG and son of the former U.S. attorney general, governor and senator John Ashcroft, said that if HR1 passes, he will immediately file a lawsuit.

He said the bill is "unworkable, immoral and unconstitutional," calling it a "swamp trifecta."

Navarro is the author of a three-part report presenting evidence from six battleground states he believes Trump won. He said he presented his report to Trump in the Oval Office and the president had it transmitted to every member of Congress.

"History wants to know if this election was indeed stolen," he said.

The Hoft brothers presented evidence, including video footage they obtained from Detroit's TCF Center on election night, that they have compiled from among the 1,700 articles they have published on the election.

See Jim Hoft's description of the TCF Center video, which was acquired through a Freedom of Information Act request after two months of effort:

Panel: Is Voter ID a Solution?

Nation, a civil rights attorney, pointed out that 75% of Americans support voter ID laws and 35 states have implemented them.

Steyn pointed out that to steal a national election, it's necessary only to steal a relatively small number of votes in six Democratic strongholds.

He noted that Philadelphia has been running corrupt elections since the Civil War, citing a 1904 book, "The Shame of the Cities."

Since then, thanks to technology, it's become easier to steal elections, he said.

During the 1920 election, Democrats in Atlanta prevented black women from voting, throwing their votes in the trash.

There's no point talking about foreign policy or any issue "if you don't have fair elections."

HR 1, he said takes all the things that make cities like Philadelphia and Atlanta corrupt "and imposes them on the country at large."

Bachmann asked Steyn if he thought it could be proved that the 2020 election was fraudulent.

Steyn said, yes, saying that more cases should be brought by citizens.

He said he found it interesting that since the cases have become moot, more judges have been ruling in Trump's favor.

Clements examined 85 cases brought by Trump and his allies and found that in cases in which the evidence was heard, Trump prevailed on the merits.

He pointed to more than 5,000 sworn affidavits from witnesses across the country who are willing to testify under penalty of perjury.

"Not one person has been found to have provided false testimony," he said.

"So we should feel very very good about the folks that risked their reputations to tell what they observed."

Clements said every one of them should have the opportunity to "sit in a chair, raise their hand, swear to tell the truth and give their story."

He said he discussed with Bachmann the possibility of holding a mock trial "if the courts won't do the right thing."

"It would take eight months because there is so much evidence out there," he said.

He said there also are 450 cases that touch on election integrity that don't involve Donald Trump.

Clements said that when skeptics confront him, he urges them to comb through the evidence and then get back to him.

They don't get back to me, he said.

"If you did your homework you would come back and arrive at a verdict … that your election was compromised."