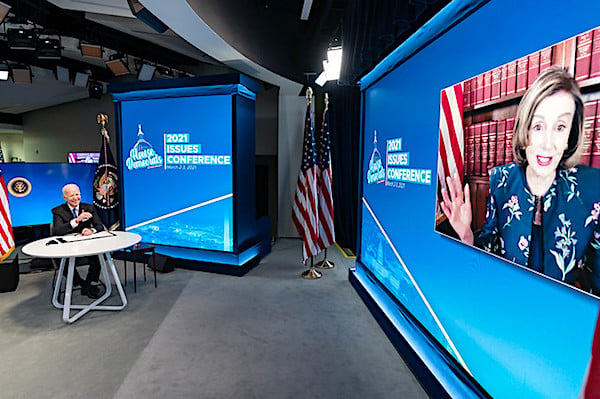 House Speaker Nancy Pelosi and Vice President Kamala Harris have been named defendants in a lawsuit that accuses them of unconstitutionally banning a prayer vigil held annually at the Capitol.

He wants to hold a Good Friday prayer vigil, as he has in previous years, on the Lower Western Terrace of the Capitol.

However, he is being prevented by a "no-speech zone" that the defendants have established.

According to the complaint: "Plaintiff’s application for a permit to hold a Good Friday prayer vigil is in the exact same location where he held his Good Friday prayer vigil in 2020. In 2020, plaintiff worked with Capitol Police to ensure that he was able to safely hold a prayer vigil on Capitol grounds even though COVID-19 was constraining the nation. The sidewalks and other public grounds appurtenant to and surrounding the United States Capitol, traditional public forums, are currently fenced off to the public and have been since January 6, 2021. Plaintiff’s speech has been unconstitutionally deemed unworthy by the defendants."

The complaint says the defendants' "blanket denial of the permitting processes on a traditional public forum is additionally impermissible because they act as a prior restraint on speech."

"In closing the sidewalks and public areas around the Capitol, including the Lower Western Terrace plaintiff seeks to utilize, defendants have effectively created a no-speech zone around the nation's Capitol. Defendants prevent any First Amendment activities on/in these areas, even though no specific threat to the Capitol has been identified in justification. Defendants further refuse to inform the plaintiff of when the public sidewalks surrounding these halls of power may once again be utilized for public speech."

Mahoney explained his position: "Plaintiff Mahoney is an ordained Presbyterian minister and holds firm the belief that Jesus Christ is Lord and Savior. Plaintiff Mahoney firmly believes that he has been commissioned by the Lord Jesus Christ to spread the good news of the gospel, and to speak out in support of human rights and justice. Plaintiff Mahoney has requested permission from the defendants to use the sidewalks appurtenant to and around the Capitol building, specifically, the Lower Western Terrace of the Capitol building, to exercise his First Amendment rights in the District of Columbia. The defendants informed Plaintiff Mahoney that he does not have consent to use these noted sidewalks, nor can plaintiff use the grounds at the Lower Western Terrace. These acts by defendants have effectively created a no-speech zone in one of the most important public forums in the nation."

The U.S. Capitol Police board and Karen Gibson, the sergeant of arms and doorkeeper for the Senate, also are defendants.

"If ever there was ever a location in need of divine intervention, of God’s favor and wisdom, it would be the U.S. Capitol where legislators from across the country gather to pass laws that have a profound impact on virtually every aspect of our lives," said the CEO of the Center for American Liberty, Harmeet K. Dhillon. "Denying a minister and faithful parishioners the ability to pray outside the U.S. Capitol is unfathomable and violates First Amendment guarantees for traditional public forums."

Mahoney said: "The ‘People’s House,’ as the U.S. Capitol Building is so rightly called, must be a place where all Americans are afforded the right to come and peacefully celebrate and express their First Amendment rights. Tragically, those rights and freedoms are being denied and prohibited."

The complaint notes the violence of Jan. 6 but argues there now "is no specific threat to the Capitol … that warrants, nor justifies, a continuation of the trampling of First Amendment activities."

The complaint alleges violations of freedom of speech, freedom of association and assembly, free exercise of religion, due process and the Religious Freedom Restoration Act.

It seeks a ruling that the constitutional violations violate Mahoney's rights and an injunction requiring permission for the event. Such orders then should be made permanent, the complaint contends.