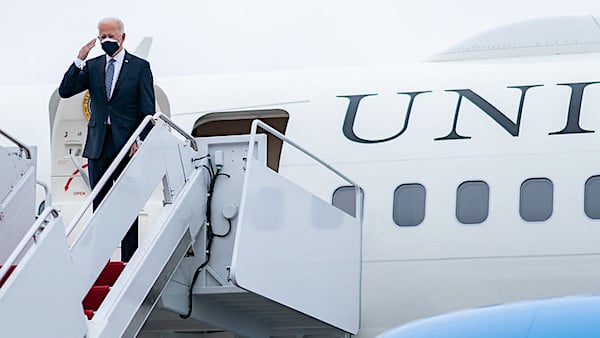 Joe Biden is taking the nation in the wrong direction, a majority of likely voters believe.

The Rasmussen survey found only 37% believe Biden is leading the nation in the right direction, while 57% say America is on the wrong track.

At this point in former President Donald Trump's tenure, 44% believed he was leading in the right direction, while 50% disagreed.

Biden's monthly job approval, according to Rasmussen, was 50% in February, with 49% disapproving.

At this point in his presidency, Trump had a 51% approval rating.

"When tracking President Biden’s job approval on a daily basis, people sometimes get so caught up in the day-to-day fluctuations that they miss the bigger picture. To look at the longer-term trends, Rasmussen Reports compiles the numbers on a full-month basis.

"Daily tracking results are collected via telephone and online surveys of 500 likely voters per night. The monthly numbers in this article are based on approximately 10,000 interviews each month with likely voters. The margin of sampling error is less than +/- 1 percentage points with a 95% level of confidence."

Washington Examiner columnist Paul Bedard in his "Washington Secrets" column noted that even those with strong views are close.

He noted that gives Biden a minus-five score, while Trump's was minus-four.

Bedard explained: "Rasmussen, sometimes under fire because Trump often cited their results while president, made a point to note that unlike most media surveys that typically favor Biden, it uses a model nearly identical to the partisan breakdown in 2020 election exit polls.

"The New York Times and CNN 2020 exit polls indicated the vote was composed of Democrats 37%, Republicans 36% and independents 27%. Rasmussen's model of 10,000 likely voters was weighted 38% Democrats, 36% Republican and 27% independents."

He noted that most media polls overweight Democrats.

"In the most recent Biden approval survey, done by Ipsos Reuters, for example, the president had a 57% approval rating. That poll included 45% Democrats."