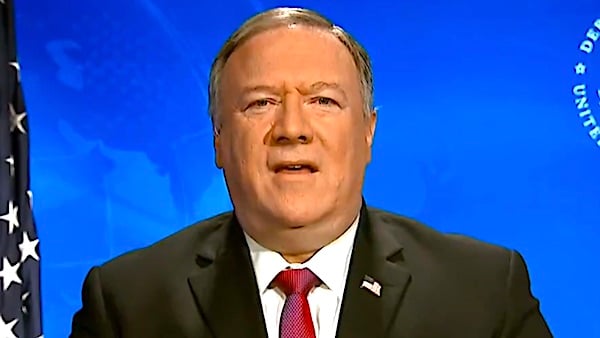 The Palestinian Authority has awarded pensions to imprisoned terrorists who injure or kill Israelis.

In the case of those who die in attacks, their families are put on the payment plan.

Consequently, some nations that financially support the PA have halted their funding, and Israel passed a law to discourage the payments. The U.S. enacted the Taylor Force Act, which blocks U.S. funding until the PA "changes this behavior."

There's no indication the PA has made any changes, but the Biden administration has signaled a desire to resume aid to the PA to jumpstart the Israeli-Palestinian "peace process," warned former Secretary of State Mike Pompeo in a column published by the American Center for Law and Justice.

Pompeo authored the piece along with Sander Gerber of the Jewish Institute for National Security of America and Stuart Force, the father of Capt. Taylor Force, who was murdered on a visit to Israel.

Any resumption of U.S. taxpayer aid is "a contravention of this important law and a further hindrance to peace," they argued.

The Trump administration brokered five agreements between Israel and historic foes by abandoning the assumption that any such deal much include the Palestinians.

Pompeo said the PA treats its "perverse benefits system as a sacred obligation."

"The longer the prison sentence, the greater the payments – meaning the deadlier, the more lucrative."

The PA employs some 550 people in its "pay-for-slay" bureaucracies, the authors said, and devotes more than 7% of its budget, or $350 million, to the program, compared to just $220 million for non-terrorist welfare programs.

"If the PA cannot revoke the laws and infrastructure conferring special treatment for terrorists, then the PA itself remains an obstacle to the 'peace process,'" they wrote.

"Yet, the Biden Administration claims renewed aid for the Palestinian people will not violate TFA, which bars aid programs that 'directly benefit' the PA. And news reports indicate the PA believes it can satisfy the administration by making terrorist compensation 'needs based' rather than based on the success of attacks, as it is now."

But the aid would violate the law "that sought to remove the United States from complicity in the PA's blood-soaked support for terrorism."

"If the Biden administration genuinely wishes to support the Palestinian people, it should insist that the PA cannot be a peace partner until it stops the glorification of terrorists. The PA’s refusal to make peace with Israel, accompanied by its celebration of violence, is the real source of economic and humanitarian problems in Palestinian society, not the loss of U.S. aid," Pompeo said.

"If the Biden administration tries to run around the TFA, it will be guilty of money laundering for terrorists."