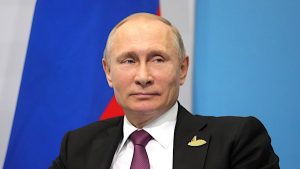 President Biden's recalled in an ABC interview this week that he manhandled Vladimir Putin in their 2011 meeting in Moscow, claiming he told the Russian president he had "no soul."

But someone who was with Biden during that visit – the White House stenographer at the time – presented a much different picture in a commentary Thursday for the National Pulse.

Mike McCormick said that since that meeting, Biden "and his staffers – with the help of Washington's press corps – have been spinning the story 180 degrees away from how it actually happened."

"Putin knows what happened. He was there. He knows he compromised Joe Biden, who appeared unprepared to deal with the ruthless, former-KGB agent. Regardless, Joe continues to perpetuate his 'I was the tough guy' lie," McCormick wrote in his National File piece.

A supporter of President Trump, he's the author "Joe Biden Unauthorized: And the 2020 Crackup of the Democratic Party," which includes a chapter on the Moscow visit.

McCormick recalled a press conference in which he stood about five feet behind Putin and about 12 feet from Biden, who then was vice president.

About 10 minutes in, McCormick said, Biden "attempted to start lecturing about his decades-old part in U.S.-Russian negotiations with the dreaded phrase, 'I've been around a long time. The first time I was here ...'

Biden got about one sentence further when his microphone and the TV camera lights suddenly went off and the media was sternly commanded to leave.

"This was Putin in all his KGB ruthlessness," McCormick said, stealing Biden's audience and rendering him "speechless."

"Across the table, I could see Vice President of the United States Joe Biden, in the now dimly lit room, looking as duped as an exhausted fish in the bottom of a boat. No protest, no complaint. No, hey, I wasn’t finished. Nothing. He was humiliated," McCormick said.

He said Putin or his team had likely plotted the whole thing.

"The most powerful man in Russia had neither fear nor respect for Joe Biden. He had just played with him for sport," McCormick said.

He linked to the transcript he prepared for the Obama White House Press Office to document that Biden stopped talking in mid-sentence.

'I don’t think you have a soul'

"So what are we to make of Joe Biden's 'you have no soul' line to Vladimir Putin, which is how he attempts to reclaim the upper hand?" McCormick asked.

In Biden's 2017 book "Promise Me, Dad," he centers on his oft-repeated appraisal of Putin, writing that while he was in Putin's office, he looked the Russian leader in the eye and said, "I don’t think you have a soul."

To which Putin, according to Biden, replied in English: "Good, then we have an understanding.”

"With no press in attendance, we’re asked to take the Vice President at his word," McCormick wrote. "But what are the chances – given what we already know about the exchanges between the two leaders – that this actually happened?

"Think about it. Biden has spent his whole career boasting about his diplomatic capabilities. Just at the end of the aborted press conference, he was talking about his meetings with Brezhnev. But suddenly he decided to call Putin – apropos of nothing – soulless?

McCormick said Biden "is accidentally giving away one of two things."

He "either blurted something out having been humiliated in the presser," or he "was abandoning his decades of foreign policy experience for a 'gotcha' moment in an empty room with no press."

"This doesn’t sound like the genius 'diplomat' Joe Biden has portrayed himself as for decades,"  McCormick commented, "nor the master strategist the media mindlessly report he is."

Putin to Biden: 'I wish you health'

In the interview Tuesday with ABC News anchor George Stephanopoulos, Biden said Putin was a killer and would "pay a price" for meddling in the 2020 election.

Putin responded by removing the Russian ambassador from Washington and replying to Biden at a news conference Thursday.

"I remember in my childhood, when we argued in the courtyard we used to say: it takes one to know one. And that's not a coincidence, not just a children’s saying or joke," Putin said, according to Reuters.

"We always see our own traits in other people and think they are like how we really are. And as a result we assess (a person's) activities and give assessments," he said.

Art Moore
Art Moore, co-author of the best-selling book "See Something, Say Nothing," entered the media world as a PR assistant for the Seattle Mariners and a correspondent covering pro and college sports for Associated Press Radio. He reported for a Chicago-area daily newspaper and was senior news writer for Christianity Today magazine and an editor for Worldwide Newsroom before joining WND shortly after 9/11. He earned a master's degree in communications from Wheaton College.
@@arthurdmoore
DeSantis sues Biden admin over 'illegal' border policy
Defense chief: Biden heard our advice to keep 2,500 troops in Afghanistan
Nearly half of voters oppose vaccines for young children
COVID-origins probe disbanded over ties to Fauci-backed scientist
'Crimes against humanity': Thousands of physicians condemn COVID policymakers
See more...

Wake up, Mr. President, we are in a cold war

Biden cracks down on border agents instead of border crossers