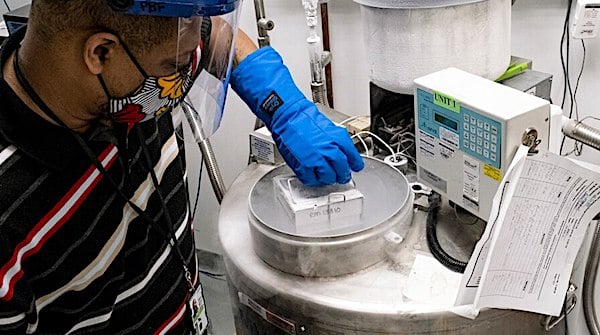 Newly obtained emails show scientists scrubbed an early warning that the novel coronavirus could have originated in a lab.

Just The News reported it obtained records that show a footnote in an early draft of a National Academy of Sciences report on the origin of the virus suggested adding an explanation that their conclusion that it had a natural origin "does not preclude an unintentional release from a laboratory studying the evolution of related coronaviruses."

A draft letter said, "The initial views of the experts is that the available genomic data are consistent with natural evolution [of the virus], and that there is currently no evidence that the virus was engineered to spread more quickly among humans."

Just the News said the exchanges were among several top scientists who later declined to acknowledge the possibility that the virus had escaped from a lab.

In February of 2020, the White House Office of Science and Technology Policy directed the National Academies of Sciences, Engineering, and Medicine to "rapidly examine the information and data needed to help determine the origins of the novel coronavirus that is causing a global outbreak of respiratory illness."

At the time, the scope of the threat from COVID-19 wasn't clear, although it had spread around the world.

The communist Chinese government has claimed the virus originated in a wet market in Wuhan, China. But many experts believe there's a strong possibility it emerged from the Wuhan Institute of Virology a few miles away.

A team of researchers commissioned by the World Health Organization concluded in February it was "extremely unlikely" the virus escaped from a laboratory.

However, one of the WHO team members was Peter Daszak, who had funneled federal grant money to the Wuhan Institute of Virology to support experiments involving the "emergence potential" of coronaviruses.