Lawmakers typically warn that "the devil is in the details" of legislation, but the Democrats' For the People Act is so diabolical, Satan may well have been its author, contends Sen. Mike Lee.

The mild-mannered Utah Republican was speaking Wednesday about a bill he and his colleagues argue would effectively nationalize election laws implemented by states in the 2020 vote that opened the door to fraud.

Lee said in an interview with "Fox & Friends" the bill is "rotten to the core," and he disagrees with "every single word in H.R. 1, including the words 'but,' 'and,’ and 'the.'"

"This is a bill as if written in hell by the devil himself," Lee said. 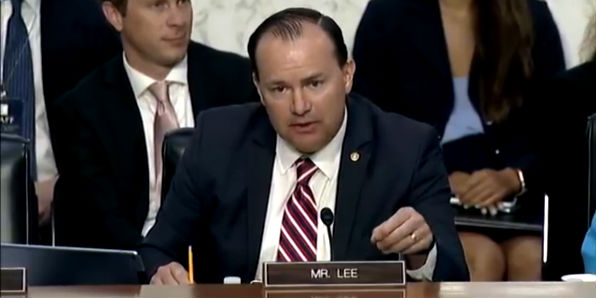 He said it removes constitutionally designated authority from the states and gives to Congress "all sorts of decisions the federal government has no business making."

The legislation, charged Lee, is an apparent "effort to ensure an institutional revolutionary Democratic Party of sorts — one that can remain in power for many decades to come."

The House already has approved the plan, and the 50-50 Senate now is considering it.

Lee argued that elections in the United States have been conducted at the state and local level. But Democrats are "completely flipping that principle on its head so that these things can be micromanaged from Washington."

"That’s wrong. That's really wrong. It's bad policy," he said. "As much as anything else, it's wildly unconstitutional."

Attorneys general from 20 states share Lee's view that the bill is unconstitutional, warning in a letter last week to Senate and House leaders they may have to take Congress to court.

The chief legal officers said the For the People Act of 2021 "betrays several Constitutional deficiencies and alarming mandates that, if passed, would federalize state elections and impose burdensome costs and regulations on state and local officials."

The White House said in a statement the legislation is "urgently needed."

The bill effectively repeals state voter ID laws, allowing individuals to vote without a sanctioned ID by simply signing a statement declaring their identity. It would give felons the right to vote and expand Election Day registration. It also would force taxpayers to give $6 to political candidates for every $1 the candidate raises.

Mail-in voting, which is highly susceptible to fraud, would be expanded. And the bill allows third parties, including political activists, to collect and deliver ballots. It also would ban witness signature requirements for mail-in ballots and force states to expand the voting period. And it would insert partisan politics into the bipartisan Federal Election Commission.

House Speaker Nancy Pelosi, D-Calif., said the passage of the bill in the lower chamber "reminds me of what it might have felt like at Valley Forge."