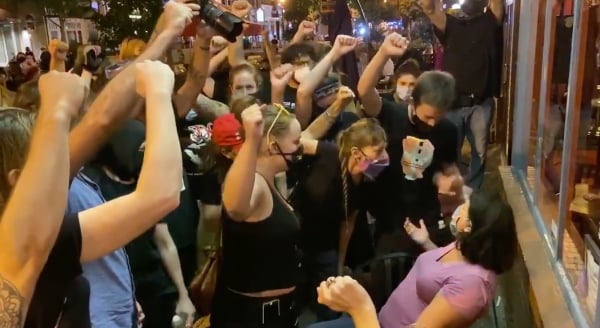 Deeply illiberal mobs of so-called “progressive, anti-racists” have escaped our nation’s college and university campuses and threaten many other institutions, including museums, sports and entertainment, corporations like Coca-Cola, and even our elementary, middle, and high schools. The various dictates of critical race theory — which promotes a logic of harm and victimization based on race and identity to the point that individuality is erased — have pervaded general discourse as well. This worldview is so disorganized that even extremely liberal outlets like The New Yorker note that, “Liberals increasingly embrace the progressive critique of structural racism, but they are far less certain of what to do about it.” More specifically, woke mobs have been at the center of the center of speech suppression in the education universe, and self-censorship has moved from school buildings into the mainstream today.

While there is confusion about what these mobs hope to do beyond “cancelling” others, new data make it clear that these mobs have already deeply damage democratic discourse as many Americans have been scared into silence for fear of saying the wrong thing and being cancelled.

For instance, it is well known that college students regularly self-censor; the Foundation for Individual Rights in Education found in its 2020 survey that students — notably those in the political minority — are limited in what they say and are uncomfortable and reluctant to challenge peers and professors on controversial topics. Sixty percent of students report that they have at one point felt they could not express an opinion on campus because they feared how other students, professors, or college administrators would respond.

These forces of fear and extremism have pervaded into high schools as well, with real fear of speaking up against the irrational and narrow woke mobs on the part of parents and families. Recent news stories on our elite high schools note that “[parents are] terrified of running afoul of the new orthodoxy in their children’s private schools” such that “they could face profound repercussions if anyone knew they were talking.

The educational world is the place where ideas are questioned and debated and truths emerge from disagreement. The disengagement and intellectual disenfranchisement of significant numbers of students and families is dangerous to the legitimacy of the entire educational enterprise and destroys open inquiry which is how society progresses.

Even more disturbing, however, is the fact that silencing oneself has become a reality for many outside the world of education. In fact, thanks to a new survey conducted by ACTA and eighteen92 of 800 adults in Illinois — a microcosm of the American experience that possesses not only a diverse citizenry, but large and small cities along with rural areas — almost equal numbers of Illinois residents report having censored themselves on salient socio-political issues out of fear of reputational consequences.

Residents of the Land of Lincoln were asked, “How often, if ever, do you stop yourself from expressing your opinion on controversial political and social issues?” An astounding 30% of Illinoisans say that they do this “often” and another 34% state that the edit themselves “sometimes” — meaning that almost two-thirds of (64%) those in the great Prairie State self-censor their opinions. This is not healthy. However, it turns out that 60% of liberal identifiers, 69% of moderates, and 71% of conservatives stop themselves from saying their true opinions. There is a bias here, but this remains incredibly dangerous as large majorities of even liberals are afraid of provoking the mob.

Going further, when asked about why one self-censors, some Illinois residents — about 20% — state they do not want to hurt other people’s feelings, but far greater numbers admit they are worried about personal, reputational, or professional consequences from challenging certain seemingly prevailing sentiments. Almost a quarter state they have held their tongues because they know they “Will be unfairly criticized” and another quarter “Worry about professional or academic consequences if [they] say the wrong thing.” While another quarter stated that they have silenced themselves for some other reason, it is clear that very significant numbers of Illinoisans are worried about blowback due to their ideas.

Breaking this down a bit further, the data reveal just how much more conservatives silence themselves out of fear compared to liberals in Illinois. While just 12% of liberals state they censor themselves for fears of being unfairly criticized, three times as many conservatives —37% — state they self-censor. A quarter of liberals are worried about professional or academic consequences of saying the wrong thing compared to a fifth of conservatives, but the simple fact is the data show that 6 in 10 conservatives are afraid to speak their minds out of concerns for reputational consequences compared to a much lower 36% of liberals. Of course, all of these numbers for those on both the left and the right are too high, but it is clear that conservatives are living in fear of sharing their views.

Illinois was home to the great Lincoln-Douglas debates, where both men talked about their views for extended periods of time and had the chance to genuinely respond to each other. Open discourse around controversial issues is one of the great legacies of the state and the data from ACTA shows that this legacy is being tarnished. Looking at the bigger picture, we now have compelling evidence that woke impulses are infecting society down to the individual level, well beyond the corporate and educational universes. Self-censorship and fear cannot trump logic, reason, and recognition of our humanity. If we do not push back on these totalitarian impulses, our fragile democracy could collapse and we are better than that.