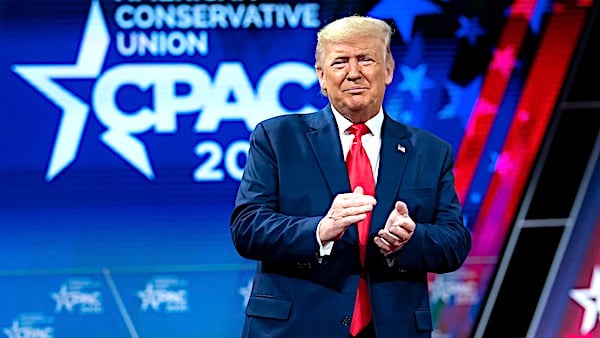 “I thought the speech was a dud myself,” Kasich said Monday on CNN’s “The Situation Room With Wolf Blitzer.”

Kasich said Trump’s Sunday speech at the Conservative Political Action Conference (CPAC) made him think of a boxer with “no sting in the punch.”

“You couldn’t knock anybody down or knock anybody out with it. And it was not impressive to me. And remember, there were like 1,400 people in a ballroom. I mean, if this is not the crowd that’s going to tear down the rafters, I don’t know where they are,” Kasich said.

Kasich, a former governor of Ohio who ran for the Republican nomination for president in 2016, said he doesn’t believe Trump’s speech “inspired anybody.”

“I’ve been saying for a couple of weeks … that I think he’s fading. I really do. And yesterday was just not impressive to me. I didn’t watch that much of it, but I watched enough of it to kind of get a sense,” Kasich said.

Trump also dismissed rumors that he was beginning his own political party. The former president hinted at a 2024 presidential bid, saying to the CPAC attendees he “may even decide to beat [Democrats] for a third time.”

“My wife told me that somebody there in the audience said that they were bored because he kept mentioning the same thing over and over and over again,” Kasich said. “Look, he’s just a former president. He doesn’t have the news there every day. This is fading.”

Kasich said although some are inspired by Trump’s speech, the GOP is getting smaller. Kasich said he believes Trump’s influence will keep decreasing.

“And he’s like that old fighter that’s in the corner, he wants to come out one more time, but I don’t think he’s got it,” Kasich said.