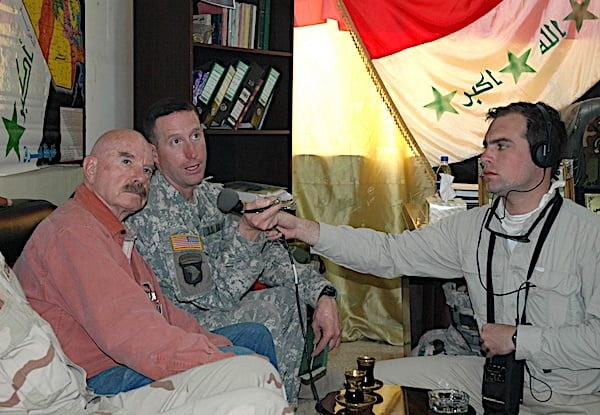 Editor's note: G. Gordon Liddy, the legendary radio talk-show host who decades earlier spent time in prison for his role in the Watergate affair, died Tuesday at age 90 at his daughter's home in Virginia. Franklin Raff, author of the following article, was a longtime friend and executive producer for Liddy at Radio America.

As G. Gordon Liddy's producer, sidekick and aide-de-camp for nearly a decade, I had a certain responsibility for both his private well-being and his public image. This left me in a quandary when we found ourselves at a rifle range in Iraq.

Fifty or so Marines had turned up to meet Mr. Liddy, and he quickly accepted their challenge to put a group or two on target at about a hundred yards. Gordon was the man the FBI nicknamed "Sudden" for his quick draw and accurate fire, and I could tell they wanted to see just how good the G-Man really was. The rifles were RPKs, long-barreled variants of the famous Kalashnikov AK-47. We charged our magazines with ten or so cartridges apiece, chambered them, lay prone and sighted our targets while the Marines looked on.

Now these rifles had iron sights – no scopes – and at that range the front sight blades pretty much covered up the targets. I'm a seasoned shot but a tight group with this weapon seemed utterly impossible for me at that distance, much less, I thought, for a septuagenarian who had left his glasses back in the Humvee.

I therefore decided to fire one burst at my own target, and two more, surreptitiously, at that of my liege. We took the shots and the Marines followed us downrange to check our targets. As I stared at the mess I had made of my own paper, with five or so holes scattered about, I heard Liddy's familiar growl: "Frrrrrr-anklin!"

Walking over to his target, I saw it had ten neat holes in a tight group right at the center – his shots – and a mess of my own all over the rest of the place. I could feel my face go beet red. Nobody was fooled but me. Everyone had a very good laugh, and I learned what was quickly known by anyone in his periphery: There are no circumstances in which it is advisable to underestimate G. Gordon.

That was the trip on which it became known to our handlers that certain Iraqi officials with whom we had been in contact thought Gordon might be operating in-country for U.S. intelligence, using "talk radio" as cover for access to high-ranking Iraqi Army personnel. Whether or not this was true, it made for bemused conversation in our entourage.

That is, until The Mahdi Incident. 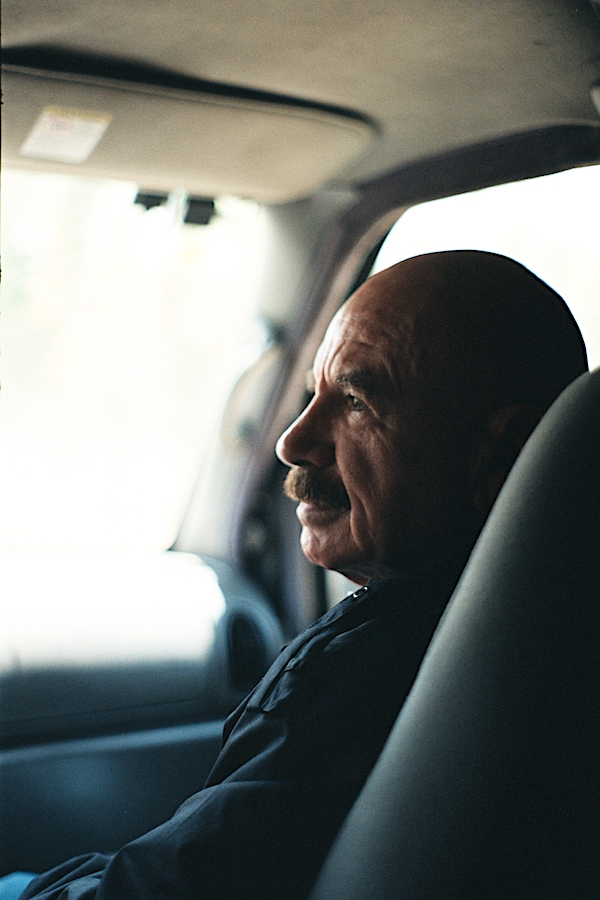 I had arranged an interview with a perfectly amiable XO by the name of Mahdi (maa-DEE, roughly), and after small talk over Chai tea with some other VIPs at a recently handed-over Iraqi Army base, I turned on the recording equipment. The G-Man proceeded to ask questions, some of them rather difficult, pertaining to the readiness of his forces. As the translated interview progressed, however, every Iraqi in the room – especially the officers, and Mr. Mahdi in particular – began to show unusually pronounced outward signs of nervousness and discomfort. Something was very wrong and we had no idea what it was, so we simply wrapped up and got out of there.

We later learned that Gordon had simply but repeatedly mispronounced the interviewee's name as MACH-dee, which happens to be the sobriquet of the long-awaited Twelfth Imam.

The result, according to a Public Affairs officer we met sometime later, was something to the effect that Gordon had given a handful of religious Shia flag officers the idea that the CIA had fingered this poor fellow Mahdi as the Islamic Messiah and had sent Gordon to check him out. Moreover, word had gotten around. It was a problem, and nobody on our side knew quite what to do about it.

To be sure, Gordon and I laughed so hard, for so long, we could barely stand.

The next day, the G-Man emerged from his FOB hut sporting an Israeli Defense Forces t-shirt. (He earned his Israeli Paratrooper wings some time ago.)

"Thought I'd wear this one today. Ought to drive ‘em absolutely bonkers!"

If G. Gordon Liddy seems to you to have lived one of the richest, most daring and unusual lives imaginable, I assure you that what you see in the media, what you have heard on his show, or what you may have read in his best-selling autobiography, "WILL," comprises but a glimpse. Even (and especially) for me, there are as many questions as answers.

I take you, for example, to Ramstein Air Force Base near Frankfurt, Germany, where Mr. Liddy and I once disembarked when our plane was grounded due to a technical malfunction. It would be some time before they could fix the aircraft, so we decided to go through German customs and immigration in hopes of seeing a little bit of the city.

Gordon had mentioned on-air that his border crossings had occasionally been inconvenienced by the fact he had been tagged as "Amerikanischer Espion Commando" on watch lists, but I frankly suspected it was all an exaggeration. Nothing, then, prepared me for the reaction of the two young Germans who came out to Ramstein to process our papers.

It started out as nervous chatter and gun-fondling as they stared at their computer screens; it blossomed into heated group huddles, quick entrances and exits and innumerable simultaneous phone calls by various officials, finally culminating in the arrival by car of two snow-covered, trench-coated plainclothes agents who looked as if they were right out of a John Le Carre novel. They got a quick visual on Gordon, ferociously reprimanded the whole detail and left as quickly and mysteriously as they came.

We weren't even waved on: The Germans just sort of bowed their heads sheepishly and stayed that way until Mr. Liddy decided to move. All of this occurred in the span of 30 minutes. I followed on his heels as always, my papers unseen, unmolested.

On the tantalizing subject of the mysteries which invariably accompany the man, there is so much more to tell, a few things I will never tell, and so many little things I cannot explain.

A few years ago, for instance, I sought to buy Mr. Liddy a Special Operations Association special edition .45ACP 1911 handgun as a gift. It was quite elegant, and I knew that Mr. Liddy was proud of what I thought was his honorary membership in the S.O.A. One must do such things by the book, however, and I wondered whether it would be entirely kosher for me to present such a thing to an honorary member. I telephoned the president of the S.O.A. and our conversation was as follows:

"It's a good question, Franklin, but Mr. Liddy is a full member, not an honorary member."

"But – he was in the FBI and the Treasury, yes, and an officer in the Korean War – but only CIA Special Operatives and elite Special Forces unit members can become – "

"Franklin, Gordon is WAY beyond fully, formally qualified for full membership in the S.O.A."

To his great credit, he then informed me that while he appreciated my taste in guns, I was, in fact, knowingly and willingly planning to purchase a firearm for transport across state lines for delivery to a convicted felon. I opted for a different gift. 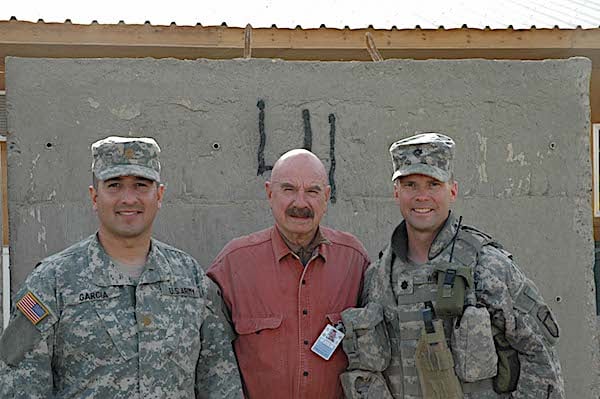 Of thousands of extraordinary conversations and experiences with, and in the orbit of, Mr. Liddy – on the air, off the air, in the air, and even at sea – one remains my unequivocal favorite.

We returned to the United States on a direct flight to JFK from Kuwait. Five-thirty in the morning, one of those soft, foggy, early mornings particular to the Eastern Seaboard and New York especially, when the growing energy of the sky and the people around you start to become palpable. We had found some good coffee and were the only ones in sight as we approached Customs.

A tough-looking officer at the booth sleepily took G. Gordon's passport without looking up. I watched him as he flipped backward through the stamps.

Falling on the front page, his eyes widened. After a time, he looked up at Gordon.

All of a sudden, this big, burly man's face lit up with the happiest, most child-like expression you can imagine.

The man closed the passport, eyes always on Gordon. His expression darkened but he was still smiling.

"Mr. Liddy, I don't know what you were doing out there, and frankly, I don't think I want to know. But I sure am glad you're back. Welcome to New York, Sir. Welcome home."

Charitable, dutiful, true to his religion, and of course intensely loyal, G. Gordon also had the sharpest, most captivating and affectionate sense of humor of anyone I have ever known.

It was not enough to survive: Gordon prevailed. He is now reunited with his extraordinary wife Frances, where he always wanted to be, but we may all be grateful for the times we accompanied him, inspired and delighted.