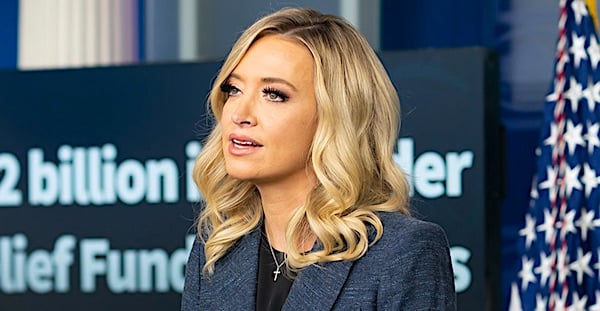 “There is a modicum of respect that I think reporters and those at the podium and in a political role people should have for one another.”

McEnany described the difference in how she was treated compared to other White House press secretaries as “disparate, unfair.”

McEnany said although “there are some incredible reporters who to this day represent the kind of journalism I think is good,” it was apparent some reporters showed they “were more interested in being, you know, political operatives let’s say than journalists.”

The former White House press secretary extended her best wishes to her successor and said she left Psaki a note expressing those sentiments. McEnany recalled in her only encounter with Psaki that she was “very kind” and expressed the same about “some of her colleagues in the press shop.”

“But it’s different in a big way,” McEnany said of press briefings under President Joe Biden’s administration. “I’ll never forget watching one of the early press briefing and [Psaki] was asked about the Antifa riots and I believe said she hadn’t spoken to the president about that and they let her move on,” McEnany said.

“Whereas, if I would have been asked that about violence on the other side of the aisle, that wouldn’t have been an answer that flew. Nor should it have. And so I think just the standards are different,” McEnany said.