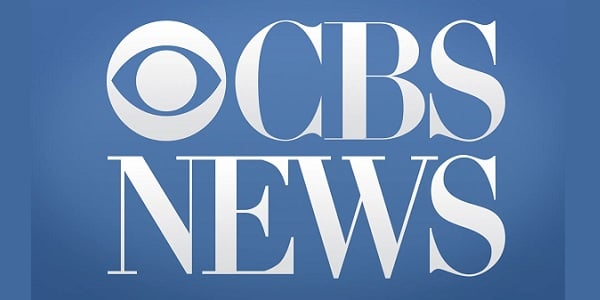 Despite strong rebukes from key Democratic officials, "60 Minutes" is standing by a story universally criticized for using deceptive editing to accuse Florida Republican Gov. Ron DeSantis of engaging in a "pay for play" in the rollout of the COVID-19 vaccines.

A "60 Minutes" spokesman told Mediaite on Tuesday, "As we always do for clarity, '60 Minutes' used the portion of the governor’s over two-minute response that directly addressed the question from the correspondent." 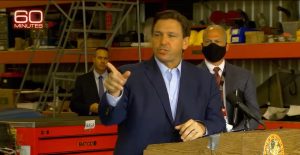 Then, in a statement later Tuesday, the network argued that DeSantis and other officials had declined interview requests, concluding with, "Our Sunday night story speaks for itself."

In a portion of a news confererence aired by "60 Minutes," CBS correspondent Sharyn Alfonsi accused DeSantis of allowing Publix grocery stores in Palm Beach County to deliver vaccines before other drugstore chains as a reward for a $100,000 donation to his campaign.

DeSantis, calling her claim a "fake narrative," then gave a detailed, lengthy explanation. But "60 Minutes" didn't show the governor's full answer, editing the video to make it look as if he had no defense.

In fact, the Democratic head of the the Florida Division of Emergency Management, Jared Moskowitz, said Monday it was his agency that chose Publix, not the governor.

The Democratic mayor of Palm Beach County, Dave Kerner, said Monday the "60 Minutes" reporting "was not just based on bad information — it was intentionally false."

Kerner said CBS News "had that information, and they left it out because it kneecaps their narrative."

In its statement Tuesday, "60 Minutes" disputed Kerner's claim that it declined his offer "to provide my insight," contending CBS spoke "on the record" with him.

A spokesman for Publix Super Markets provided a statement to "60 Minutes" calling the charge of pay for play "absolutely false and offensive."

DeSantis held a news conference Wednesday in Tallahassee to present more of the evidence he says "60 Minutes" ignored after charging the CBS report was "done with malicious intent and a reckless disregard for the truth."

"If they’re going to come down here and smear our efforts or smear me or smear great companies in our state, I’m going to hit them back right between the eyes," DeSantis said.

When Florida state data revealed people of color were vaccinated at a much lower rate than their wealthier neighbors, 60 MINUTES reported the facts surrounding the vaccine’s rollout, which is controlled by the governor. We requested and conducted interviews with dozens of sources and authorities involved. We requested an interview with Gov. Ron DeSantis, he declined; We spoke to State Emergency Management Director Jared Moskowitz twice, but he declined to be interviewed on camera for our story until well after our deadline. The idea we ignored their perspective is untrue. Counter to his statement yesterday, we also spoke on the record with Palm Beach County Mayor David Kerner. For over 50 years, the facts reported by 60 MINUTES have often stirred debate and prompted strong reactions. Our story Sunday night speaks for itself.

Moskowitz, rebutting the CBS statement on Tuesday, said he did speak to "60 Minutes."

"Never said I didn’t," he wrote on Twitter. "They were very nice, but I told them that the Publix story was 'bullshit.' Walked them through the whole process. The fact that I didn’t sit down on 'camera' because I am responding to a 100 year emergency doesn’t change the truth."

"I said this before and I’ll say it again. @Publix was recommended by @FLSERT and @HealthyFla as the other pharmacies were not ready to start. Period! Full Stop! No one from the Governors office suggested Publix," he wrote on Twitter Sunday. "It’s just absolute malarkey."

Political analyst Joe Concha of The Hill noted that in its response, CBS "doesn't even address the fact that most of DeSantis's comments – which were crucial to the piece – were edited out. Instead, we get a non-specific statement around the story speaking for itself. "

Concha pointed out that the targeting by "60 Minutes" of DeSantis comes as his stock rises in the Republican Party. If President Trump chooses not to run in 2024, polls indicate Republicans favor the Florida governor.

Here is DeSantis' full reply to Alfonsi at the news conference, with the part "60 Minutes" deleted in bold text:

That, that’s a fake narrative. So, first of all, when we did, the first pharmacies that had it were CVS and Walgreens. And they had a long-term care mission. So they were going to the long-term care facilities.

They got vaccine in the middle of December; they started going to the long-term care facilities the third week of December to do LTCs. So that was their mission. That was very important. And we trusted them to do that.

As we got into January, we wanted to expand the distribution points. So yes, you had the counties, you had some drive-through sites, you had hospitals that were doing a lot. But we wanted to get it into communities more. So we reached out to other retail pharmacies — Publix, Walmart — obviously CVS and Walgreens had to finish that mission. And we said, we’re going to use you as soon as you’re done with that.

For the Publix, they were the first one to raise their hand, say they were ready to go. And you know what, we did it on a trial basis. I had three counties. I actually showed up that weekend and talked to seniors across four different Publix. How was the experience? Is this good? Should you think this is a way to go? And it was 100% positive.

They calculated that 90% of their seniors live within a mile and a half of a Publix. And they said, “We think that would be the easiest thing for our residents.” So, we did that, and what ended up happening was, you had 65 Publix in Palm Beach. Palm Beach is one of the biggest counties, one of the most elderly counties, we’ve done almost 75% of the seniors in Palm Beach, and the reason is because you have the strong retail footprint. So our way has been multifaceted. It has worked. And we’re also now very much expanding CVS and Walgreens, now that they’ve completed the long term care mission.

"60 Minutes" compared the state's vaccine rollout to "The Hunger Games" movie, contending wealthy communities in Florida were granted priority access to the vaccine.

WATCH: CBS and @60Minutes excluded context from Florida Gov. Ron DeSantis in which he explains the steps his government took to make the decision to partner with Publix on vaccine distribution.

The 60 Minutes version is first, followed by the full answer from DeSantis. pic.twitter.com/2KRQKPLOe7

But as the scandal unfolded, CBS News stood by the documents, telling WND at the time they had been "thoroughly investigated by independent experts, and we are convinced of their authenticity."