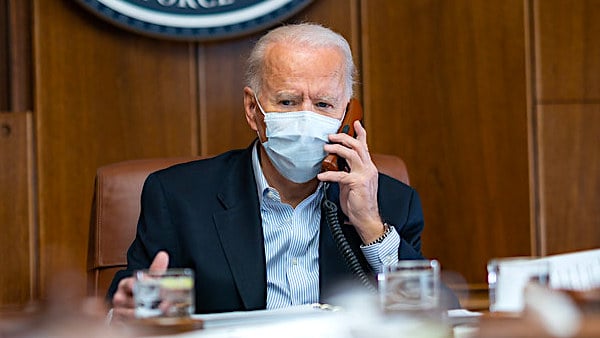 President Joe Biden is preparing to issue an executive order that would require companies to disclose the risks they face from climate change, special climate envoy John Kerry said.

While Kerry did not elaborate, the order would fulfill a Biden campaign promise to require all public companies to report their emissions and climate-related risks, the Washington Examiner reported.

Biden already has ordered the Treasury Department, the Securities and Exchange Commission, the Commodity Futures Trading Commission and the Federal Reserve to address the risks climate change poses to the financial system.

In fact, Kerry affirmed the objective of the Biden's climate disclosure requirements is to impact the allocation of capital.

"Suddenly, people are going to be making evaluations considering long-term risks to their investment based on the climate crisis," he said Wednesday at a virtual event hosted by the International Monetary Fund.

"And that will encourage new investment, as well as laws in countries," he said.

Among the laws, he said, are tax incentives to support clean energy technologies.

In 2010, the Obama-Biden administration issued SEC guidance on climate disclosures but the reporting was not required.

The Examiner noted that some investors, who seek to align their portfolios with the Paris climate accord, have called on governments to require climate disclosure.

In an interview with CBS "This Morning" in February, Kerry said the world has only more nine more years to "avert the worst consequences" of the climate crisis.

“[T]he scientists told us three years ago we had 12 years to avert the worst consequences of climate crisis. We are now three years gone, so we have nine years left," he said.

In 1992, at the Rio Climate Summit, activists said the world had only 10 years to get global warming under control.

Biden announced in February that the U.S. has officially rejoined the Paris accord, without Senate ratification, one month after signing a directive reversing the Trump administration's exit.

The president said the United States can "no longer delay or do the bare minimum to address climate change."

"In five years, scientists predict we will have the first ice-free Arctic summer, that exposes more ocean to sunlight," he said. "Ocean is dark, it consumes more of the heat from the sunlight, which then accelerates the rate of the melting and warming rather than the ice sheet and the snow that used to reflect it back up into the atmosphere."

Some of Kerry's critics have noted his regular travel by private jet. In his last year as secretary of state, he boasted of traveling more than 1 million miles over three years.