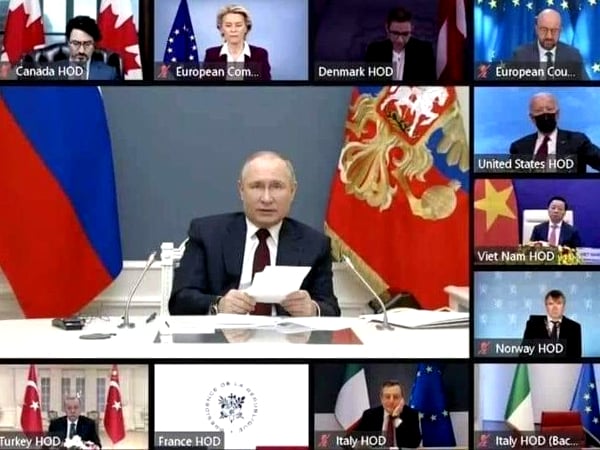 The image of President Biden as one of the lone world leaders wearing a mask during an online global summit illustrates that the White House policy on the issue is mere "theater," discouraging people from getting vaccinated, contends U.S. Sen. Rand Paul, R-Ky.

The fact-checker Politifact argued that photos from the State Department show officials were in the room with Biden at various times, including Secretary of State Antony Blinken, Special Presidential Envoy for Climate John Kerry and Treasury Secretary Janet Yellen.

But Paul was talking about a general policy, and those officials presumably were vaccinated as well.

"If I want to go visit the White House, Republicans and Democrats who go visit, even though they’ve all been vaccinated or had the disease, they’re being tested with a deep sinus test," Paul said in a Fox News interview.

"And they’re being told to wear the N95 masks to go in the White House, even though they’ve all been vaccinated," he said.

"So there is no science behind any of this. It's fear-mongering."

Paul warned that it also has "a deleterious effect."

"It's discouraging people from getting the vaccine because they're saying, well, if the vaccine doesn’t mean anything, it doesn’t seem to have any protective benefit, you get no benefit," he said.

Paul said that many Americans are asking why they should get vaccinated if they can't quit wearing a mask.

"I think that's the wrong attitude. But this is what's coming from Biden and the so-called scientists that he’s putting forward," he said.

At the White House on Monday, Fox News White House correspondent Peter Doocy asked Press Secretary Jan Psaki why Biden seemed to be the only world leader at the summit not wearing a mask.

"Because he is sending a message to the world that he is putting in place precautions and continuing to do that as the leader of the United States," she replied.

Psaki mentioned there were additional personnel present "and that's the sort of model that we try to keep ourselves to."

"That's actually for in your private home," Psaki said. "So it's not workplace guidance."

Fox’s Peter Doocy challenges WH Press Sec Jen Psaki: "Why was President Biden the only world leader at the climate summit Zoom who was wearing a mask?" pic.twitter.com/XNPhDHZ7F3

The CDC is expected to make an announcement on Tuesday regarding a revision in its guidelines for people who are outdoors.

At the moment, the CDC advises that "masks may not be necessary when you are outside by yourself away from others, or with people who live in your household."

Last month, as WND reported, Paul blasted presidential COVID adviser Dr. Anthony Fauci, asking him what scientific studies he could cite that indicated people who have had the infection or a vaccine will spread the coronavirus.

"If we're not spreading the infection, isn't it just theater? You've had the vaccine and you wearing two masks, isn't that just theater?" the senator asked during a hearing.

Earlier this month, Paul urged Americans to throw away their masks and oppose vaccine passports.

"The left has gone completely COVID crazy," the Kentucky Republican says in a fundraising pitch.

"This is the slippery slope I warned about and it's exactly what I'm fighting to defeat in Washington," he said.

Art Moore
Art Moore, co-author of the best-selling book "See Something, Say Nothing," entered the media world as a PR assistant for the Seattle Mariners and a correspondent covering pro and college sports for Associated Press Radio. He reported for a Chicago-area daily newspaper and was senior news writer for Christianity Today magazine and an editor for Worldwide Newsroom before joining WND shortly after 9/11. He earned a master's degree in communications from Wheaton College.
@@arthurdmoore
Police suspect arsonist destroyed historic Catholic church building
Alveda King on Roe overturn: Praise God, but 'the work's not over'
Democrat law emboldens criminals, illegal drivers to ignore police
Pfizer trial data: Hospitalization MORE likely with COVID shot
'Expert' panel calls for even MORE federal control of health care
See more...