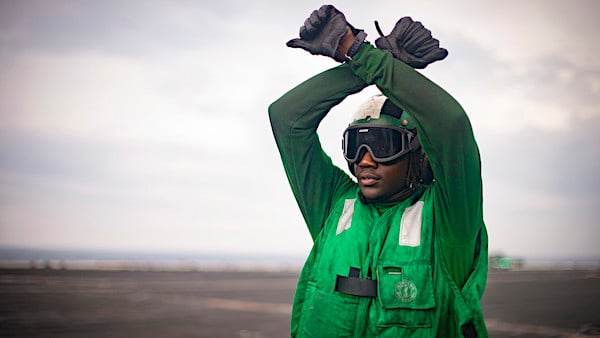 The widely expressed concerns months ago about civil liberties and discrimination seem to be waning as President Biden ponders requiring all troops to be vaccinated and some Democratic governors announce people who get the COVID-19 shots will be given special treatment.

On Friday, Biden told NBC News' Craig Melvin it's a "tough call," but he has not ruled out requiring that all military personnel receive the vaccine.

"I think you’re going to see more and more of them getting it," Biden said. "And I think it's going to be a tough call as to whether or not they should be required to have to get it in the military, because you’re in such close proximity with other military personnel — whether you’re in a quarters, where you’re all sleeping, or whether you’re out in maneuvers."

The three vaccines currently in use in the United States do not have full FDA approval. They are being administered under emergency-use authorization.

At a news conference, the governor expressed alarm at the decreasing demand for the vaccines.

"It's well known that we’ve had a slowdown in the demand for the vaccine," Inslee said. “Now this is very concerning because now it is a terrible thing to think that we have vaccines to save people’s lives and not see it in people’s arms."

He said vaccinated people will be granted special access.

"These new guidelines will allow cruises to take place where everybody is vaccinated on the ship except those who can’t get vaccinated for one reason or another," Inslee said. "This is going to go into effect in mid-May. Small example of the benefits of getting vaccinated."

Inslee was asked by a reporter if vaccinations would be used as one of the metrics to encourage counties to get people vaccinated so they can have restrictions lifted or not revert to phases with more restrictions.

"It is a possibility. We’ve given thought to this," he said. "I do think in the next several weeks you’ll see increasing policies by the state and other entities, colleges and cruise lines and everything else that will create more incentive for folks. So, that is a possibility going forward."

The governor tied personal freedom to vaccine benchmarks as she was given her second dose of the Pfizer vaccine, the Detroit Free Press reported.

"On our path to vaccinating 70% of Michiganders 16 and up, we can take steps to gradually get back to normal while keeping people safe," Whitmer said

WXYZ-TV in Detroit reported concerns that people not showing up for their second dose of the Pfizer and Moderna vaccine.

One clinic said about 40% of their appointments are being canceled or rescheduled, and up to 20% are no-shows.

The Biden administration has insisted it will not issue a government vaccine passport. However, it has been cooperating with corporations that have indicated they plan to require them, working on a way to standardize a vaccine ID process, the Washington Post reported in April.

This week, the New York Times reported the European Union will reopen its borders to American tourists this summer, but visitors will need to be fully vaccinated against COVID-19.

Earlier this month, Florida Republican Gov. Ron DeSantis issued an executive order prohibiting any COVID-19 vaccine passports in his state. The move came after he denounced a proposal by some companies and governments to require that people be vaccinated to patronize an establishment.

Sen. Rand Paul, R-Ky., a practicing physician, has urged Americans to throw away their masks and oppose vaccine passports.

A vaccine passport, he said in a fundraising pitch, would "determine whether or not you're "ALLOWED" to engage in your everyday life."