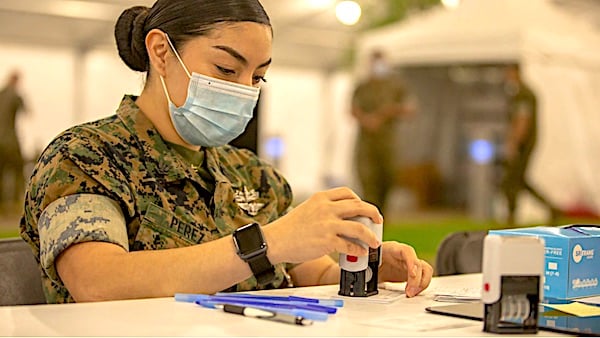 To stop COVID vaccine passports, governors and state lawmakers must target the databases behind them that collect personal medical data, contends Christopher Bedford, the vice chairman of Young Americans For Freedom.

Bedford, who also is a board member at the National Journalism Center and a senior editor at the Federalist, said that because Democrats favor vaccine passports and Republicans are two years away from regaining power, the issue will fall to the states.

State officials, Bedford said, will need to "to protect their citizens from being coerced into experimental medical procedures and surveillance databases they aren't comfortable with."

"First, there is reason to be worried no matter where you live, because this regime is coming for us. The most powerful elites in the world are enthusiastically in favor of it, and for the past year they’ve gotten their way on pretty much every single thing they’ve demanded by attaching 'COVID-19' to it," he said.

He noted IBM's COVID passport was launched just weeks after the National Institutes of Health gave the company a contract.

"Airlines, cruise lines, railways and hotels all feel pressure to meet ever-changing health regulations and rebuild travelers’ trust. Now, COVID-19 taskforces globally are asking, ‘What can we do to return to pre-pandemic capacity? How can we verify a traveler’s health status before they [sic] visit?’ … Introducing IBM Digital Health Pass," he wrote.

Germany already is on board, New York has a "state vaccine passport" and South Korea has developed one.

Airlines are at the front edge of the movement, with Emirates already on board. Air France, Alitalia, Etihad Airways and others are not far behind.

"Meanwhile, Mastercard and the ICC are partnering to see if they can make their passports work together, while Salesforce, Walmart, Cerner, Oracle, Microsoft, Epic Systems, Mayo Clinic, and the Mitre Corporation are working on a global ID of their own," he noted.

Officials in multiple states, including Iowa, Georgia, Idaho, Tennessee, Nebraska, Mississippi, Missouri, Minnesota, Massachusetts and South Dakota, say they won't issue or require one. But "they’ve stopped short of protecting citizens from being coerced by private businesses that refuse to deal with them unless they furnish proof of vaccination," Bedford said.

Only two states have banned businesses from requiring them.

"Mandates aren’t always wrong. Our society has mandated that citizens reach a certain age before they are eligible to drive, to marry, to vote or run for office. We made these decisions together. Our legislators passed them. Some private firms have their own mandates and we are happy they do, such as requiring proper attire to enter. Many of us believe airlines could use some stricter mandates on attire," he said.

But he said there hasn't previously been a similar demand for "novel and deeply invasive injections in order to do business."

There are companies, he said, "that will demand Americans submit their bodies to the vaccine and their information to the corporate databases, and that is the plain on which the battle will be fought."

"Corporate and corporate-government databases are a nightmare idea," he said. "Government-corporate databases are both a dream for hackers and a quick path to a social credit system, and the only way to retard that kind of power is to make medical mandates a terrible burden to the states and businesses that demand them.

"The way to do this is a patchwork of states that resist by banning them. Do corporations want to do business in states like Texas, Florida, and Montana? Do airlines want to maintain hubs in states that say no? Are companies willing to write off that much market share?" he said.

"While the past year has revealed that a depressing number of Americans will yield to arbitrary power wielded in the name of COVID-19, and will surely submit to both novel medical procedures and invasive private databases just for a chance to return to normalcy, moral governance ought to protect them from being coerced into that choice at all — and should protect those who still refuse from being treated as second-class citizens."

The way to fight COVID passports is to "target the databases," Beford said.

"The databases are going to have to be digital to make sense, for speed, for efficiency, and because people will otherwise forge paperwork. The only effective way to go after them will be to prohibit any sort of digital database that collects or distributes personal medical data, and to make it a crime for organizations not covered by HIPAA to make services conditional on a customer granting access to medical data," he said.

"Databases aren’t theoretical, they are here, and they are spreading among us. The time to snuff this emerging corporate-government tyranny is now — or never."