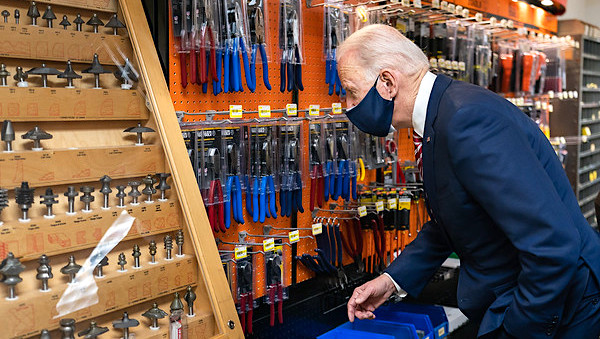 President Biden, who recently claimed Georgia's election-integrity law was "Jim Crow on steroids," even though it is more lenient than laws in his home state of Delaware, repeated the charge on Wednesday.

But this time he didn't specify which parts of the nation have returned to the Jim Crow era.

Biden, speaking at the annual convention of Al Sharpton's National Action Network, praised the organization for being "an essential voice."

The group, he said, is "[u]pholding and advancing the security and prosperity of health and well-being, dignity, possibilities of all black Americans."

"At a time when parts of our country are backsliding. The days of Jim Crow, passing laws that harken back to the era of poll taxes, when black people were made to guess how many beans – how many jelly beans in a jar, or count the number of bubbles in a bar of soap before they could cast their ballot."

Jim Crow laws, dating back to the Civil War, were repealed in the 1960s. The racial segregation measures, named after a black minstrel show character, aimed to "marginalize African Americans by denying them the right to vote, hold jobs, get an education or other opportunities," says History.com.

During Reconstruction, the website says, "local governments, as well as the national Democratic Party and President Andrew Johnson, thwarted efforts to help black Americans move forward." The laws were the foundation for segregated water fountains, restrooms, elevators, cemeteries and even bus and train stations.

Biden also has called the Senate filibuster a "relic" of the Jim Crow era.

He praised corporations that are opposing the Georgia election-integrity law and others like it across the nation.

"It is reassuring to see that for-profit operations and businesses are speaking up about how these new Jim Crow laws that are just antithetical to who we are," he said.

BlazeTV host Mark Levin said that despite "Jim Crow Joe's" past affiliations with segregationists, his offensive, racist rhetoric, his cheating in law school, and plagiarism during his presidential campaign, establishment media keeps giving him a pass.

Sharpton also has been given a pass by media. In 1987, he claimed a black girl named Tawana Brawley had been raped by a white man, prosecutor Steven Pagones. Sharpton staged rallies for her, demanding justice. But a grand jury found Brawley's claims to be false. And while Brawley was ordered to pay hundreds of thousands of dollars in defamation damages to Pagones, neither she nor Sharpton ever apologized for their attack.

Investors Business Daily said: "If ever there was a case of racial injustice it was the case of Tawana Brawley and Steven Pagones, except the roles of victim and perpetrator were reversed in the parallel universe of the racial grievance industry. The master of that universe is Al Sharpton."

While Sharpton has had to pay monetary damages to Pagones, he has "never paid in human terms for the damage done to Pagones' life, which quickly unraveled, even as Sharpton's career as a race-baiting hustler pushed him forward to his current job as an MSNBC commentator," IBD said.

Pagones' marriage collapsed, and he left his job as a prosecutor.