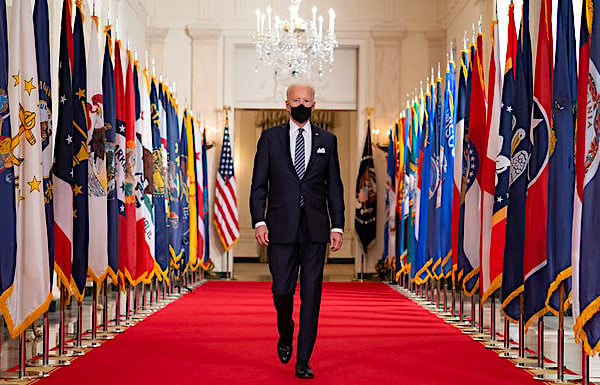 In its latest redefinition of terms, the Biden administration on Monday ordered federal agencies to refer to "illegal aliens" as the "undocumented."

Fox News reported the order came in the form of memos to the leaders of Immigration and Customs Enforcement (ICE) and Customs and Border Protection (CBP).

The agencies must avoid the terms "illegal alien," "alien" and "assimilation." Instead, they should use "noncitizen or migrant," "undocumented" and "integration."

The new language obscures the fact that noncitizens, designated by federal law as "aliens," who enter the United States without permission have engaged in an illegal act. A federal law uses the term "illegal alien."

Fox News reported a source with knowledge of the new policy said senior leadership at the Department of Homeland Security had been pushing for the change for weeks.

Columnist Sean Harshey recently noted that a "defining characteristic" of left in the United States "is their ever-shifting language."

"Nothing is as it seems, and their verbiage is forever changing as people figure out what they stand for. Even the moniker for their movement has transformed from communist to socialist to liberal to progressive and is moving back to socialist. The recent pledge by some liberal news outlets to start pushing the term 'climate emergency' in place of the previous environmental fear phrases 'climate change,' 'climate disruption' and 'global warming' is another example of their never-ending search for a label that will allow them to accomplish their goals before enough people realize what they are talking about."

He noted other examples, including "common-sense gun laws" for "banning guns," "pay their fair share" for tax hikes and "affordable health care" for "socialized medicine."

Further, "bipartisan" means the Democrats have found a GOP supporter somewhere, he wrote.

"We have reached a point where words no longer mean anything, because they mean whatever politicians want them to mean at any given moment," he said.

One of Biden's top advisers, Anita Dunn, has redefined "bipartisan."

"If you looked up ‘bipartisan’ in the dictionary, I think it would say support from Republicans and Democratsne of Biden’s top advisers," she said."“It doesn’t say the Republicans have to be in Congress."

The Biden administration also, until recently, refused to admit the surge of migrants on the nation's southern border is a "crisis."