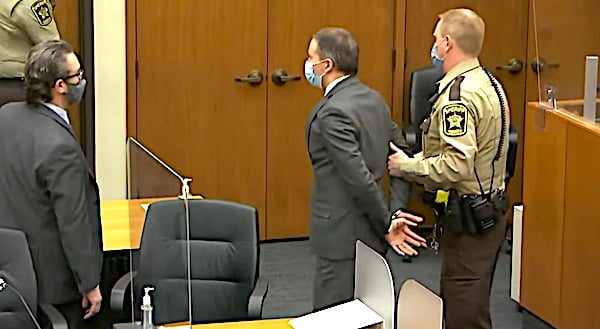 Derek Chauvin is led in handcuffs out of the courtroom after being found guilty of murdering George Floyd on Tuesday, April 20, 2021. (Video screenshot)

Derek Chauvin, the former Minneapolis police officer convicted of three counts for the death last year of George Floyd, is awaiting a sentencing hearing that could give him decades in prison.

But that likely isn't the end of the case, with commentators noting multiple grounds that could appear in an appeal brief.

The most obvious is the comment from U.S. Rep. Maxine Waters, D-Calif., who told a raucous crowd of protesters just before the jury got the case that they needed to be more "confrontational."

Her challenge was noted by the judge in Chauvin's trial, Peter Cahill, who suggested that might appear in an appeal.

He said he wished "elected officials would stop talking about this case, especially in a manner that is disrespectful to the rule of law and to the judicial branch and our function."

He told the defense counsel, "I’ll give you that Congresswoman Waters may have given you something on appeal that may result in this whole trial being overturned."

Noted legal expert and commentator Alan Dershowitz was much more confident on that subject.

According to Washington Examiner, he said, "Well, first, what was done to George Floyd by officer Chauvin was inexcusable, morally, but the verdict is very questionable because of the outside influences of people like Al Sharpton and people like Maxine Waters.

"Their threats and intimidation and hanging the Sword of Damocles over the jury and basically saying, 'If you don’t convict on the murder charge and all the charges, the cities will burn, the country will be destroyed,' seeped into the jury room because the judge made a terrible mistake by not sequestering the jury," he said.

According to USA Today, that an appeal will be filed is a "virtual certainty."

Points challenged could include, the report said, "the possible bias of jurors, the refusal by Judge Peter Cahill to move the trial or sequester the jury, or what some experts are saying were questionable jury instructions on some of the charges Chauvin faced."

Also implicated are the comments from President Biden, who said he was praying that the "right verdict" would be returned.

Further, the report said, prosecutors belittled defense arguments, accusing the lawyer of creating "stories" and "shading" the truth to the jury.

That could be considered by some as prosecutorial misconduct.

He accused the Democrat who has a reputation for making incendiary remarks, once telling a crowd to get in the faces of Republicans and tell them they're not welcome, of interfering with the judicial system.

McCarthy, in fact, wrote in the New York Post, "Derek Chauvin may be guilty, but Waters and Biden made sure this will drag on in appeal."

"Waters checked every box. As a federal representative from a California district, she traveled to another sovereign state, Minnesota, to interfere in its judicial system. Her rabble-rousing was done in violation of a curfew that the elected mayor had imposed to suppress the rioting that followed the tragic accidental killing of Daunte Wright by a police officer. And her remarks can only be interpreted as an incitement to violence — one less ambiguously provocative than the one over which she and other House Democrats impeached Trump," he wrote.

He said, "Waters’ standing as a member of Congress gives her no immunity against Minnesota’s criminal laws against obstruction of justice. She ought to be under investigation."

He added, "Chauvin’s case is more complicated than much of the coverage suggests on key issues of intent and causation. But his conviction now has a real chance of having the result overturned because public officials, who know better, have recklessly undermined the integrity of the trial."

Another factor cited is the fact that the city of Minneapolis agreed to a civil case settlement with George Floyd's family while the criminal trial was pending.

It might have been routine to reach a settlement, but the fact that the payout is $27 million undoubtedly had the weight to attract the attention of even the jurors in the case.

"The agreement was reached while jury selection in the criminal case was underway and Chauvin’s attorney Eric Nelson said the settlement had an 'incredible propensity to taint a jury pool,'" a local Fox report said.

The defense also had argued it was impossible to find an impartial jury in the city, which was rocked by violent riots for weeks after Floyd's death, and sustained hundreds of millions of dollars in damages.

Legal analyst Jonathan Turley, a law professor at George Washington University, said the denial of a venue change was significant. Sequestering the jury also is an issue.

"There are strong arguments to be made in this case. I believe Judge Cahill should have granted the venue change and also sequestered this jury. It is not clear if the court polled the jury on trial coverage, particularly after the inflammatory remarks of Rep. Maxine Waters (D., Cal.). However, there are credible grounds for challenging how this jury may have been influenced by the saturation of coverage of the trial as well as rioting in the area."