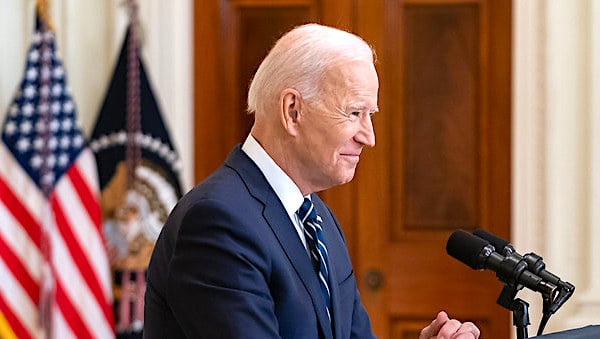 James Dobson, the founder of the James Dobson Family Institute and the host of the "Family Talk" radio program, several times has warned of the threat to America from the presidency of Joe Biden.

That would be because of the plans made clear by Biden's Democrat party for a rollback in religious rights, promotion of abortion and a requirement that taxpayers fund it and other "radical" campaigns points. Since Biden has taken office the nation has been divided on topics including race, sexual orientation, politics, spending, socialism, rioting, police and even what is a crime.

Dobson previously described the current administration's plans as "lunacy" and warned of the "moral depravity" that they would bring.

In his May newsletter to constituents, Dobson, who has advised five presidents on family issues, now says it already may be too late.

"Though I am not a prophet, it appears to me that divine judgment has befallen our nation. The evil one, Satan (who always has only been able to operate within parameters permitted by the Lord, e.g., Job 1:7, 12), appears to be unleashing his assault on our culture with even greater ferocity. He is creating chaos in our cities and schools, and is stalking the halls of government. It is as though, because we have replaced the truth with a lie, God has given us over to a reprobate mind. (Romans 1:25, 28)," Dobson explained.

"Why do I draw such a conclusion? It is because our nation is divided into warring camps, with violence and pestilence plaguing the land. Sixty-two million babies have been murdered in cold blood, and hundreds of millions of additional federal dollars have been allocated to expand the unborn holocaust. And the institutions of marriage and the family are under siege. Our birthrate is falling, and our children are being taught hate and sexual perversion in our government schools. How can a holy God look upon such debauchery and stay His righteous hand? He cannot."

He cited the conclusion of Thomas Jefferson, who said, "God who gave us life gave us liberty. Can the liberties of a nation be secure when we have removed a conviction that these liberties are the gift of God? Indeed I tremble for my country when I reflect that God is just, that His justice cannot sleep forever."

The comments came in a newsletter released to mark the Easter holiday. He said the Bible's account of the death and resurrection of Jesus Christ offers the only hope for America.

He charged that America has lost its moral compass, evidenced by the wickedness "besieging our homeland."

"I'll give you one example of the idiocy occurring today. Just weeks ago, on March 8, President Joe Biden said in a speech on International Women's Day that one of his highest military priorities is for the development of new, expandable maternity flight suits, presumably to be used so that pregnant women can take their unborn babies with them into air combat. Does that strike you as foolish beyond words?

"Consider the facts. Pilots wear heavy headgear to protect their hearing from the deafening roar of jet engines, but tiny babies, snug in their mothers' wombs, have no such protection. Nor are they shielded from jet fuel exhausts, or the enormous G forces that occur in the high-tech aircraft. Combat is horrendously dangerous, and carrier decks can be deadly.

"Has today's utter disregard for the value of unborn babies left us with no appreciation for mothers and children? Does it make sense to send them together into the wild blue yonder? When did men lose their instinct to protect and care for women and children? For that matter, when did women lose their passion to defend their babies? Even mama bears will fight to the death to protect their cubs. Does America no longer believe in the inestimable worth of a child? When did the horrors of killing become an equal opportunity assignment? Has our entire Pentagon abandoned its sense of humanity? Indeed, has our Commander in Chief completely lost his mind?"

He said Christians can be comforted that "our omnipotent God is still on His throne. He is the definer of right and wrong and He will not be mocked. We must call on Him now as America ceases to be a shining city on a hill."

Dobson, who earned his Ph.D. from the University of Southern California in child development, was associate clinical professor of pediatrics at the school of medicine there for 14 years and on the attending staff of Children's Hospital of Los Angeles for 17 years.

He's written dozens of books on the family, including "The New Dare to Discipline," "Love for a Lifetime," "The New Strong-Willed Child," "When God Doesn’t Make Sense," and "Bringing Up Boys."

He holds 17 honorary doctoral degrees, and was inducted in 2008 into The National Radio Hall of Fame.