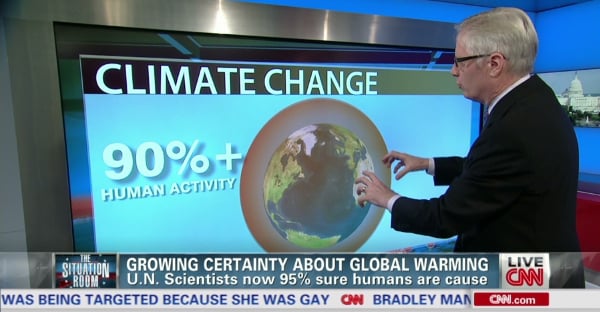 CNN is hosting a live climate-change townhall in the wake of a staffer disclosing in a hidden-camera exchange with Project Veritas that the network plans to pivot its focus from COVID-19 to climate change, noting "fear sells."

The focus over the past four years, he acknowledged, was "to get Trump out of office."

Chester, explaining that "fear sells," said it's CNN CEO Jeff Zucker who decides what the network's focus will be.

He said in another exchange with Project Veritas that climate is "going to be the next COVID thing for CNN."

Biden recently vowed to reduce U.S. emissions by at least 50% by 2030, which is more than double the commitment of the Obama administration under the 2015 Paris climate agreement.

Sachs said Biden "deftly used the occasion to set the US economy on the path of bold decarbonization by 2030."

"And all of this was accomplished by videoconference, a daily act for schoolchildren and office workers, yet and much-needed breakthrough for a gathering of world leaders."