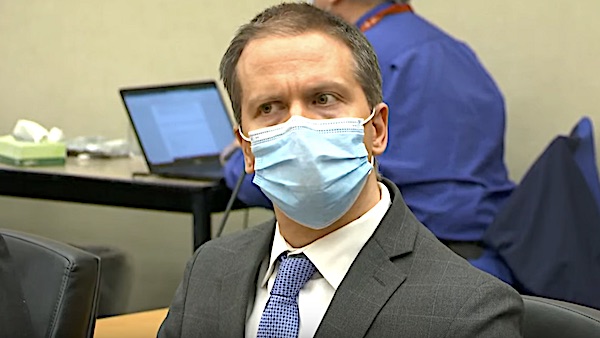 While the death of George Floyd in police custody has become the impetus for all kinds of measures to address "systemic racism" in America, prosecutors in the trial of Derek Chauvin curiously never accused the former Minneapolis officer of racial animus.

President Joe Biden, on the other hand, called Floyd's death "a murder in the full light of day, and it ripped the blinders off for the whole world to see the systemic racism … that is a stain our nation’s soul" and "the knee on the neck of justice for Black Americans," pointed out Valerie Richardson in a column for the Washington Times.

Biden is urging the Senate to pass the George Floyd Justice in Policing Act, saying Tuesday after the verdict that he wants to "sign it into law as quickly as possible."

And they chose not to include racial bias as an aggravating factor for sentencing.  Cornell Law School professor William A. Jacobson, who covered the trial on his Legal Insurrection website, noted in an email to Richardson that Minnesota sentencing guidelines list "racial discrimination" as a potential aggravating factor.

"There were no accusations by the prosecution that racism was a factor in the George Floyd case," Jacobson wrote. "Activists have exploited Floyd’s death for other purposes since the day of the incident, and that is continuing post-verdict."

Rep. Byron Donalds, R-Fla., said Wednesday in a Fox News interview it was "disgusting" that Democrats "were poised to use the verdict to springboard to the thing they really want, which is passing their agenda."

A similar investigation, of the Philadelphia Police Department, was conducted in 2015 by the Justice Department under President Barack Obama and Attorney General Eric Holder. The probe found white police officers were less likely than black or Hispanic officers to shoot unarmed black suspects.

That finding has been confirmed by many national studies. In 2016, for example, a Washington State University study found that police officers are three times less likely to shoot unarmed black suspects than unarmed white suspects, the Washington Post reported. Manhattan Institute scholar Heather Mac Donald, in a presentation last August, showed that the claim that "policing in the U.S. is lethally racist" is provably false, presenting three types of evidence: the raw numbers, individual high-profile cases and academic research, WND reported.

At the White House on Wednesday, press secretary Jen Psaki saw the fatal police shooting of 16-year-old Ma'Khia Bryant in Columbus, Ohio, as another example of "systemic racism."

But she made no mention of the fact that bodycam video released by the Columbus Police Deparment shows Bryant was assaulting a black woman with a knife.  Many critics of the White House's reaction argue it appears that the white police officer possibly saved the life of a black woman.

Consequently, she said the Biden administration's "focus is on working to address systemic racism and implicit bias head-on, and of course to passing laws and legislation that will put much-needed reforms into place at police departments around the country."

At the press briefing, New York Post reporter Steven Nelson asked Psaki if Biden plans to address his role in systemic racism while a senator for more than three decades and how it affects his current policy positions, noted Powerline blogger Scott Johnson.

Nelson pointed out that Biden is "an architect of multiple federal laws in the 1980s and 90s that disproportionately jailed black people and contributed to what many people see as systemic racism."

"One of the president’s core objectives is addressing racial injustice in this country, not just through his rhetoric but through his actions," she said. "And what anyone should look to is his advocacy for passing the George Floyd Justice in Policing Act, for nominating leaders to the Department of Justice to address long outdated policies, and to ask his leadership team here in the White House to prioritize these issues in his presidency, which is current and today and not from 30 years ago."

Nelson tried again: "Do you believe it’s important for him to accept his own culpability –"

Psaki cut him off.

"I think I’ve answered your question," she said tersely.

Powerline's Johnson commented: "Joe Biden isn't racist, the legislation he voted for wasn’t racist, and there is in fact no systematic racism other than that which goes under the name of 'affirmative action' in the good ol' USA, but no Democrat can utter any of this for some mysterious reason."