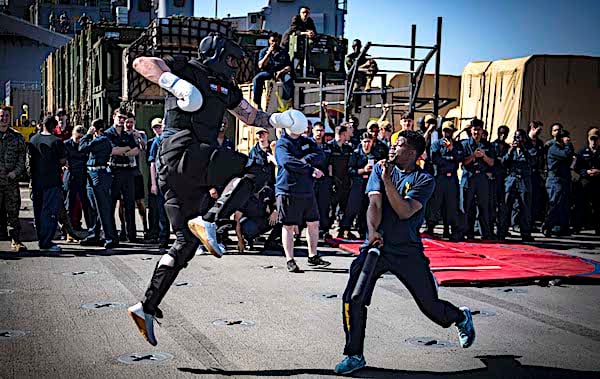 The Defense Department is promoting reading resources on opposing “systemic racism” that include radical authors as part of a program to combat extremism within the ranks of the military.

In a virtual meeting for “all hands” last month, the agenda—obtained by The Daily Signal—counted the scandal-plagued Southern Poverty Law Center as a credible resource alongside the Department of Homeland Security and the University of Maryland.

The Southern Poverty Law Center is a left-wing activist group known for labeling organizations it opposes as “hate groups.”

Authors touted by the Pentagon include radical voices such as Ibram X. Kendi and Ta-Nehisi Coates.

The meeting agenda, titled “Policy ‘Stand Down’ Extremis” and marked “Virtual Policy All Hands,” unfolded from 9 to 10:30 a.m. March 22.

Recommended resources for attendees also included several references to a video of a 1965 debate at Cambridge between influential conservative journalist William F. Buckley and acclaimed novelist-essayist James Baldwin, who wrote about the black experience growing up in Harlem.

A Pentagon spokeswoman told The Daily Signal late Tuesday that she would not have a specific response to this report before publication.

At the end of the meeting agenda, the Defense Department clearly states that it isn’t endorsing every sentiment of the authors it suggests as resources:

All views expressed by authors and speakers referenced here are their own and do not necessarily reflect the views of the Department of Defense or the Office of the Under Secretary of Defense for Policy.

The book “The Fire Next Time,” comprised of two of Baldwin’s essays and originally published in 1963, is one of the Pentagon’s recommended resources for service members.

The agenda for the Pentagon program recommends two books by Kendi, including “Stamped From the Beginning: The Definitive History of Racist Ideas in America.” Amazon’s description of the book says: “Some Americans insist that we’re living in a post-racial society. But racist thought is not just alive and well in America—it is more sophisticated and more insidious than ever.”

The meeting agenda also includes Kendi’s more recent and well-known book “How to Be an Antiracist.” Amazon’s description says, “Racism intersects with class and culture and geography and even changes the way we see and value ourselves,” and adds that Kendi’s book “will help readers see all forms of racism clearly, understand their poisonous consequences, and work to oppose them in our systems and in ourselves.”

Kendi, director of the Center for Antiracist Research at Boston University, has pushed the “anti-racist” movement, which redefines racism as a matter of equity and stresses that “assimilationists” are on a par with segregationists.

Members of Congress raised objections in March to the Navy’s promotion of Kendi on reading lists, as well as other books.

The Navy has declined to remove any books from Gilday’s list of recommended reading.

Sen. Tom Cotton, R-Ark., a combat veteran of the Afghanistan and Iraq wars, proposed legislation to block the teaching of critical race theory in the military.

Critical race theory defines individuals as oppressed or oppressor based on skin color and views history and human interactions as a perpetual racial conflict.

The agenda for the March 22 meeting also recommends the 2015 book “Between the World and Me” by Coates, an advocate for paying blacks reparations for slavery in America.

Amazon’s description says the book seeks to answer these questions: “What is it like to inhabit a black body and find a way to live within it? And how can we all honestly reckon with this fraught history and free ourselves from its burden?”

To be sure, the agenda of the Pentagon’s virtual meeting wasn’t limited to politics or assertions of “systemic racism.” It also refers to books and videos that address violent extremism, including the 2018 book “Bring the War Home: The White Power Movement and Paramilitary America” by Kathleen Belew and the 2020 book “Hate in the Homeland: The New Global Far Right” by Cynthia Miller-Idris.

Another listed resource is the 2020 book “Breaking Hate: Confronting the New Culture of Extremism” by Christian Picciolini, who was radicalized by white supremicists at age 14 and joined violent groups, but eventually found a way out. The agenda also recommends Picciolini’s TED Talk, titled “My Descent Into America’s Neo-Nazi Movement.”

In response to questions, a Pentagon spokeswoman referred The Daily Signal to 2009 guidelines on what constitutes “prohibited activity” for enlisted service members.

“No commander should be indifferent to conduct that, if allowed to proceed unchecked, would destroy the effectiveness of his or her unit,” those guidelines note.

The guidelines also call for commanders to approve “policies and procedures” developed by the secretaries of the Army, Navy, Air Force, and other military departments “to implement this instruction.”

The Pentagon issued the guidelines after the 2009 shooting at Fort Hood, an Army base in Texas.

A commander may require prior approval of publications to be distributed on a military installation through other than official outlets to determine if the publication would: (a) Create a clear danger to the loyalty, discipline, or morale of military personnel; or (b) Materially interfere with the accomplishment of the military mission. …

Commanders have the authority to place establishments off-limits in accordance with established procedures when, for example, the activities taking place at these establishments include, but are not limited to, counseling, encouraging, or inciting service members to refuse to perform duty  …

Military personnel must not actively advocate supremacist, extremist, or criminal gang doctrine, ideology, or causes, including those that advance, encourage, or advocate illegal discrimination based on race, creed, color, sex, religion, ethnicity, or national origin or those that advance, encourage, or advocate the use of force, violence, or criminal activity or otherwise advance efforts to deprive individuals of their civil rights.

The Defense Department on Feb. 5 issued a public memo regarding “extremism in the ranks” that directed commanding officers at all levels to “select a date within the next 60 days to conduct a one-day ‘stand-down’ on this issue with their personnel.”

The memo came about one month after the Jan. 6 riot at the Capitol, after which officials deployed National Guard troops to patrol a newly fenced perimeter around the building where Congress meets.

We will not tolerate actions that go against the fundamental principles of the oath we share, including actions associated with extremist or dissident ideologies. Service members, DoD civilian employees, and all those who support our mission, deserve an environment free of discrimination, hate, and harassment. It is incumbent upon each of us to ensure that actions associated with these corrosive behaviors are prevented.

The memo says military leaders have discretion in the discussion about addressing extremism in the ranks, but all should focus on the oath they take to serve the nation.

“You should use this opportunity to listen as well to the concerns, experiences, and possible solutions that the men and women of the workforce may proffer in these stand-down sessions,” the memo says.

The Defense Department information obtained by Adams includes this statement:

If we don’t eliminate extremist behaviors from our Navy, then racism, injustice, indignity and disrespect will grow and keep us from reaching our potential—an inclusive, respectful, professional fighting force that answers the nation’s call. If we must first question the intentions of our shipmate standing the watch with us, now, and especially, when taking fire, we will fail when the nation needs us most in combat.

The documents obtained by Adams, president of Public Interest Legal Foundation, also recommend “do’s” and “don’ts” to Navy commanders when engaging personnel, including:

Do be alert to statements about Prohibited Behavior (Extremism in the Ranks) which rely on inaccurate or misleading assumptions, misperception or myth. Correct these inaccuracies in a resolute, respectful manner.  … Do Not allow only a few participants to dominate the conversation.

Steven Hall and Ken McIntyre contributed to this report.