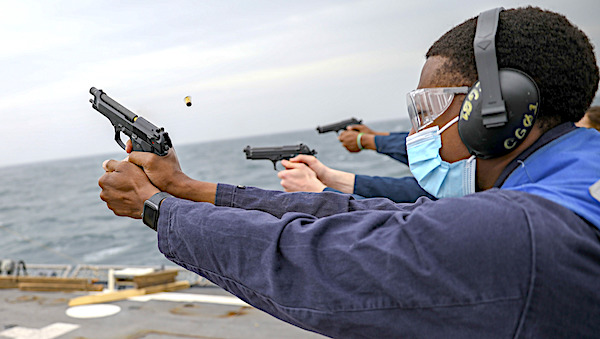 Recent tragic shootings in Atlanta and Boulder have led to a new round of executive orders from the Biden administration. Part of those orders will focus on home gun manufacture — so-called “ghost guns.” The problem is, those guns are not a meaningful source of weapons that are used for criminal activity.

The fact that someone can manufacture an “assault weapon” may scare some, but assault weapons are used in a tiny percentage of crimes per year compared to other guns. Nevertheless, they get all the headlines. This is unfortunately how gun politics plays out in America: a tragic shooting leads lawmakers to focus on the weapon that was used, invariably described as a “uniquely dangerous weapon of war.”

A shooting in white, wealthy, and suburban Boulder understandably attracts the attention of pundits, reporters, and politicians who probably reside in similar areas. In between such tragedies, however, handguns kill thousands of people per year — about 30 times more than “assault weapons” — and in ways that garner far less attention: mostly inner-city gun violence and suicides by middle-aged men. But we invariably focus on “assault weapons,” the guns that are used in the shocking spree killings that occur in otherwise extremely safe locations.

Meanwhile, in Chicago during one weekend at the end of February, 27 were shot, 6 fatally. And while we don’t have the full data, it’s very likely that a handgun was used in every instance.

There is no agreed upon definition of “assault weapon,” but proposed bans, like the federal ban from 1994–2004, usually focus on a few cosmetic features of some semi-automatic rifles. Whatever the definition, they are still rifles, and rifles are used in comparatively few murders — between 300 and 400 over the last few years, according to data covering from 2015 to 2019. That makes sense as rifles are difficult to conceal and often more expensive. Anyone who fears they may be a target for gun violence or wants to commit violence themselves is much more likely to hide a handgun in a pocket or in his waistband. Consequently, handguns are usually used in around 6,500 homicides per year.

Among homicide victims, more than half are young men, and more than two-thirds of those are Black.

But two-thirds of gun deaths in this country are suicides, and men kill themselves about three times more often than women and with guns roughly seven times more often. In suicides, while we don’t have comprehensive data, handguns are used far more often than other types, if only because it can be physically difficult to use a long gun on oneself. When it comes to teenagers, while every school shooting with an “assault weapon” is a tragedy, schools are still very safe places for children to be. A student is fourteen more times likely to commit suicide with a gun than be shot at school.

In short, gun deaths in America are primarily young Black men who are victims of homicides and men between 25–64 who commit suicide. Almost all of this death comes from handguns, yet questions about “assault weapons” and what guns scare Diane Feinstein are pushed to the fore. We debate onerous and nearly impossible to implement “high-capacity” magazine restrictions that will have no effect on suicides — it only takes one bullet after all — or crime.

What we tend not to do, however, is discuss policies that will make a meaningful impact in the number of gun deaths in America. And those policy proposals need to look beyond guns. We need to first acknowledge that America is saturated with guns, and that’s not realistically changing soon. If half of all guns in the country were eliminated, we’d still have 150–200 million guns in private hands.

But if we look beyond this performative and ineffective focus on gun laws, there are changes that would dramatically impact gun deaths. First, there is ending the war on drugs, which has failed and been a disaster by every conceivable metric. While ending the drug war wouldn’t end street gangs, it would significantly cut back on their reach and the activities that make them profitable. More importantly, the drug war has devastated inner cities by causing havoc in schools, families, and communities. It will take a long time to recover but stopping the madness of drug prohibition is a necessary first step.

For suicides, unfortunately, crafting effective policies is more difficult. Whereas guns rarely “cause” crime — in the sense that a would-be criminal only decides to commit a crime after he acquires a gun — guns can more directly “cause” a suicide. The ready availability of a gun, often mixed with substance abuse, can turn a split-second decision into a fatal one.

But suicides are mostly not split-second decisions, and in one study 38 percent made a health care visit a week before a suicide attempt and 64 percent made a visit a month before. Some have proposed that doctors should inquire into whether there are guns in the house and possibly report to the authorities. Yet this could dissuade many from seeking help. Finding the balance between helping and scaring away potential gun-suicide victims will not be easy. But we do know that offering compassionate help and support is usually the most effective way to avert these tragedies, and for good reason that is where suicide prevention experts and organizations focus their efforts.

Ultimately, however, if we’re not focusing the homicides of young black men and male suicide, we’re not seriously addressing gun deaths in America. Mass shooters get the attention, but the biggest issues are behind the headlines.

Trevor Burrus is a Research Fellow at the Robert A. Levy Center for Constitutional Studies at the Cato Institute.