In a tense exchange with Tucker Carlson, Arkansas Republican Gov. Asa Hutchinson defended his decision to veto a bill banning what the Fox News host described as "chemical castration" of children.

Carlson was referring to horomone treatments and puberty blockers that are used to "transition" from one sex to another.

Hutchinson contended Carlson was misrepresenting the bill, which passed Tuesday when the legislature overrode the governor's veto.

"If this had been a bill that simply prohibited chemical castration, I would have signed the bill," he said in the "Tucker Carlson Tonight" interview Tuesday. 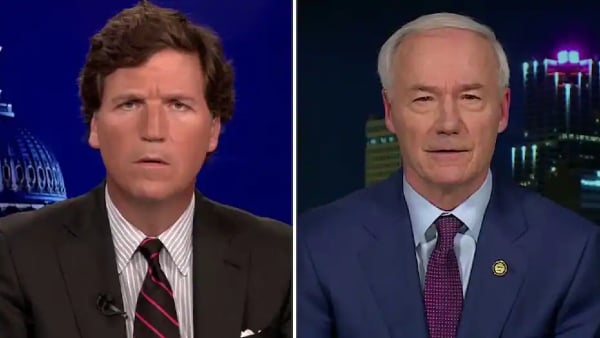 The bill bans transgender surgery for minors as well as horomone treatments and puberty blockers.

Hutchinson said he would have supported legislation that restricted only transgender surgery, which currently is not performed on minors in the state.

The bill "was overbroad, it was extreme," he said, going "far beyond what you just said."

"This is the first law in the nation that invokes the state between medical decisions, parents who consent to that and the decision of the patient. And so, this goes way too far. And in fact, it doesn't even have a grandfather clause that those young people that are under hormonal treatment," he argued.

The governor said he's heard from pediatricians, social workers and the parents of transgender youth who argue such children risk depression and suicide.

But Carlson emphasized that there is no research showing that such treatments decrease depression and self-harm, and, in fact, there are indications they make things worse. And, later in the interview, he cited a study showing "the overwhelming majority of kids who do not take life-altering hormones in the end decide not to 'transition' to a new sex."

"With respect," Carlson said. "It doesn't sound like you have studied it very deeply. I mean, this is an emerging field. There's not a lot of research. But the research that exists suggests the depression and the urge to self-harm and suicide is a component, is a side effect of taking these hormones."

Carlson cited a study in Britain finding the overwhelming majority of children given puberty-blocking hormones had the urge to hurt themselves.

"Why is that responsible medicine, to do that to children? Why would you support something like that?" he asked.

Acknowledging there are "a lot of unknowns here," Hutchison said his familiar with the British study, and he's "studied this bill and in contrast to what you just said, I spent a lot of time reviewing cases, meeting with people, listening to the experts as well as to faith leaders as well."

'This is one that crosses the line'

'The governor described himself as a "person of faith" who has "signed pro-life bills."

"I sign many bills that would be looked at as very conservative. But this is one that crosses the line. There is no need for it," he said.

Carlson asked for evidence, arguing "there is not a single study that I'm aware of that shows an improvement in the mental health of children who take puberty blockers who are chemically castrated, and you couldn't cite one.

The Fox News host told Hutchinson it appears that he hasn't done his homework.

"You are not familiar," Carlson said. "You were told by doctors that it's a good idea and you went with it."

Carlson asked if there was any corporate pressure on him in Arkansas, from Tysons, Dillard's or Walmart, which are headquartered in the state.

"I answered that question and I said, no, I have not. Do you have another question," Hutchinson said.

Carlson replied that he was "skeptical that not a single corporation in the state of Arkansas has weighed in with you, one way or the other, on this bill."

"We are alarmed by the string of policy targeting LGBTQ people in Arkansas. This trend is harmful and sends the wrong message to those willing to invest in or visit our state," he said.

"We support Gov. Asa Hutchinson’s recent veto of discriminatory policy and implore government, business and community leaders to consider the impact of existing and future policy that limits basic freedoms and does not promote inclusiveness in our communities and economy," Walton said.

"Our nation was built on inalienable rights and strengthened by individual differences. Arkansas has been called the land of opportunity because it is a place where anyone can think big and achieve the extraordinary. Any policy that limits individual opportunity also limits our state’s potential."