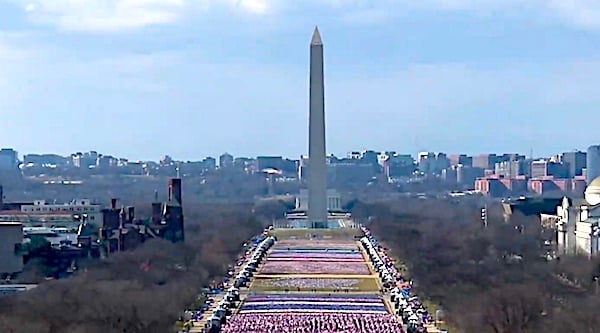 The House on Thursday voted to approve what has been described as a Democrat "power grab" – a plan to make the District of Columbia the 51st state and line up two more party members in the Senate.

It's because, the report said, "The district's population of more than 700,000 residents reliably votes for Democrats and would, without question, send two additional Democratic senators to Congress."

The vote was 216-208 along party lines but has a low likelihood of survival in the Senate, where Democrats would need at least 10 Republican senators to support their political maneuver.

Democrats have lobbied for the plan, saying taxpaying District residents are denied representation in Congress.

"Congress has the moral obligation and the constitutional authority to pass H.R. 51," claimed Eleanor Holmes Norton, a Democrat who now is Washington's nonvoting member of the House.

Rep. John Kennedy, R-La., said the strategy is simply unconstitutional, and that is known by everyone who "knows a law book from a J.Crew catalog."

"It's about Democrats adding two new progressive U.S. senators to push a radical agenda, … to reshape America into the socialist utopia they always talk about. It's not really about voting representation. It’s about Democrats consolidating their power in Washington," explained Rep. James Comer, R-Ky.,

In the past administrations run by both Democrats and Republicans have rejected the idea of statehood for Washington unless there is a constitutional amendment to allow that.

But now Democrats simply are saying they don't need to follow that procedure.

While President Biden has insisted that D.C. be given statehood, as it votes Democrat, Democrats are far less supportive of a similar plan for Puerto Rico, which often votes Republican.

The left-leaning NPR cited the racial overtones of the dispute, noting that D.C. "would be the first state with a plurality of black residents."

But the news agency fretted that perhaps not even all 50 Democrats in the Senate now support the plan, "let alone 60 votes in all, in order for it to pass in the U.S. Senate.

"This is not about a balance of power, this is about more power," said Rep. Nancy Mace, R-S.C. "This is about government-run health care, a 93 trillion [dollar] Green New Deal, packing the Supreme Court, higher taxes and a bigger, less efficient form of government."

According to Fox News, all Republicans in the House rejected the plan.

The report noted Republicans have explained "because Washington, D.C.’s establishment is constitutionally based, any change to the district must come in the form of a constitutional amendment — not legislation from Congress."

Rep. Mondaire Jones, D-N.Y., during arguments over the issue, accused Republicans of being "racist" because of Washington's black population, drawing a quick rebuke from the GOP.

Republicans immediately asked for Jones' words to be struck down, and the freshman Democrat agreed to withdraw his statements.

The same plan was approved by Democrats in the House last year, but failed to advance.