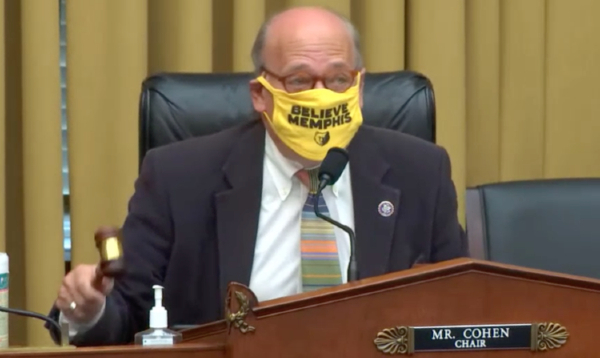 An irate Democratic chairman slammed his gavel during a House Judiciary Subcommittee hearing on voting rights Thursday after a black lieutenant governor recounted Republican leadership historically on civil rights and demanded he not be used as a "pawn" for the Democrats' election "agenda."

North Carolina Lt. Gov. Mark Robinson, a witness in the Democratic-led hearing, affirmed in questioning by Rep. Chip Roy, R-Texas, that it was the Republican Party that passed the 13th Amendment abolishing slavery, the 14th giving blacks citizenship and the 15th granting the right to vote. And the 1964 Civil Rights Act was "led heavily by Republicans."

"That history is clear, who stood on which side at every turn in history," said Robinson.

"What we want is integrity," he said. "We don't want power ... we want to have the best election system in the world."

Noting Third World countries use systems such as a painted finger to secure the vote, Robinson said "it's time to stop playing all these silly games based on race."

A Democratic member of the committee interrupted, asked the chairman, Rep. Steve Cohen, D-Tenn., to ask the witness to answer the question.

Amid crosstalk, Roy asked for a unanimous consent request to insert a document into the record.

Cohen, whose mic wasn't on, slammed his gavel, asking for the next lawmaker to begin his time of questioning the witnesses via video remote.

Roy, who was in the hearing room, asked, "So the chairman doesn't want us to be able to insert stuff into the record?"

There was more crosstalk.

"Maybe in a few minutes, not right now," Cohen said, showing his irritation with a dismissive wave of the hand at Roy.

Roy said: "Well, this is a great way to run a hearing. Impressive."

In his opening statement, Robinson noted he grew up at the ninth of 10 children in Greesboro, North Carolina, an "epicenter of the civil rights movement" as the site of the Woolworth's lunch counter protest. His mother, a woman of faith, grew up in the Jim Crow era and "witnessed first hand the made by those to ensure that black voices would be heard in government."

The suffering of his people, from slavery through segregation, was immense, he said, but today millions of black people are leaders in business, athletics, government and culture.

Mentioning Barack Obama's two terms in the White House, the lieutenant governor said those developments all "add up to an incredible story of victory."

Now, the Georgia voting law is being compared to Jim Crow laws, charging black voices are being silenced, he said. Not by bullets, bombs or nooses, but by requiring a free ID to secure the vote.

"How absolutely prepostrous," said Robinson. "Am I to believe that black Americans who have overcome the atrocities of slavery, who were victorious in the Civil Rights movement and now sit in the highest levels of this goverment cannot figure out how to get a free ID to secure their votes?"

The idea is "not just insane," he said, "it is insulting."

Robinson insisted the resistance to voter ID laws is not about justice, it's about power.

He noted that when Vice President Kamala Harris went to the iconic Woolworth's lunch counter in Greensboro, a man who was at the center of that Civil Rights protest, Clarence Henderson, was not invited.

"Why was he left out? Because he's of a different political persuasion," Robinson said.

Henderson, in a speech at the Republican National Convention last year, explained why he was voting for Donald Trump for president. He mentioned that it was the Republican Party that passed the 13th, 14th and 15 Amendments.

At the hearing Thursday, Robinson charged that the goal of some politicians is not to hear black voices but "to hear the voices that fit their narratives and ultimately help keep power with one group."

HR1, the For the People Act, Robinson said, is the Democrats' instrument for carrying that out, removing the power the Constitution grants to the states to establish election laws.

Voter ID, he said, "is our first line of defense for protecting the integrity of the right to vote.